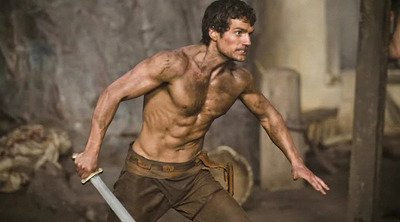 Tarsem Singh has a tremendous deficit of original ideas and prefers instead to stuff his work with constant references to art he admires, references that blur the line between homage and theft. (2006's The Fall, for instance has a moment of particularly blatant plagiarism that I'm shocked Frida's Julie Taymor didn't sue him over.) Tarsem has struggled to grow beyond his roots in music video, which is probably why his movies, in addition to being riddled with clunky acting, are overly-reliant on Extremely Cool Visuals to move the story, leading the viewer to conclude he works without a script. Frankly put, his films are mediocre at best and unbelievably pretentious.

And yet, if you've stumbled across his films, they're tough to turn away from. Sure, Tarsem is so overwhelmed by his influences that he'd rather spend millions of dollars paying tribute to them via beautiful, static images instead of telling an actual story, but in an era when shaky handheld and dim, gray realism are ubiquitous, it's nice to look at really cool stuff, even if does come off as a bit too-too. On the penultimate day of Comic-Con 2011, Tarsem and the cast of his latest, Immortals, were in Hall H for a revealing discussion of everything from 3D to Tarsem's take on Greek mythology. And... the film looks good?

'Pretentious' is generally an epithet, but it's also what happens when a well-meaning someone tries a little too hard to convince you they're totally great. When pretensions aren't accompanied by mean-spiritedness, they can be oddly endearing. Sure, pretensions are tiresome for a society like ours that prizes fake modesty as a highest virtue—it can render movies with modern themes unwatchable (see: anything about the Greatest Generation). But ancient Greece? That's possibly the most pretentious civilization in world history, one dedicated to reminding the rest of the world how completely kick-ass they were at everything. So convinced they were of their own perfection, their culture created Gods who weren't avatars of moral or legal perfection—they were more like bored club kids out for a good time. They drank to excess, started wars over the slightest insult and shagged literally anything that moved. If anything, their Gods' capriciousness and dangerous volatility is supposed to contrast against Humanity's, particularly Greek humanity, relative awesomeness. Kind of like super-powered tabloid fodder, the way we feel when we read about Lindsay Lohan. It's that kind of thinking that makes their myths and legends seem like a great fit for Tarsem's rather idiosyncratic 'storytelling.'

And based on the footage we saw (and what he had to say), Tarsem gets that. 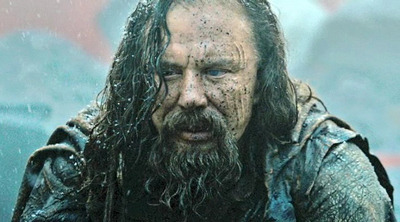 Immortals is a retelling of the Theseus legend with elements of the Titanomachy (literally 'War of the Titans) thrown in. In the convoluted Greek religion, the Titanomachy is the official backstory of the Greekoverse, the tale of how the 12(ish) gods of Mount Olympus overthrew their parents (the Titans), and set themselves up as the petulant, lustful overlords of the universe everyone knows and loves. The Theseus myth occurs much later in continuity and is notable for introducing the labyrinth, the story of Icarus and most important for Immortals, the half-man half-bull Minotaur. In Immortals, the Titan Hyperion (Mickey Rourke) has assumed a human disguise and is raising an army to free the Titans from imprisonment, in order to overthrow the Olympians. He starts a war against humanity and the Olympians, forbidden to intervene directly in any war involving humans (an actual element of the Trojan War cycle, by the by), are forced to find a human champion to do their dirty work for them. Zeus (Luke Evans) enlists Theseus (Henry Cavill) to lead the expected ragtag band of heroes to some kind of Victory.

The marketing for Immortals has, so far, not made a successful case for seeing it. Billed as, "From the producers of 300," everything from the ridiculous incidental music, 'ramping' combat and hyper-stylized imagery gives the impression that Tarsem is nothing more than Zach Snyder's DP. But while the footage shown during the panel certainly didn't downplay the connection to 300, it revealed elements that look, at least in isolation, like Tarsem is creating more than just a bullet-time version of Clash of The Titans.

The footage must be something they're particularly proud of because they showed it off twice. Taking place in a dank cavern deep inside a desert mountain, the scene shows a heavily stylized, out-of-context battle between a Zeus-led contingent of Olympians decked out in full Hoplite armor, and a motley group of Orc-ish monsters presumably in the employ of Hyperion. No story details were revealed. It only contained one line of dialogue: Zeus angrily declaring to the 'Orcs,' "None of you shall leave this place!" The bulk is a fight that ends with what appears to be the defeat of the Olympians, the death of Athena (Isabel Lucas) and an apparently heartbroken Zeus using his godly super strength to destroy two lode-bearing statues in order to collapse the cavern. The scene ends with Zeus cradling Athena in his arms as the light dims around them and from the darkness, the 'Orcs' surround them weapons drawn.

Combat in the scene is, unfortunately, a total 300 style cheese fest, lots of SLOOOWING DOOOWN and the speedingupPOW as swords penetrate armor, tridents impale multiple people at once, chains crush skulls and so forth. What saves the footage is that Tarsem's style manages to dominate even amid that ridiculous aesthetic. (And yes, I'm fully aware that I'm in the absurd position of pointing out that Tarsem's style is less ridiculous than Snyder's.) Tarsem's Gods sport matching hoplite outfits made of gleaming gold, presenting them as a disciplined, unified fighting force. It's a fantastic change from what is much more common, portraying magical ancients as a kind of mythological GI Joe, each god with a uniform that reflects their skill set. Having the Olympians appear as a faceless, identical golden army instead of, say, scaly Fish Power Poseiden or Lightning Magic Zeus(tm) makes them seem much more formidable. It also looks, in trademark Tarsem fashion, extremely cool. The golden armor lights the otherwise dark room giving the impression that the Gods' inherent power is itself providing the light.

There's also Tarsem's voyeuristic approach to gore and trauma. The camera lingers on fallen warriors, who tend to collapse in a weirdly naturalistic way as they die, a nice contrast to annoying slowfast fighting that precedes their death. It's reminiscent of his work going all the way back to the "Losing My Religion" video (think of when the priests are picking at the angel's wounds and you get the idea). The moment when Athena dies is particularly interesting. The whole scene stops to linger on Zeus' expression of shock and grief and you really get that he has been completely unglued. I'm not a big fan of Luke Evans—he seems to be making a career out of playing archetypal characters so seriously that you don't see them as people (see Clash of the Titans and Robin Hood, or the upcoming Three Musketeers)—but here, the loss is very real and captures the humanity+ aspect of the Greek gods' character which is sorely lacking from most portrayals. An emotional, totally freaked-out king of the gods is a nice departure from the usual Remote Old Bearded Dudes Of Wisdom/Anger, and I hope what we saw in the clip indicates how Lucas handles the role throughout the film. 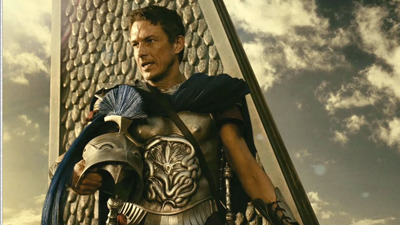 The scene also makes a strong case for Tarsem's somewhat unique decision to portray the Olympians as attractive men and women in their 20s and 30s. When asked about it during the panel, he joked, "If you were going to be an immortal, super-powered being, would you rather look like Henry (Cavill), or Mark (Canton, co-producer of Immortals)?" It's a departure to be sure—even the ancient Greeks tended to depict Zeus as a (extremely virile and muscular) middle-aged man. But it makes a lot of sense if you want to get across that before they bestrode the universe, the gods were fighters, cons, hypersexual ego monsters. Certainly more so than having them stumble around drunk a la Lawrence Olivier.

Naturally, this is but a tiny portion of the actual film and given Tarsem's track record, it's wise not to get your hopes up. Still, despite my better judgment I want Immortals to be good, particularly as I long so desperately for a movie that gets why the Greek myths are full of everything Hollywood supposedly loves. Unbelievably pretentious and terrible as Tarsem's movies may be, they're also beautiful, eye-popping, pretentious terribleness. If the Zach Snyder schtick doesn't dominate, I think Immortals has a chance—not a big chance, but a real one—of actually being good.