Comic-Con 2011: Edgar Wright and Simon Pegg Will Begin Writing Next Movie In August 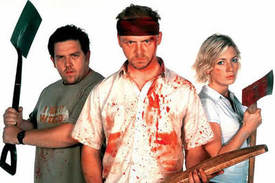 To say that fans of Hot Fuzz and Shaun of The Dead have been waiting patiently for the next film in the so-called "Blood and Ice Cream Trilogy" is a giant understatement. Shaun of The Dead dropped in 2004, and Hot Fuzz followed a relatively brisk three years later. Then four years ticked by with the creative team splitting up to do their own projects: Wright directing Scott Pilgrim vs. the Worldand Pegg and Frost starring in the alien comedy Paul. While collabos Simon Pegg, Edgar Wright and Nick Frost continue to cross paths in each other's films, the next Blood and Ice Cream movie is still off somewhere in the future. And that makes us feel sad!

Luckily, fans don't have to mope forever. During the audience Q&A portion of the Attack the Block panel at Comic-Con, a British fan asked Edgar Wright (who produced the buzzy Brit sci-flick) when he'll be getting around to closing out the trilogy. Edgar pretended to demure, then stated for the record that he and Simon Pegg are going to start writing the script "Next month," which, if you apply the ancient scientific discipline called "math" means sometime in August. Assuming, of course, that the work isn't postponed by one of the 100 other projects Simon and Edgar are attached to.

But never mind that now, let the speculation begin! The Blood and Chocolate trilogy isn't actually a trilogy in the narrative sense, since the films are entirely unrelated. What connects them is their comedic reinterpretation of old movie genres. Shaun of The Deadinserted romantic comedy into horror, and Hot Fuzz put big-city-buddy-cops into a UK suburb. So what can we expect for the final film? Our prediction: a sweeping, romantic drama like The Thorn Birds set in an arcade.