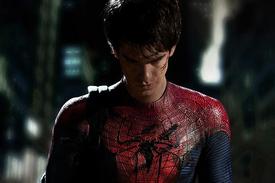 With the first trailer for The Amazing Spider-Man causing passionate reactions across the Internet, this week was the perfect time for the film's cast and crew to make an appearance at Comic-Con. Getting off to a great start is key for the Columbia flick—a July 3, 2012 release date means Spider-Man is landing smack in the middle of what may turn out to be the most competitive summer of all time. The reboot will have to face off against The Dark Knight Rises just 17 days after opening, so the first two weekends will be very important. Building enthusiasm from now until then is key. Will moviegoers trust their beloved Spidey in the hands of a new creative team? Did the team's appearance at the mecca for fanboys do anything to assuage fears that they haven't achieved the right tone? Watch the video and decide for yourself.