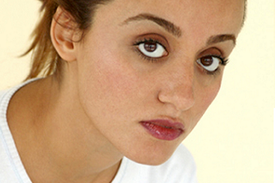 Director Tanaz Eshaghian's new documentary Love Crimes of Kabul shines a light on a women's prison in the Afghan capital where half the prisoners are held for moral crimes. The film introduces us to four inmates and their crimes: Kareema, imprisoned for pre-marital sex with her boyfriend-turned-fiancé; Aleema for running away from home; Sabereh for having sex with the boy next door; and Nasima for killing her adulterous, pedophiliac husband. Through revealing interviews conducted inside the prison, Eshaghian cuts through our own stereotypes to take a direct look at women bound—literally—by societal constraints. Boxoffice recently spoke with Eshaghian about how to make Western audiences look beyond the burqa.

What prompted you to make a documentary about a women's prison in Afghanistan?

The way the project came about was the president of documentaries at HBO, Sheila Nevins, had read an article about an Afghan boy and girl who had fallen in love and were trying to run away together to Iran and were caught, brought back, beheaded—all with the families' blessing. We were talking about doing a documentary about that, but it was in a Taliban-run area and it was just too dangerous. I tried to find something that would hit on the same subject, mainly the idea of people taking their personal life into their own hands and the possible repercussions that could have. I came across a piece about a women's prison in Kabul, and women were there for doing precisely that sort of thing—premarital sex with the person they want, adultery, basically allowing themselves to follow what they desired without thinking about the shame factor. So then the idea was let's do it inside the women's prison because it's in Kabul, and Kabul is a relatively safe place that I can go.

How did you gain access? It seems like you had a lot of flexibility within the prison itself.

You would think. Access was hell. The footage conveys the opposite, which I'm so grateful for. We were there for five weeks and I think we went there maybe 12 or 15 times and every time we had to renegotiate with everyone from the guards up front to the main guards to the female guards inside. It was just a constant, "What do you want?" "Why are you here?" "Haven't you shot enough?" "How many times can you film the same people?" It was kind of funny because they're used to journalists, and journalists get the story and they go. They're not used to the weird documentary filmmaker who's kind of trying to shoot a very fly-on-the-wall type film in a prison where access is hell. So, they couldn't figure out why I wanted to hang out with the same people. And they kept asking, "How many times can you ask the same question?" I kept telling them I wasn't. It was pretty difficult.

Do you think that was more because they didn't understand what you were doing or because they were trying to keep that stuff hidden?

Honestly, I think it's just the culture. It would almost give them anxiety if they didn't bother me. I think they just needed to bother me just to feel in control and safe, and that's what they're supposed to do.

Was there anything they prevented you from filming that you really wish you could have included in the final film?

From the prison I got pretty much what I needed, but I really wanted to film the court scenes. We got pretty close, but every time we got kicked out. They were amazing. The one that we did film was with Kareema and [her boyfriend] Firuz, and that was great. I really wanted to film Sabereh's trial and Aleema and Zia's trial and they just would not let us in. I tried everything. A friend of mine is very well connected with people in the government and they all know each other. I even tried having him call the judge, but nothing worked.

Since you spent a decent amount of time in the prison, were you able to form bonds with any of the women, or stronger bonds with some than others?

Yes. With Kareema, and also with Aleema and with Nasima, the one who murdered her husband. I think I actually really got to feel a friendship and when I was leaving they were sad, I was sad, there was a bit of crying. There was actually a relationship formed. I think if you don't form that kind of relationship with your subjects, you're not going to have a good film. That is, in my belief, a primary foundation for a good film.

What they were sharing was pretty personal. They seemed to be very comfortable in front of the camera.

The thing that me and cameraman Cat Patterson tried to do was become friends with them and just create a feeling that was natural. I think people can pick up on it when you genuinely are just trying to figure out what on earth is going on. And a lot of people respond to that when they realize your angle is not anything odd or weird, but just really trying to understand what's happening.

Will you be able to keep in touch with any of them or is that going to be pretty restricted?

I heard from Kareema about 7 or 8 months ago and she had a little boy, and she was quite happy. I tried to reach Aleema but I ended up reaching her mom, and she was still in prison. But now I heard she's out and I tried to call the number and it was no longer working. I didn't really form much of relationship with Sabereh and I think she's still in prison.

What do you hope that your audience will take away from this film?

After [viewers] leave, the women become people that they feel they know. When they walk away, they now know an Afghan woman, not just this abstract thing where they have all these conceptions, but they actually see one expressing her views with a plan, someone who is calculating and manipulating, someone who laughs, smiles, cracks a joke—it's no longer that mysterious, oppressed, silent woman in a burqa that people forget is a human being. These are women who sometimes wear burqas. They're not that weird. I think when you watch it, it's no longer Burqa Lady, it's Sabereh, it's Kareema, it's Aleema.

What struck me, especially with younger women like Sabereh and Kareema, is they're just average girls talking about boys that they like.

Right, exactly. And they're totally cute and giggly and adorable.

It was also interesting to watch Kareema because she was very calculating and clearly looking out for herself.

I know, and she is just incredible. I realized with her it doesn't matter what culture you're born in to—it's all about your character. She is going to get what she wants whether she is in Kabul or Paris. She knows what she wants, and what society wants is really not of great interest to her. And that's just character, it's incredible.

Did one story stand out to you more particularly than the others?

For me the most interesting story is Kareema and Firuz because what's actually happening there is Kareema is using a system that is generally considered to be working against you to her favor. That, to me, is incredible. Here is a woman who is using the fact that a guy cannot just sleep with you and leave you in order to get the guy she wants. I thought that was kind of amazing. It's a very particular form of feminism. She liked this guy, and he's coming from a place where it's difficult to get sex easily so he's psyched that the girl next door was climbing through his window at night. And he impregnates her and wants to walk away, and she says, "Too bad for you." What she does is she uses the system to get him to marry her and stay and be a father and a husband. Because she knows perfectly well that if they end up in prison, the only chance they have of getting out is if they get married. I thought that was kind of incredible. Someone actually told me—one of the boys who was translating the footage here in New York—that it's actually become quite common in Kabul as a trick that they use, which I actually thought was quite funny. I remember when I was in college or high school there would have been plenty of girls who would have loved to do this.

That was interesting too because at first I thought that her plan backfired on her, because it seemed as though she hadn't intended on getting into prison. But I kept watching and realized that was very much intentional.

And most of the Afghan population is in more rural areas, is that correct?

So this isn't necessarily an example throughout society, it's more specific to Kabul?

Love Crimes of Kabul recently played at the 2011 Human Rights Watch Film Festival. It will air on HBO starting July 11.