'Tabloid' Director Errol Morris: My Plan If My Subject Kidnaps Me 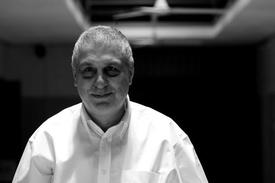 Errol Morris won an Oscar for his documentary The Fog of War where he faced down former U.S. Secretary of Defense Robert S. McNamara. His latest subject couldn't be more different. Meet Joyce McKinney, a blonde beauty queen who went to Utah for college and fell madly in love—obsession might be a better word—with a young Mormon named Kirk Anderson. But when Kirk's devout family disapproved, they shipped him off to England. Joyce followed, bringing with her a kidnapper, a pilot, chloroform and handcuffs. And she got her man. Except after a weekend of bondage and romance, Kirk called the cops. He cried rape. She cried brainwashing. Whoever people believed, Joyce and the case of “the manacled Mormon” became a British tabloid blockbuster. Tabloid is a study of media frenzy, passion and delusion. It's Morris' most slender film, but it's also his most slippery. And its loudest detractor is Joyce herself, who has been crashing screenings in disguise to decry the doc. Boxoffice asks Errol Morris if he's worried about being kidnapped.

What were your first impressions upon meeting Joyce?

I should write all this stuff down—do I even remember? I worry in interviews: Are you going to be any good? Are you going to be focused, will the story be clear? My first concern with Joyce was, is this really working? Am I going to capture her, is it going to capture the story? I'm often surprised—I probably shouldn't even say this—but when I put an interview up on an editing machine after the fact, I hear things almost for the first time. At first, I'm just concentrating so hard on making the interview happen that sometimes I can't listen to it. Does this sound crazy or not?

Like you're thinking above the interview about what to ask next?

All kinds of crazy things going through your head, yes.

Joyce comes across so candid and energetic on camera, but I could never get a bead on if she's really media savvy or really naïve?

That's one of the interesting things about Joyce. She seems to be this very odd, perplexing combination of media savvy and naïve. Where you draw that line, I can't say, but I agree with you. I think that is absolutely true—both elements.

You've been interviewing people on film since the '70s. When reality TV ascended a decade ago, being confessional on camera almost became a new form of expressing yourself. Have you seen a shift in the way your subjects act in front of your lens?

I don't think so. It's that same damn thing: it's the idea of one person telling their story. I think that part still remains more or less the same. Reality TV or no reality TV, you would think that people would be more self-conscious or more guarded or more reluctant, but that hasn't proven to be the case.

Or that people are now more aware of how to frame their story.

Or even more aware of how to frame their story. Maybe I'm just good at this thing. I really don't know what I do. I know that I am really interested in people and I think I am naturally nonjudgmental and I try not to be judgmental. I try to be there to listen, not to impose some kind of judgment on what I'm hearing. That's part of what I do.

Which helps people open up because they don't have a sense that you're pushing them in a direction.

I think that's true. I mean, I was there to help Joyce tell her story and what a story. It's a crazy story.

The story was huge in England, but Joyce fled back to America. Did the gossip jump across the pond?

No, no one cared about that story over here. They cared a little bit about the dog cloning, but what makes the story interesting to me is—of course, beyond the story itself—the mystery behind Joyce. Who Joyce is, what she was doing and why she was doing it? And she's a strange femme fatale.

If she hadn't been so pretty, would the story have been different?

Of course, yeah. Part of the story is all these men following her about.

And if people thought she was unattractive, the media might have reacted more negatively to the idea of a woman capturing, handcuffing and romancing a man.

It's hard for me to imagine an unattractive version of Joyce. I didn't know Joyce in her 20s, but these men became obsessed with her. Like K.J. [her co-conspirator] who followed her around, or Jackson Shaw [her pilot].

Was K.J. just thinking that when she tired of the Kirk quest, he could just swoop in?

What were your efforts to reach Kirk Anderson?

We tried and failed. We sent registered letters to Kirk Anderson in Utah, we sent registered letters to the more mature members of the Mormon Church who were involved in the story in the '70s. No one responded. We tried to find Joyce's partner in prostitution, if that's how you want to describe it. We could not find her. So we tried to get more witnesses, but we came up empty handed. We got those two amazing photographers, journalists, photojournalists and Peter Tory the writer, we got Jackson Shaw. I feel like I had enough to tell the story, but just barely enough.

Do you think tabloid culture is different today than it was in ‘70s?

There are different kinds of tabloid cultures. I think of the Weekly World News differently than the National Enquirer, different than The Sun, different than the New York Post and the various British Murdoch papers and so on and so forth. There are so many different versions of tabloids. I was having a conversation with a friend of mine earlier today about this whole scandal with Rupert Murdoch and News of the World, and he said "Well, there's going to be a tendency for people to say all tabloid journalism is bad, blah blah blah." But of course, it really isn't—it's a kind of journalism.

And people considered The Jungle by Upton Sinclair to be tabloid journalism when it came out.

Well, it was tabloid! Whenever you take a story and heighten it, extract certain elements, simplify it, dramatize it, is that inherently wrong? I don't think so. What's going on now with the News of the World is a different kind of story. It's not about tabloid journalism—it's about journalists who broke the law. It's not that complex a story on some level. They hacked into phones illegally, they subverted various police investigations and on top of that take parents who are worried that their daughter had been murdered—which in fact she had been murdered—and muddied the waters about whether she's alive or dead. This is not about tabloid journalism, it's about criminal behavior.

Joyce never married, never loved again. Could she never get past it simply because having "abductress" in print became her identity?

I think tabloid papers contributed to her troubles. She became caught in her own narrative, the pursuit of Kirk, the belief that she had been robbed and her desperation defined some kind of meaning in her life. One of the saddest things I've ever put on film her home footage from her backyard in North Carolina when she says "Nothing is happening," as she's pans the camera while listening to the barking of the hounds. It's an image of utter desolation.

She was so obsessed with those barking dogs, I was expecting that to escalate.

There's a lot to think about with Joyce. I've always hesitated to say the tabloids ruin peoples' lives. I don't think that's the essence of that story. However, we just happened to be talking at a time where the papers are rife with news about tabloid papers and the closing of News of the World and what that means.

Joyce isn't happy with the finished movie and she's been crashing screenings in disguise. Are you worried she's going to kidnap you?

Do you have any defenses?

No, not really. If she kidnaps me, I'm going to tell her I want to go home.

You'll be very clear from the start—no room for interpretation.