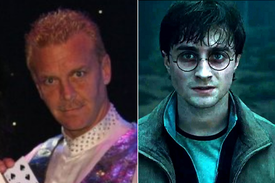 People who've heard my story always say that I'm the real Harry Potter. I started doing magic when I was 9-years-old when I saw a teacher use magic to help motivate the kids. If everyone was well behaved, the last 15 minutes on Friday before the weekend, he would stop the class and perform a magic show. I would go home and be blown away by it all weekend and I remember him coming to me and saying, "You know, you could learn how to do this." So I went to the school library and pulled out some beginning books on magic—it was funny, I remember those books hadn't been taken off the shelf in a long time-and I just started reading and learning.

Then when I was about 11 years old, due to a whole bunch of personal circumstances, I ended up in foster homes. From 11 to 18, I was in foster homes. I finally ended up in a wonderful foster home and they were very supportive for the last year and half. But the minute I turned 18, they said I had to find my own way. The only thing I knew how to do was magic. The whole premise of Harry Potter was an orphan who gets placed in a home that's very cruel to him. The only thing he has to survive with is his magic and I can completely relate to that—I remember watching the very first movie, my wife Josette looked at me and goes, "This is about you, Rick." You take away the CGI and the special effects, it's weird how similar it was to my story.

I used my magic as a survival tool. It wouldn't be uncommon for me to be woken up in the middle of the night and told I wasn't going to school tomorrow—I needed to pack everything up because I was going to be moving to another foster home. The older boys were tougher and the only thing I was able to say was, "Hey, pick a card." And it worked. So when I moved into a new school or a new home that had a lot of foster kids in it, before they beat me up, I'd do some magic and then I'd be everybody's best friend. In those years growing up, my magic really began to define who I was.

When everything was out of control, I could always sit on my bed and practice a new card trick, a new coin trick. And it would take me away. It was my survival tool. Sometimes I look at everything he went through and wonder how the author got into his imagination. I remember in the foster homes sitting up with a deck of cards and practicing for hours because I didn't want to think about the environment I was living in. I would escape into my mind of, "How cool would it be to actually cut somebody in half on stage?" "How cool would it be to travel the world and be an entertainer?" It wouldn't have surprised me if another ending of Harry Potter was that he woke up back in his foster home with his other terrible family and the whole thing—all of these movies—had just been his imagination allowing him to escape.

A neat thing watching the Harry Potter movies is that I never got to go to school for magic. Not that there weren't schools, but for the most part I learned alone. I'd save and save and save and then go buy a book. I'd dive into that book for weeks and learn everything. The idea that there's the magic school, this Hogwarts you could go to-how wonderful. That could have been a dream I had when I was a kid and the Harry Potter series put that on the screen. Once, I saw someone roll a coin over his hand and I thought, "Wow, that is so cool!" At a magic store as a kid-I thought this guy was a wizard, he did some cool stuff—he told me that my hands were too small to use silver dollars and I should probably use 50 cent pieces. I had the arrogance of being 14 and I said, "Nope, I'm going to do it." I started practicing and I just kept doing it and doing it and doing it. Five Guinness world records for high speed coin manipulation: fastest coin roll, fastest coin roll on one hand, and so on. And I only use silver dollars: 1921 Morgan silver dollars or Eisenhower silver dollars.

As I got older and I met my wife Josette who's my partner in my act, we created this magical atmosphere that allows young kids growing up in the art form to have a place to work. It's almost like we created our own Hogwarts at our house. Now that I'm back for a minute, I'm starting to go to the local magic clubs and meet the young kids. Not only showing them magic tricks, but telling them my story, telling that what I believe is important in the art form.

Our house gets filled with magicians all the time. Josette has set it up like a castle. The Discovery Channel about five years ago had a show called Monster House. They did home renovations with a theme. They heard about us and they came in and completely magic-ed out our back yard. I have a castle BBQ—my BBQ isn't a BBQ, it's a castle that breathes fire. I have a top hat bar. If you look at it, it's a top hat sitting on its top and the rim of the bar is the rim of the hat. We host magic meetings, magic club meetings, magicians that we perform with all over the world. I'm always going to LAX to pick up friends coming to stay with us.

So yeah, our house is kind of like Hogwarts. We just had the Simi Valley Magic Meeting the other week and the head of the magicians was behind the BBQ frying up burgers and there was a young magician behind the top hat bar practicing for other magicians. There were magicians sitting in a corner working on vanishing a coin, there were other magicians talking about illusions. That's what we surround ourselves with: motivated, energetic magic entertainers. As soon as you walk in our backyard, you go, "Wow!" And hey! I have a big Harry Potter movie poster hanging in the yard from the Sorcerers Stone! I forgot all about that.

A good magician—especially nowadays, and there's not as many as you would believe—needs to refocus on creating that sense of childhood wonder that these movies do so well. As a theatrical performer, that's what I strive to do: to create an emotional response, take you on a journey. Like when you sit down to watch Harry Potter, it whisks you away. On stage in a live magic show, if you know that the performers are striving for that-or you just sense it—that's when the magic has real impact.

One of my pet peeves about the Harry Potter movies is that I wish that they would just hire somebody who's really good with their hands to throw in a little bit of real manipulation—manipulation that could be done. Almost all the magic in Harry Potter is CGI and it would be cool if they would pan down to Harry's hands and a coin danced across his fingers or a deck of cards flipped and almost came alive. The magic in the movies is always based on holding a wand and saying a word. Even if he had just taken that wand and flipped it-there are guys I know who are amazing at pen manipulation and you can see them on YouTube—even that little bit of a flourish that wasn't CGI would have been great. Pointing a wand and saying a couple words, I can do that. Holy cow! I could make a good living and I'd never have to practice! I practice between four to six hours every day with high speed coins and coin manipulation. I practice when I'm watching TV, I practice when I'm on the phone. Especially when I'm out on the ships, I'm always learning new moves. I've always thought that a real true magician should be someone who practices the same way a concert pianist practices: every day to really take the art form to another level.

But the films are all folklore magic. It's not like modern day performance magic. The folklorist magic is definitely akin to what we do-there's magicians who perform in wizard costumes and we use magic wands as a tool for misdirection. Close-up magicians for hundreds and hundreds of years have used that black wand with a white tip to distract the eyes. And then you get into spells where your imagination can go wild: voodoo and Merlin and tarot cards. Of course, if I could snap my fingers and do things from Deathly Hallows, that'd be every magician's dream-how cool would it be to point a wand in a theater and go, "Zoom zoom zoomzoom zum!" and have a dragon appear?! But we have to live here in the real world.

I think anything that promotes magic is very good for the magic community. The magic community has taken some hits. Like the Masked Magician revealing secrets on Fox—that was horrible. And the more we magicians rose up against it, the more publicity that show got. After the first one, we decided to all ignore it-it wasn't worth it. But with CGI and everything, a guy coming out and doing card tricks seems a little passe nowadays. So when a Harry Potter comes along that shows magic in whatever form, I think it's wonderful for the art form. In other words, if you took your kids to see Harry Potter and then you happened to open the newspaper and see that there's a magic show at the Civic Center, I think that would help sell tickets.

But after seven films of these adventures, it's really all about the magic of the friendship and the family and the loved ones that you create around you. And I really love that about the movies because that's what my life is about: I've created my own family and my own friends and everything around me. And when you come from a childhood like Harry Potter's that pretty much devoid of love, then it's so much more magical when love comes to your life. Our photo album is off the hook with shows and adventures and friends. And at the end of his movie, he's sending his kids off on their own adventure to Hogwarts and you see he's there for his kids. He's become the father that he wished he had always had. I can totally relate to that because I've tried to do the same thing with our daughter. Going to see Harry Potter has been a tradition for our family because of the magical content. And she was in the act with us as a child. I've taken her all over the world—before she graduated high school, she'd been to Russia 16 times. When she'd tell her classmates what she did during her summer vacation, even the teachers didn't believe her. But when she turned 18, even though she was offered a job on a cruise ship, she decided she wanted to be a massage therapist.