close
INTERVIEW: A DMV employee wrestles with how to register a living car

Expert Opinion: Transformers vs. the DMV 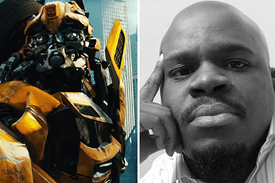 I think if a Transformer went to the DMV, it would have to be registered to a human. A car can't get a drivers license—I can't see Optimus Prime getting his photo taken at the counter. And in the picture would he be in car-form like how he'd look on the road or Autobot form? He could be registered with a title and plates. But the registration needs an owner. In Dark of the Moon, the government would have to be the owner. Like, "They work for us."

So Bumblebee would be owned by Shia LaBeouf. That'd be his owner and Shia would be listed on the reg. And on the title, it would say "Transformer." That would be their make and model: Transformer, and then what kind of vehicle and year. I don't know if the year would be their date of birth? When were Transformers born? I mean, they're older than the car that they are. What is Bumblebee, like 3000 years old, but his car is from 2007? But then he upgraded in the first movie from a beat-up vehicle to a newer one. Yeah, if they can upgrade themselves then we'd have to go with their original birth date because otherwise they'd have to get a new title every time they upgraded. And there's a lot of documentation required, there's usually a long line. There have to be hundreds—thousands—of transactions every day that we process. And people are angry because they already anticipate it being a bad time.

Would it be awkward if your best friend "owned" you? Bumblebee seems pretty compliant. I think the owning would only be on the paperwork and not their relationship. But if Bumblebee caused a lot of destruction, Shia would be held responsible—the insurance on that thing would be outrageous. They'd have to get Fight Insurance, and that would be quite expensive.

If Shia LaBeouf took his driver's test to get his license in Bumblebee, he'd have to get a restriction on his license that says he took the test in a Transformer. It won't be a full license. It'd be a Transformer-only license that says you can only operate sentient vehicles. When Shia is holding on to the steering wheel, I think it's out of habit. Because it controls itself, right? The Transformers have to make themselves a steering wheel because they're an exact replica of a real car—they don't have customization, so they even have to make seat belts. But they can't add spinners unless they see and mimic a car with spinning rims.

There will be an issue down the line if the government continues to only think of them as machines. And with them being owned. They're going to have to start fighting for civil rights like, "Listen, we want the right to vote and we also don't want to be owned by anyone." And then there will be an uprising. Like Spartacus. It could turn ugly pretty quickly because I think people do have a problem accepting that they aren't just machines. You can't tell a Transformer to go to the back of the bus when they are the bus. And then the bus squashes you. How can you punish them? There's no prison that could hold a Transformer. They even tried to kick them off the planet and the Transformers faked them out. They're kinda uncontrollable.

We'd have to register both Autobots and Decepticons. I don't think we could deny anyone the right to register a Decepticon just to keep Decepticons off the road. That wouldn't be legal to deny someone the ability to register a vehicle—especially if they owned it outright or had proper documentation. If your papers are in order, you can't be denied. Even if Osama Bin Laden had wanted to register a vehicle, if he had proper documentation, we couldn't say, "Nah, you can't register a vehicle." We couldn't say to a person registering a Decepticon, "Your car is evil." And then they'd say, "My car hasn't blown up a school or anything!" But after the fact, if your car does blow up a school, we could be like, "We're going to have to revoke your Decepticon registration." But we can't deny it.

I usually don't tell people I work at the DMV because then the questions start. Everyone has to deal with this place, so everyone has questions about what they have to do. People will be like, "Listen, my cousin needs his license and it got suspended for blah blah blah..." I really don't want to help your cousin un-suspend his license for a DUI. When people ask me what I do, I'm like, "I do boring stuff during the day, but I also do stand up comedy and DJ." I would much prefer to talk about my comedy experiences than about what I do here. Usually, that gets them away from wondering what I do during the day. Cause as soon as they know I work at the DMV, here it all comes and I'm like, "Now, you're acting like a customer and we're supposed to be friends."

I don't talk about my job in my comedy. If I was more into character-driven comedy like Jim Carrey where he does impressions and voices and stuff like that, this would definitely be an advantageous place to work. I talk to a lot of people every day. I thought the comedy in Dark of the Moon was pretty good for such an action-packed movie. Usually in a movie like this, when some action happens, someone has a cheesy line to say. That was kind of how the first one was—the comedy was cheesy. But this one was pretty funny. I liked the little robot living in Shia's house, the one with the hair. When he was talking to the department lady and she put a gun on her desk and he was all, "Oh, we're just going to pull out guns?!" And when he and the other one were in that big ship that was going down and he was like, "We about to die!" His final words. You never see him again. That had to be a joke—it wasn't sad. Okay, it's sad after the fact, but during it's pretty funny.

I don't drive a car. I ride a bus. I ride on a train. When people find out where I work and then they find out that I don't drive, they're like, "What?!" I'm used to it. There's quite a few people who don't drive in my office. I'm not even licensed to operate a vehicle. I had a permit for two years, but then it expired and I just never got another one. But public transportation is a lot easier than owning a vehicle. Especially a Transformer.