close
INTERVIEW: Directors John Requa and Glenn Ficarra talk Ryan Gosling and making the jump from I Love You Phillip Morris to a studio comedy 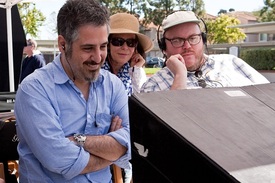 Longtime writing team John Requa and Glenn Ficarra don't shy from challenges. After cutting their teeth with four years on Nickelodeon, their writing career has veered from the kids flick Cats & Dogs to the coal-black Bad Santa to the remake of The Bad News Bears. And then they tried something really different: they wrote and directed the odd indie true crime dramedy I Love You Phillip Morris, in which Jim Carrey plays a con man determined to reunite with his love Ewan MacGregor. If that pressure wasn't enough, the duo were then enlisted to direct—simply direct—Crazy, Stupid, Love, Warner Bros.' attempt at injecting adult humor and romance into a blockbuster summer. Steve Carell plays a settled married man knocked upside-down when wife Julianne Moore has an affair with Kevin Bacon. What's a guy to do when he hasn't been single since high school? Turn to lothario Ryan Gosling for seduction advice. Requa and Ficarra tell Boxoffice how they wrangled a story in which cheaters are loveable, and the cuckolded is held accountable.

I Love You Phillip Morris, you both wrote and directed. What about this script, written by Dan Fogelman, connected with you and made you want to direct someone else's material?

John Requa: Well, when we got the script, we were just so enamored with it that it was just an easy choice. We didn't really think about ourselves as guys who do other people's scripts. The script was so good and it seemed to be coming from a place that we felt, so it was almost like a gravity. We were like, "Wow, we have to grab it now." This kind of script doesn't get made a lot in Hollywood.

With such a recent variety of romantic comedies and dramedies, what was the most important thing to get right: the tone or the style of the film?

Glenn Ficarra: It's interesting to see how far you can go in either direction and still maintain a consistency and believability. One of the hardest things to do movie-wise is to have a mixed tone, something that is most approximate to real life. It reminds people the most of real life.

The problem with approximating real life is that audiences come into a movie like this with certain expectations. They're looking for something and too many unexpected elements might turn them off.

GF: Yeah. You have to sort it through. It's like an interesting tapestry. There are certain challenges. Julianne's character, for example, is an adultress for the first five minutes of the movie, but you also want to root for her and her husband. It was all basically there, we just wanted to be sure it didn't go to far. You don't want to get unreal or into what most people think a romantic comedy is nowadays. Not that a romantic comedy is one thing, but I think when people say romantic comedies they're automatically thinking of a particular kind of movie that is pretty fluffy. We wanted to keep it off that track, not going off the rails to too maudlin or too sweet.

JR: Steve does have a persona that people associate with him. He is actually a powerhouse of an actor. From the very beginning, he was playing a certain persona and a very real character that is very different from the Andy character in The 40 Year Old Virgin. Even though that movie has roots in reality, I think Steve is always very conservative. Even though I see his public perception, you'd be really surprised to see his character and the grace that he has as an actor.

As for Ryan Gosling, he's an indie darling drawn to very serious roles. What did you have to do to entice him to jump into something uncharacteristic, especially when some on the internet were saying it was a sell-out role?

JR: I challenge anybody to actually see the movie and say that. I think that is something you can say from the outside, but I think that every good film has real substance and I think that what attracted Ryan is that this is a comedy and he wanted to be funny. I think that he got a chance to be funny, but more importantly he got an interesting character. It's a character that has great depth and actors like that. They like characters that really move and have their world shaken, and Jacob [Ryan's character] is like that. Ryan was attracted to him. He is a funny guy. You're on the set with all these high-paid actors and Ryan's the one who is keeping everyone laughing. He's just remarkably witty and so I think he wanted a chance to show that—I think this romantic comedy is natural to him while his other movies are more outside of his character.

GF: The guy has never picked an uninteresting movie in his life. From looking at his previous encounters with projects, you'd think people would go "Oh, he picked something different," as opposed to being a sell-out. There are a lot of ways Ryan Gosling could sell out and doing a romantic comedy didn't have to be one of them. He's just like us. We never thought we would be doing a movie that was considered a romantic comedy, our motto is "good is good." Something with a good script or a good situation is worth doing.

This movie is outwardly more conventional than much of the other stuff you've written. Is taking on something like this challenging?

JR: We thought that by hiring us, that was the message they were trying to deliver. That here is a movie that is really well written, that has great themes, that it could go one way or it could go another. By hiring us, we thought they were saying, "We want to go the other way. We want to try to make this something real with substance." We sort of took that as our cue and we tried to bring that into the casting and production design. Everything. You don't hire us if you want the popcorn version of a film.

GF: That being said, it's a tremendously satisfying movie. Steve, as producer early on, didn't want the popcorn version and to hire the usual guy that you hire for this kind of movie.

How easy was it to recruit this extremely talented ensemble? And what work was done to make sure to find the right actor for these parts, like Kevin Bacon as the guy Julianne Moore has an affair with?

GF: That was one of the things that we really liked about the script that we actually added to. He's not the average douche bag that she slept with. They obviously will never end up together, but we wanted to make him a threat to their marriage. This guy is what Carell's Cal was 30 years ago and he's a nice guy. Kevin really responded to that. He thought it was fresh. As far as attracting casting, it was the really great script. Steve attracted casting, too. Everyone wants to work with Steve. He's this great guy and this great actor. They were all just hopping on board. It was like going on a fishing trip and all the fish jump in.

You want the audience to root for Steve and Julianne to get back together. Does that come from the writing or the casting?

JR: You can make a wrong step either way—and in any place along the way in the casting or in the writing. You have to be very careful. It's the trickiest piece of character work in the movie. You have to make Julianne's character sympathetic even though she cheats on Steve. Everybody in America loves Steve, that has already been well established. You just have to really think about it. There were many discussions with Julianne about this and what we have to do. What we finally came to and what she finally did is there's a certain presence. There's a certain lost quality she has. They feel like this is a woman that has made a mistake, regrets it. She becomes immediately identifiable and human.

GF: We definitely had a conversation about this. She was in a moment of panic. She was having a mid-life panic. She did this. She made a mistake and she wants to make it better, but he doesn't stick around. If he would have stayed, they would have really worked it out. That's the flaw in his character that he needs to learn along the way.

JR: Which is really hard. It was really interesting and a the challenge of this movie. To make a guy who was cheated on somewhat culpable—that's not traditionally the way this type of movie would go. It's the credit to their acting and also that Steve is not just disengaged. We really go out of our way to portray that in the beginning of the movie. The thing that is happening to him is the thing that saves him. The crazy path is what ultimately brings him to be reengaged with his life. That's why the audience ultimately forgives her along the way is when they realize this is ultimately a positive thing for them. That's often how it is in life. Terrible things happen to you but those are the galvinizing moments.

There's been a resurgence in creating a strong female character for a comedy.

JR: I think it's interesting. You know, during the Depression, the number one star was Marie Dressler. She was this strong, in-charge woman. I often think that during times of social unease, people are drawn to these kind of characters. People are drawn to strong characters. If you look at the most reliable, bankable stars, it's Sandra Bullock or Meryl Streep.

GF: And there's material that is unused. You're only getting that stuff from one perspective and there's just these fertile minds of inspiration that you can see through their eyes.

It goes beyond just benevolently allowing these actors to do it.

JR: There are more women in the business. It might be a fact of that. There are more female voices in the business than there has ever been. In Hollywood, it's also fashionable. If something works, they seize it and seize it until something else comes along and then they use that for a while. So I'm sure we're going to be sick of it a year from now. We'll talk about how sick we are of female-based comedy.