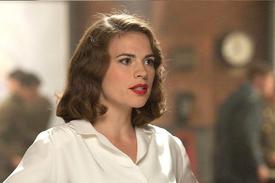 When Hayley Atwell strutted into Captain America's '40s nightclub in a tight red dress, all the soldiers' jaws dropped. And on the other side of the screen, everyone in the multiplex asked, "Who is that girl?" Here are the facts: Atwell is a UK/US dual citizen, a London theater actress who studied theology and philosophy and was born to a British motivational speaker and a father who goes by his Native American name "Star Touches Earth." But in film and in person, she's far more than that: a smart, lively and strong beauty who gushes to Boxoffice about playing lover and fighter Peggy Atwell—and how in one script draft, she could have been Iron Man's mom.

I have to ask, is it shallow that your character isn't hot for Steven until he gains all that muscle?

No! I think she loves skinny Steve. I think at the end when she pulls out the picture of him—him as early Steve—I think it's hard for her to see it because she knows what she has lost. I think absolutely it is something where she goes, "This is who I love." I think it's because Chris doesn't change in terms of his character. He obviously physically grows, but he starts off very skinny and has a vulnerability and a sweetness and an authenticity that I think appeals to her. She's up against so many men who are a pain in the ass, hence punching one of them in the face. He's something different to her.

You don't hear a lot about the women who fought in World War II. You hear about Rosie the Riveter and Mata Hari, but not much about women working within the system. Who did you model her after?

She is rare, but I wanted to show that she is a woman and she is very capable. In terms of the strength of people back in the '40s, look at Bette Davis, Katherine Hepburn—these amazing powerhouse women who are witty and intelligent in the films I love to watch. I took inspiration from their strength, really. I wanted to make sure Peggy stood tall among these men.

That genre of women who did these amazing things and were these strong, powerful people, yet their hair was always perfect.

My grandmother would always do that. My grandmother would sleep in rollers and go put her make-up on to just go down to the shops to buy some milk. And she was a working class woman in Manchester who worked at a factory, so it wasn't that she was royalty or anything. That was what everyone did back then. And my mother was the same. My mother used to drive me to school in perfect make-up with her hair immaculate, but she had a dressing gown underneath her coat. She always made sure her outer appearance was just pristine. So Peggy's kind of like, "Oh, the Nazis are coming, but I better apply lipstick."

Those hairstyles almost seem like a lost art. Who knows how to do them anymore in 2011?

You're right. I certainly don't. You've got to have a natural way with curlers first and then click it in certain ways. It takes so long. We just don't have time. We're much like a rushy culture now, we just kind of want to get things done with quick fixes for everything. We don't pay much attention to anything that takes longer than five minutes.

Have you fired a gun before?

Once. I fired just a pistol because I played Hedda Gabler. I had to figure out how to use a gun, but nothing of this kind of caliber. I loved it. I wanted the gun to be an extension of her that's just a natural part of who she is. Joe [Johnston, director] just went, "Oh, you like that? Let's get a machine gun instead."

She has a moment I like when Captain America is trying to catch a bad guy. She's trying to shoot him herself and when Cap just pushes her out of the way, she's like, "I had it!"

Exactly and they cut, unfortunately, a scene just after that where she gets up really pissed off and brushes herself off. She hails a car, drags the man out of the car, gets in the car and drives off.

When Chris Evans was supposed to be smaller, I heard that you had to stare at his chin and visualize his face being right there?

Yeah. His chin and his neck as well, which is weird. [Starts staring at my chin. It's unnerving.] I'm clearly talking to you, but I'm not connecting with you, see. There was also a scene where Chris had to squat in CGI. He would go really low so his head fit to the same backdrop of where the wall is. It's kind of hard to explain but if you imagine your backdrop and skinny Steve is only 5'6'' or something then Chris' head had to drop. It's so technical and I have no idea how to explain.

What do you think happens to your character after the film?

I'd like to think that it's her first experience of heartbreak and it will take a long time to get over it. I imagine she would probably throw herself into work even harder. Then eventually find someone that maybe resembled him in some way and went on to have many, many kids and live a happy life.

In the comic, you come back as your own niece.

She looks apparently just like Peggy but she's got blonde hair.

If future films went that way, would you do it? Would you put on a blonde wig?

Yeah! I'd dye my hair blonde probably. I'd love the opportunity to do it because the physical challenge was so fun. That would be great.

There was this kind of flirtation between her and Dominic Cooper's Howard Stark. I wished the movie had her and Stark as exes—I could see the strength of your character liking the dominance of his character.

I think that was kind of touched upon in an early draft, as well, to make Steve even more jealous which I think would be lovely to explore. I think they wanted to strengthen more the love between Steve and Peggy implying that there was an innocence about both of them—that they actually just lived for each other as opposed to her and naughty Stark. I think he's sort of a womanizer, anyway. I think I would think less of Peggy if they had been together because he's been with everyone.

But how could you resist his flying car?

But they don't hover for too long before they come crashing down!

What back story did you come up with for her? How did she get into the military?

Well, her father was in the military and I think she was brought up with brothers so she might have been brought up on an army base. I think it would have been in her blood. It would not be too far reaching to make a decision for her to join it. Then maybe she lost her brother or her father in battle and had a strong sense of justice in fighting. It was just a part of her upbringing, really. But it was nice to have a few secrets about her to make her a bit more three-dimensional.

Is it true that you started your career with a movie about Charles and Camilla?

No, I didn't. I don't know why that's documented?

I know! It was a project called Charles and Camilla: Whatever Love Means and I think I was in drama school, they needed an extra. I was an extra and then I wasn't even credited because the scene wasn't even in the film, but I really have nothing to do with it.

Yeah. My first job was a Pringles commercial when I was 18.

And what did you say? "These Pringles are delicious!"

I just munched on Pringles all day. Once you pop, you really can't stop—even after five packets.