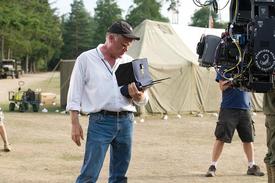 Joe Johnston needs a hit. His films have either made millions (Jurassic Park III, Jumanji) or been critical darlings (The Rocketeer)—but rarely both. With Captain America: The First Avenger, he might have scored a two-fer with a swooshing, big-hearted action flick that our critic Todd Gilchrist called, "the best superhero story you'll see this year." In this candid interview with Boxoffice, Johnston talks frankly about selling Captain America abroad and reveals that co-star Sebastian Stan who plays Evans' sidekick Bucky was second-in-line for the role—and might not know how close he came to strapping on the shield.

Chris Evans turned down the role two times. Why did you keep asking him?

We just couldn't find anyone we liked as much. We screen-tested a bunch of guys and they were great, but I kept thinking to myself, "I wish I could take what's good about this guy and combine it with what's good about this guy." We felt like if we cast any one of these guys, we would be compromising the part. It just felt like with Chris Evans, "God, that's him. That's the guy." He's got everything we want. He's got experience. A lot of these other guys had done one movie. Chris had done several things. He was more experienced and he just felt like Steve Rogers to me. He kept saying no and then we got him in to look at the art work and the art department. He spent an hour and a half just looking at stuff on the wall. It was amazing. We just talked for a while and he said, "This stuff is great. I just don't know, I just don't know." When he finally said yes he said, "I realize that I was coming from a place of fear when I kept saying no. I was afraid to do it." And whether he didn't want to get typecast or repeat the whole Fantastic Four experience, whatever it was, I think he recognized in us and me and the group that we wanted to make a fun film and that we were all going to have a fun time. I'm really careful in casting. I don't want to cast anybody who has been problematic because it so slows the process down when you have to negotiate, have to argue, have to convince them that your way is best. It could take hours and hours. One thing that Chris and I have in common, I said, "There's way too many words in the script." I said "Any time there's an opportunity to drop a line and to say the same thing another way—whether it's just a look or a gesture—that's what we're going to do." He loved that idea. He had already said yes by that point.

Did Captain America have to be an American actor?

We wanted him to be American. We did. Sebastian Stan, who plays Bucky, was sort of the runner-up.

Does he know that?

Well, he knows that we were considering him. But he was born in Romania and he has a little bit of a dark side, which I liked. I thought that's what makes him cool. I think the Marvel guys were a little reluctant because of that. They wanted him to be the upstanding guy who just wants to do the right thing, which is what Steve Rogers is all about. I think Sebastian is perfect for Bucky and if Marvel decides to do The Winter Soldier which makes Bucky Barnes come back, he would be perfect for it.

It seemed like you looked back on the old World War II propaganda-ish films, but the tone is so different.

It is different. I used Raiders of the Lost Ark as the tone of how to do a period film because it feels contemporary today. It never felt like a period film. One thing we did do in Captain America is we shot the whole film on super wide lenses because it's the way they shot films in the '40s. They didn't have long lenses. It forces you to see that whole world. You can't be selective and crop something out. If you want to do a close-up, you have to get the camera right on top of the actor. It really made a difference because even though the audience doesn't necessarily know why they recognize that this feels different. We also tried not to do a lot of fast cutting because that would make it feel a lot more contemporary. It's a modern film about the '40s. I didn't want it to feel like it was shot in the '40s, but I wanted it to have a visual style that was very much like that.

The character of Captain America is interesting because he feels like a character that couldn't have been invented today—he's so pure.

That's what makes him Captain America. He's very earnest to the point of being corny. He just wants to do the right thing. He's got that: "I'm going to keep trying to enlist if it's the last thing I do." I was always slightly worried about him being over-earnest, but I recognized after the first couple of preview screenings that that's what an audience finds refreshing today is a character like that. He does not cater to any sort of modern sensibility. He's not hip. There's nothing cool about the guy. He just wants to do the right thing. He doesn't care what anybody thinks about him. I think people can relate to that.

Tracing his character's arc in the comics, it parallels how Americans feel about war. He vanishes a few years after WWII, resurfaces to fight Communism, gets disillusioned in the '80s, and then gets killed off during Iraq.

I know—that's weird. I never wanted him to become a propaganda tool. I never wanted to wave the flag with this movie because I wanted the world to recognize that who this guy is and what he believes in is something that you could lift out of America. You could put him in any culture and in any period and he would still work. He's just a guy that wants to do the right thing. He doesn't have to be an American. He could be from anywhere.

People read their own interpretations into the studio dropping the movie title Captain America abroad and calling the film simply The First Avenger. What was the real story?

I don't want people to recognize this as being about America. The most American thing about the movie is the the title, Captain America. It's really just a story about a guy that's, in a way, a very personal story. There was a scene that took the movie out of his point of view. We went to a battle scene where Bucky and the guys were being captured by HYDRA and we took it out because it was the only scene in the movie, other than with Red Skull where you were out of Steve's point of view. It was jarring. The movie is so much from his perspective that it didn't work. It's interesting. I know in Russia, they're going to call it The First Avenger and why not?

His colors are so similar to the Russian flag anyways.

I think people around the world will know what the movie is before they go and see it.

And you make a point that the story goes beyond America. He assembles this team of people from all over the world, and then Stanley Tucci's Dr. Abraham Erskine says that Adolf Hitler attacked Germany first. It's a WWII film that's not even anti-German.

There are some very subtle things in there like that. We didn't even want to really reference Nazis. We wanted to be about this offshoot of the Nazis, HYDRA, because we create this world that the movie exists in and we have to follow the rules of that world. We can do pretty much anything we want once the audience is invested in that world. It's a heightened reality of World War II and America at the time, but I just wanted the audience to feel grounded and feel that it's real.

And if you send somebody like Chris Evans as Captain America after Hitler in World 1943, the movie would be a lot more like Inglourious Basterds.

It would be strange. That movie's been made.

So you did testing with 3D cameras and then you decided you didn't want to go that way?

Yeah, because if you shot 3D you can't control the point which you converge the two eyes. What that means is in action sequences where things are quick cut, it's hard for your eye to constantly be adjusting where the eyes converge. And with 2D you can control it. We always knew we were going to release it in 3D, but I knew that if the camera was a smaller 2D camera, I could make a better film. The 3D rig was huge. I couldn't get it into places. I couldn't move it as fast. I knew I could make a better film with the 2D camera and then converting it.

Did you ever see the Captain America movie from Yugoslavia in 1990 that only got released here on VHS and TV?

There was one in the '70s with Reb Brown. It's like a TV movie. It was terrible. And there was a Dino De Laurentis in the early '90s that starred Matt Salinger, J.D. Salinger's son. They were both pretty bad. I only watched a few minutes.