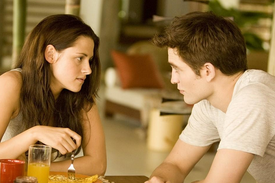 "The folks at Summit sent me the novel and I loved it," Condon explained when asked how he was first introduced to Breaking Dawn. He liked how the material gave him a chance to synthesize many different sorts of genres into one film. "It's all third act—and it could be incredibly cinematic. And the second half is a really cool horror movie."

Stewart was asked point-blank about the film's pivotal scene, the wedding between her character Bella Swan and Pattinson's Edward Cullen. "I had been ramping up to shoot that for four years," she confessed. "When I got to set, I was nervous. It was just so beautiful. I had to be locked into my dress and I had to protect it, but once I was [in the dress], I was in wedding mode." Pattinson added that the weather in Brazil made shooting their honeymoon a bit dismal. "Brazil was amazing-it was amazing the day we got there," he said. "And then suddenly it was not only raining but hurricane storms. But Bill fixed it," he joked.

Condon then introduced the first of two preview clips. In the first scene, Lautner's character Jacob questions Esme (Elizabeth Reaser) and Carlisle (Peter Facinelli) about their commitment to protecting Bella from his fellow wolfpack members—particularly Sam. When they explain that "She's part of our family," Jacob retreats into the woods, where he insists that Paul (Alex Meraz) take care of Leah (Julia Jones) and Seth (Booboo Stewart) and vows that he will kill Bella and Edward's child. "I'll be the one to destroy it," Jacob says. "I'm the only one who can. They trust me."

After the clip, Lautner explained that he enjoyed the journey that Jacob went on in these films. "He's like the Jacob you've seen before at the beginning of the film," he said. "He gets his heart crushed—he doesn't handle it very well. But he becomes a different person-he's forced to mature. I was super excited about Jacob's journey in the film."

Condon then set up a second clip of Bella and Edward's wedding night. After the sparkle vamp carries his bride over the threshold, she wanders around in their honeymoon suite and ends up in the bedroom. He suggests that they go for a swim in the ocean. She asks for a few "human minutes," and while he disrobes and walks out towards the water, she hurries into the bathroom to get ready for their first night of marital bliss. After brushing her teeth, shaving her legs, combing her hair, and sorting through her luggage for an appropriately provocative negligee, she curls up on the floor, nervous about what's to come. But when she walks out to meet him in the water, her nerves melt away, and she drops her towel and walks out towards to ocean.

Afterward, Stewart fessed up about her feelings about the birth scene. "I thought it was so cool," she gushed. "Definitely not your typical birth scene. It took two days to shoot, and a two-day labor is really hard." But she suggested that Bella was capable of surviving more than a regular person could, because, as she put it as she pointed at Pattinson, "She had a little bit of that in her—literally." The crowd laughed at her sexy entendre. As audience members began asking questions, she shifted gears and offered a few words of support to Pattinson, who has complained in the past about the vampire make-up. "You're so much more conscious of your movements," she revealed. "The contacts suck."

When Pattinson was asked his favorite scene to film, he returned to the birth scene. "It was different," he admitted. "I never get to play Edward in a way that he is so aware of his helplessness. There's no one else around and he's trying to help Bella, but there's nothing he can do. Usually Bella comes to save him. It was nice to play him totally annihilated by the situation." As for acting alongside the babies playing his newborn daughter, he fueled crushes by saying, "I really like babies, and I like doing scenes with them. As soon as you have one with you, no one can be hard," referring to his typically formidable exterior as Edward. "It makes everything more human, inevitably. They do their own thing, so you're basically improvising."

The buffed-up Lautner took questions about his preparation for the action scenes, gave shoutouts to his solo action flick Abduction, and revealed a killer moment in Breaking Dawn. "In my fight scenes I'm usually a wolf, so it's a bummer because I wish I could be doing [more choreography]. But [in Breaking Dawn], I actually got beat up a little. [Robert] gives me a nice punch after he finds out I imprinted on his daughter."

In a gracious move that surprised many Twihards who consider the films to have improved with every installment, Stewart gave a sincere nod to original Twilight director Catherine Hardwicke. Defended Stewart, "My favorite book was New Moon, but I really liked Twilight a lot. Catherine did a weird special job that made it different from the others."

And with that, the trio plus director and special guests Elizabeth Reaser, Ashley Greene, Nikki Reed and Julia Jones exited to squeals and whoops from Twihards who can't wait to get their shirtless, supernatural fix on The Twilight Saga: Breaking Dawn - Part 1's November 18th release date.