Malin Åkerman on Why She Does Indie Films: "I have some stuff to prove." 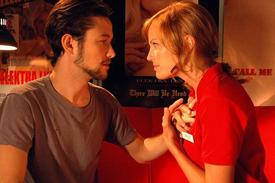 Malin Åkerman is all over the map. After small roles in Harold & Kumar Go To White Castle and on HBO's Entourage, the Stockholm-born blonde scored higher-profile projects like The Heartbreak Kid, 27 Dresses, Watchmen and Couples Retreat—each role markedly different than the last. In her latest, Elektra Luxx, Åkerman plays a thrift store clerk who falls for a porn enthusiast played by Joseph Gordon-Levitt. Though she has only a small part in this ensemble comedy, her scene is a standout and she's become a favorite of writer-director Sebastian Gutierrez who's planning to use her again for the third flick in his Women in Trouble trilogy. Boxoffice sat down with Åkerman earlier this year at the Los Angeles press day for Elektra Luxx, where she discussed finding the dimensions of her modest role, and reflected on the challenges and opportunities she's enjoyed in her career thus far.

You really have this great ability to go from one genre to another: serious stuff, action stuff, comedy. Do you have to be strategic about the kind of projects you choose to keep getting offered this variety of options?

I think you do. I mean, obviously, I can only speak for myself because I've only had my journey, but I think you definitely need to be aware of where you want your career to go. It's a business, and I really starting realizing that after I had done a few films—it seemed like they were all sort of the same genre and I got a bit nervous. This wasn't necessarily my choice to get into comedy; it just sort of happened to be one of the first things I did that anybody saw, because I did a lot of stuff that nobody ever saw. After doing a few big romantic comedies and playing similar characters, I got a bit nervous that I was being typecast. When I got Watchmen, I got to kill two birds with one stone: it's a superhero film that was a little bit more grounded. Ever since then, I've been trying to do a lot of different independent films just to sort of test myself, challenge myself, see what I am capable of. I have some stuff to prove.

Comedy—especially now—is so heavy on improvisation. When you work on Couples Retreat with somebody like Vince Vaughn, a fantastic improviser, how much discipline does it take? You can memorize funny lines, but to be able to react organically seems like a challenge.

I think that's the main thing with comedy: a lot of it is scripted, but you have to be so in the moment because if something happens, you can't not react to it. Because people will feel it, and comedy is so much more of a touchy genre than drama is. You see someone with tears in their eyes and you start to well-up yourself, but with comedy if you don't hit it off with the person you are acting with, you've lost the audience. I think it's amazing to be working with people like Vince Vaughn because they are such great comedians in that sense. Although, I have to say that a lot of the improv was done before we'd start shooting. Vince and I spent about six hours just going through every single scene trying to make it organic and find what we felt in the moment before we actually went into the moment. And, of course, after we shot a scene, on set they would go, "All right, now do one for yourselves and improvise." A lot of improv came when we were on the therapist's couch and it was really ridiculous. Vince never breaks, but he broke and he was laughing so hard he couldn't stop. It's on the DVD extras—it's amazing to watch someone like Vince not be able to keep it together.

How do you get involved with something as unusual as Elektra Luxx, that's almost like a filmmaking experiment?

Pretty much everyone in the first film, Women in Trouble, they're all friends of mine—especially Carla and Sebastian. I went and saw the screening of the first film and loved it and talked to Sebastian afterward. He said, "Actually I have a second movie and I have a part for you in it." I was like, "Great, let's do it!" Because when you're talking about a ten day shoot and I'm involved in it for one day, to do something like that with friends is so much fun. I mean if moviemaking could be like that all the time, I would totally be in. I love Sebastian's way of writing—it's fun, it's sexy and witty—and I think it's such a great comedy with a really different undertone.

When you have one day on a very fast shoot, do you have to come in already having your character defined, or is the atmosphere so casual and friendly your discover it through the process of shooting?

Of course, you come in prepared. I would never want to come to a set unprepared, regardless of if it's short, or with friends or not—it's not a joke just because it's friends. Not that you were insinuating that, but it's one of those things where it's also your face on the screen, so you want to make sure you do a good job. Of course, with this character, there wasn't much prep work to her because, you know, she's a young girl who works in a thrift store. She's a clerk, so there is not really much research. I think everything was in there with her little monologue with Joseph Gordon-Levitt's character. It's just a cute little scene they have together. But I came in prepared and knew my lines. I was extremely jet lagged because I had just come back from South Africa so maybe I fumbled a few times. [Laughs]

As difficult as I'm sure it is to be attracted to Joseph Gordon-Levitt, what's your threshold for a guy who's knowledge of pornography ventures beyond a healthy familiarity?

I had this sort of back story where he came into the drug store a few times, charming the pants off me, and then I learned that he was a blogger. I don't think it mattered so much because he talks about it in such an intellectual and passionate way, with such an innocence about it. It's not in a creepy, weird way—he's just fascinated by the history. I think he thinks it's just really beautiful and innocent more than gross. You know what I mean? I think he's just really charming and she's enamored by him and his personality and then ultimately, she doesn't mind because there is that trust factor and also it's no threat because she never thinks he's going to end up being with a porn star.

When you come into a movie like this where you're one part of a larger ensemble, how much do you focus on the overall tapestry? Or is Sebastian responsible singularly for guiding you to know exactly where you are?

I think it's a bit of both. Of course, Sebastian has a very clear vision of what he wants, which I love in a director. I came in with my ideas and he goes, "Okay. Yeah, yes, yes and no, not that. Let's try a little bit more of this." For the most part, I think it's always a relationship between the actor and director, and hopefully they both have really good ideas and you kind of tweak it and get something that works. I think the director always has a clear vision of the arc of all of the characters-because sometimes we lose the plot. They have to come in and hone us in.

You've done way bigger movies than this—Zack Snyder's Watchmen, for one. Did Elektra Luxx exercise your creativity in a different way?

Every new role exercises your creativity. I think whenever you're given an opportunity for something different, you take it. I just love to be working. It's like you want to exercise your acting muscle all the time, keeping it going. And if you get an opportunity, then go for it no matter how small or big the role is.