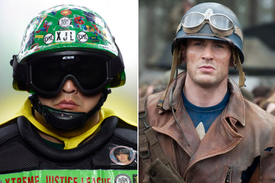 Everyone knows Captain America, but only a few try to be him. They call themselves the Real Life Superheros and they number 200 men and women across the States. Of their ranks, these four—Dark Guardian, Master Legend, Superhero and Mr. Xtreme—are among the most famous, and between them they show the range of people pressed to put on a costume to patrol—and protect—their neighborhood. We'll be introducing you to one a day as we lead up to Captain America's release asking what made them them suit up. Today, meet a hero influenced by the Mighty Morphin Power Rangers and ultra-violence. Presenting: Mr. Xtreme.

MOTTO: "If there's a life at stake, no matter how dangerous it gets or what the odds are, get involved."

BEFORE THE HERO: I was a victim of violent crime. When I read the news and see all the other people getting victimized, I take that very personally.

ORIGIN: I was thinking, "What if someone put on a costume and went out and started helping people?" I Googled "real superheroes," and the World Superhero Registry came up. I knew I wanted to form a group and one day, I was sitting at a Starbucks looking at the logo on the cup and remembering the Xtreme Football League. I came up with the name Xtreme Justice League and I said, "Well, why don't I call myself Mr. Xtreme, like Mr. Fantastic from the Fantastic Four?" Also, I think my actions are somewhat extreme. I think the average Joe and Jane wouldn't put on a costume and put themselves in harms way to help people and not get paid for it. I'd be willing to lay my life on the line to save a victim from a violent crime.

COSTUME: I drew the influences from the Power Rangers and the Ninja Turtles. It's meant to look outrageous and ridiculous and silly-it's designed for high visibility because I'd rather deter crime than have violence. It's 30 pounds of gear and offers quite a bit of protection.

WEAPONS: 1.5 Megavolt stun gun, pepper spray, pepper blaster, handcuff, Tigerlight T-100 light with pepper spray. I've only had to deploy my pepper spray once. Me and my partner Urban Avenger were assaulted downtown and he wouldn't let up, so we had to use it.

FIRST TIME ON PATROL: I was nervous, I was scared. I still feel like that today, but it's not as intense. But I still have those moments where I get the butterflies in my stomach. Now, I've dealt with hecklers for many, many years so I've trained myself to block it out and not let it bother me.

MEMORABLE DAY: Last year, we helped the San Diego police make a citizens arrest. These two guys were fighting in front of a bar and we just helped in and held them down and detained them. The police were pretty thankful and it was great to be able to work with them hand-in-hand.

REAL LIFE IDENTITY: I do have a life outside of being Mr. Xtreme and I want to keep it a separate life. I try to keep my name a secret. I don't want my boss finding out or the guy that works on my car because it'd be kind of awkward. I'm a grown man in my thirties doing this and people tend to be pretty judgmental.

A big misconception is people think we're nutjobs or we're crazy. Actually, maybe it is a little crazy, but in a good way. I'm not that different than anybody else. I have a job, bills, relationships and debt like everyone else. I just take the time to serve my community. I've trained for jujitsu tournaments and grappling, I do uphill sprints for endurance and stamina. I'm not in the greatest shape, but if I didn't do any training at all, it'd be quite a bit harder. I call my fighting technique Ultra Violence. It's based on WWII combat techniques where you're trying to attack the vital points to disable them as quickly as possible. Eye gouges, rips, tears, striking the vulnerable parts of the body with a lot of aggression.