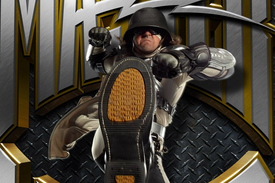 Everyone knows Captain America, but only a few try to be him. They call themselves the Real Life Superheros and they number 200 men and women across the States. Of their ranks, these four—Dark Guardian, Master Legend, Superhero and Mr. Xtreme—are among the most famous, and between them they show the range of people pressed to put on a costume to patrol—and protect—their neighborhood. We'll be introducing you to one a day as we lead up to Captain America's release asking what made them them suit up. Today, meet a wildman who's been a caped crusader for 30 years ever since he made a mask to punch a bully in the nose. Presenting: Master Legend.

BEFORE THE HERO: I was born with a veil—a membrane over your face that's got some legendary tales about it—and I died the moment I was born from suffocation. That's when I knew I was different. Not better—I always wanted to fit in with the crowd—but I was the guy who would fight the bullies. I was badly abused at home as a kid by my daddy, and my mom, too. Very evil, horrible people.

ORIGIN: I grew up in Louisiana in the swamps. My momma was into witchcraft—she was a real Louisiana witch. My daddy put me through all these fighting classes when I was a kid, making me fight in the Ku Klux Klan. They had bets on the line and we'd have to fight our friends wearing masks so we didn't know who we were fighting. Busting noses, hitting skulls. Hardly even in first grade and I had to do that stuff. So when I was in school, I didn't like kids getting abused. I was already reading comic books and getting myself prepared because I already knew what I was going to become.

COSTUME: I've always worn silver and black and I know the value of armor. The costume is still evolving, but it will always be silver and black. I wanted a cape because it's traditional. When kids see me in a suit, they know they're looking at a guy with real muscles and no steroids.

WEAPONS: Shock devices, throwing stars, chains, bats. But I don't like to carry weapons—I am the weapon.

FIRST TIME ON PATROL: There was this bully in school who was punching kids in the stomach and pouring milk on their heads. It was first grade and I knew that wasn't right. He did it to me once and I punched him because I knew how to fight. I got in all sorts of trouble because his momma worked in the school and he got privileged treatment. Captain Midnight was born—that's who I was gonna be, and I became him for many years. I made myself a mask out of an old black t-shirt. I ripped it up, cut it up, laced it up and put in two eye holes. Then I had a tight blue shirt and some silver material and I cut it into a moon and star and glued it on my shirt. That day, I had it tucked away in my backpack. He was up to his tricks again, so I jumped around the corner, put on my mask and shirt, and then jumped him, beat him up like, Pow! Ran and hid and took off the shirt and mask and stuffed them in my backpack and walked out like I didn't know what was going on. From that day, I knew that was how I was going to handle evilness.

MEMORABLE DAY ON THE JOB: There was this hypnotist guy who was brainwashing children and making them steal. I knew he had these butterfly knives—and he was pretty good with them. I took my friends to go fight him and each one of us had an Iron Fist. I taped magazines all over myself and sure enough, when he tried to stab me with those butterfly knives, he was cutting and slicing them, but couldn't hurt me. He was amazed that when he tried to slash me with a knife, I wasn't scared. I whacked him, knocked him out, kicked him on the head. When I knocked the knives out of his hand, he knew he was going to get a beating.

REAL LIFE IDENTITY: Secret. A few people know who I am, but they don't even know my last name. I stay alone, I live alone. I don't have no family to have to deal with.

I was fending for myself ever since I was 10-years-old, working, still trying to go to school, paying for my own clothes. I was out on the streets all the time. I used to run away to the woods—I was a super-survivalist and had all these books on how to survive in the woods. I had a motorcycle at 15. I was already emancipated. I got my GED at 16 and was going to trade school for welding and started making all these weapons like the Iron Fist. People knew me as The Legend because I did all these crazy things: motorcycle stunts, diving out of trees, jumping off of cliffs, letting motorcycles pull me on sleds, swinging on ropes and landing on mattresses. I've had so many injuries, I should be occupying 100 wheelchairs. The name Legend carried, even though I still thought of myself as Captain Midnight. I met this guy who worked at a youth camp and he said the kids would love me, I should go out there and tell them about my hard life and be an inspiration. I brought a whole stack of boards—that's a way to please boys every time—and showed them some karate/kung fu tricks. They liked me so much that they started calling me Master Legend and I was calling them my disciples. The counselors didn't like me anymore—they thought I was teaching the kids violence, so they kicked me out—and years later when Captain Midnight had to move on, I was in a bad spot of depression. This was 20 years ago. I was giving up on the world and I gave up on the superhero stuff. But then a kid almost got hit by a car and I saved him with my super speed. And then I saved a bunch of kids from a child abuser. And I thought, “The rest of my life might be gone, but I'm still Captain Midnight.” And then this voice in my head said, “Why not Master Legend—that's what all the kids know you as.” I left the old Captain Midnight behind me and renewed a vow as the superhero Master Legend.