close
INTERVIEW: The How I Met Your Mother star on acting against imaginary creatures 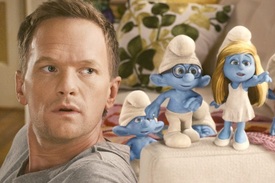 For how familiar his face is, it's surprising how few film roles Neil Patrick Harris has taken on—especially when half of them have been merely lending his voice to Cloudy With a Chance of Meatballs or Cats and Dogs: The Revenge of Kitty Galore. But now the tables have turned. With The Smurfs, Harris is one of the few human characters in the film, logging in more facetime than in almost any other of his movies. Boxoffice asks Harris what made him squeeze Smurfs in during his intense TV career and what are the CGI mechanics of trying to attack an invisible Smurf.

You have a lot of die-hard fans. Do you think they're going to come see this movie?

I hope so. I think a lot of the people who are fans of mine were fans of The Smurfs back in the day. I would hope that people that were fans of mine that didn't know The Smurfs trust that I would be doing my thing in this movie and it's not just some little kid's movie I did because I was free for a month.

You have a heavy resume with TV work. Why choose to make your rare big screen appearance with The Smurfs?

I don't get to choose things. I'm usually auditioning for things I don't get and this was a big offer. I didn't want to jump at it too quickly, but I think it's no secret that the film world operates via lists and the studio or filmmakers will agree to hire you if you're on this list. Those lists are often created by how much money you've made on your previous projects. So strictly financially speaking, The Smurfs was a really good opportunity to get up the list a little bit so maybe I would get to do more movies with amazing people in the future.

You could see that you and Jayma were friends-how do you think that helped you in the process?

It just worked out that way, fortunately. She makes everyone around her smile. I was thrilled that we got along so well off camera because it just made the days goes by that much faster and it certainly made it more fun to act alongside her.

How would you describe your relationship with Jayma in the movie?

In a movie like this you quickly have to establish who is in a relationship and why. I wanted right away for you to know that we were in love and that we were a couple without having to say, "I love you, honey." I like couples who amuse each other. He'll say something clever and she'll say, "Nice, I like that." They are just regular people having a nice, sweet conversation. I was angling towards that '40s banter like Nick and Nora of The Thin Man.

You have twins of your own. Did that help you play a father figure to the Smurfs?

I appreciated that when the movie was coming out and when it was going to be released that I would be a father. I thought it added legitimacy to them casting me. I think potentially if I would have not been a father, people may have thought that I wasn't going to be a dad, but the fact that I am makes it more so.

Was there any improvisation allowed between you and Jayma or did you have to stay on script because of the invisible Smurfs you had to interact with?

A little bit. We were constantly trying to crack each other up. Sometimes I would say little things under my breath in addition to my line and she would do the same. We were never able to do much more because there were so many other elements, but we both thought it was really important that we seemed like we were an active in love couple so we always tried to keep ourselves amused.

Doing CGI combined with the live-action, what did you learn about it and what were some surprises?

I was surprised with how much freedom we had so long as we did certain things right. When I was whacking at Smurfs with an umbrella I thought I would have to be really particular about where I was hitting. When we were filming I would just go crazy and with the take they chose, they would just put Smurfs around it. So there was actually, weirdly, a nice freedom when we were filming.

Since the Smurfs obviously weren't there on set, what were some of the challenges working without someone to actually have a conversation with?

You had to look sometimes really far away even though the Smurf was supposed to be right in front of you. It takes you out of the moment a little bit when you're supposed to be talking to someone 12 inches away but your focus is 12 feet away. That was a strange kind of unique element to The Smurfs. I think there are a lot of actors though now who have had to experience that. We should probably commiserate together about it over a drink.