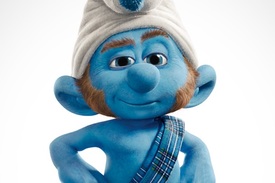 Why was Gutsy, a new Smurf, created?

I think they needed sort of a force—a rallying force of the Smurfs. He is sort-of second in command to Papa Smurf. He allows Papa Smurf to be frail and old. They need a team leader to be there.

Well, he makes him more frail. Papa Smurf used to be the leader of the Smurfs but part of this story is that he is getting a bit older and sort of losing it in a way, so you need another character to bring that energy and Gutsy's that guy.

Did you feel any sort of Scottish pride playing the Scottish Smurf?

Absolutely, yes. I'm really excited about it actually, to be the foreign smurf. I'm bringing stuff back from Scotland, too. No one uses "numpty," and now they will because I say it in this film. I'm sure people in Scotland will be quite glad that we are expanding on the ancient Scottish language. With the script I read, I thought he was this sort of boisterous person. I came into the studio and he had a kilt and red side burns and I thought, "Great!"

Everyone expects Gutsy to be the hero, but he fumbles. What's the significance in that?

It's very careful to make it clear that everyone, although they have flaws, can actually still help out. It's a very positive message and it's because no one wants Clumsy, but he in the end proves he's useful. It's nice. I has this very positive way in what it says to the world, but in a way that's not what you would expect.

You've said you saw The Smurfs as pop culture icons growing up?

They were literally pop icons because they were on the charts. [In 1977, Dutch musician Father Abraham's “The Smurf Song” was #1 in 16 countries.] Many people in America only know the "Fa-la-la" song. In the script, there was that song—but I sang the one that was on the charts.

Your resume for acting is very eclectic.

I just liked it. I like being a part of big cultural films like this. It's fun. I also do things like this because it's good for my godkids. Everybody likes the Smurfs. It's not just that girls like them or boys. Also, I like doing these voice over jobs because they're kind of easy. They work around you.

Did you go directly from The Good Wife to this?

These roles are all so different. How do you transition from one project to the next?

It's easy. Sometimes when you do two or three things at a time, it gets a bit schizophrenic. I always think about being a child. If you're a child, in the morning you pretend to be a dragon and then in the afternoon you're a princess, you know, and then you're a dog. That sort of stuff.

So acting allows you to be a big kid?

I do feel like a big kid. Actually, that's why I feel like a pretty good actor. I don't apologize and I don't make it too complicated. I just try to be right there in the moment and I think that's quite distinctive. I think that's the way to go. I don't agree with mythologizing everything and over-complicating it. You should be free. I don't mean to bring down how others process things, but I just don't think it's for me. When I'm acting, I try to do it like a child would do it.