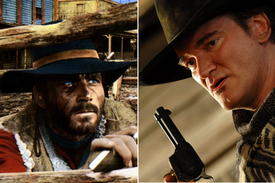 Iconic Italian actor Franco Nero, who plays Uncle Topolino in Pixar's Cars 2, told Boxoffice that Quentin Tarantino is set to play a role in his upcoming spaghetti western The Angel, The Brute And The Wise. "I made him sign a letter of intent saying that he would do the movie," Nero said via telephone. "I am sure that very soon we will do it." Meanwhile, Nero clarified that he currently does not have a confirmed role in Tarantino's next directorial effort, a riff on Nero's iconic Django character, despite rumors that he was to star in the film. "I was in Berlin with Vanessa [Redgrave] for Coriolanus, and Harvey Weinstein was there and he said, ‘Oh, Franco—you're going to be in Tarantino's movie, eh?' And I didn't know anything."

Nero made a spectacular breakthrough early in his career with Django, a film which piggybacked on the success of Sergio Leone's Dollars films and went on to be one of the highest-grossing films in the world. He subsequently appeared in films from directors from all over the world, making him an international superstar and a cinematic icon. Nero said that despite Tarantino's obsession with cult icons like himself, it took considerable time and effort to get the two of them together.

"It is a very funny story," Nero explained. "Two years ago I was doing a movie in Spain for Miramax with Penelope Cruz. She played my daughter in this movie called Talk of Angels, and she went one day to San Sebastian to the festival, and she came back the next day and said, 'Franco, there was Quentin Tarantino, and when I said to him that I was doing this movie with you, he said "bring him here! I want to meet him!'" So that was the first time I knew he really loved my work and followed my work. [And then] at the opening of Kill Bill in Italy, and Weinstein went on stage to present the movie and said [Tarantino] was sick and he couldn't come, but he said, "he begged me to say if Franco Nero was in the audience, please say 'Hello.'" So finally, about two years ago, he came to Rome and he said to the production, 'I need to meet Franco.' Finally they got ahold of me and we had lunch together."

In the process of the two of them swapping stories, Nero proposed the idea of Tarantino appearing in the film he was developing. "I said ‘Quentin, we are going to do a western. It would be an homage to Sergio Leone and John Huston, the director that discovered me, and would you be so kind to play a cameo?' And he said, ‘Oh yeah! What do I have to do?' I said, actually there are three bandits, and I have to kill them all, and he said, ‘oh, great, so I can come with Robert Rodriguez and my friends to play them.' I said, yeah! That would be great! He said, ‘But how are you going to kill me?' I said, I'll tell you—with a shotgun, and inside, instead of having bullets, it will be gold coins. He said, ‘I love it!'"

Nero noted that the confusion occurred between his project, The Angel, The Brute And The Wise, and Tarantino's Django, when he visited Los Angeles for a series of Italian films at the American Cinematheque. "I came to America in February and some newspapers wanted to know. They said, are you going to be in Tarantino's movie? I said, I don't know. So this story said, "Franco Nero will be in a Tarantino movie, and the movie's going to be called Django." But I don't know.

Nero also said that Tarantino mined him for information about Sergio Corbucci, director of the original Django, so he knows that the filmmaker's project will be heavily influenced by his work. But as of right now he's uncertain whether he'll appear in the film. "Every time Tarantino and I spoke he wanted to know everything about Corbucci, the director of Django. And so I think he is going to do this Django because of the movie I made many years ago, but I don't know if he will offer me the film or not."

Regardless of which of the two projects they collaborate on first, Nero said that he's confident that he and Tarantino will work together soon. "I hope that Quentin will ask me to be in the movie," he said. "I would be very happy, of course."