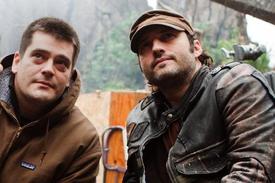 On Thursday, multitalented filmmaker Robert Rodriguez appeared in Comic-Con's Hall H to announce two new business ventures and update his fans on a variety of film projects he has in the works. Friday morning at San Diego's Hard Rock Hotel, Boxoffice sat down with Robert Rodriguez for a short discussion about his upcoming projects, including Sin City 2, his remake of Fire & Ice and a relaunch of Heavy Metal, the adult animated film anthology which director David Fincher resuscitated a few years ago.

At the panel you mentioned you had an interesting idea for shooting Sin City 2 in 3D. Can you offer any more specifics about what you're planning?

I don't want to get into too much detail so no one steals my idea, but nobody's done it yet.

Would it maybe be anything like Speed Racer? That movie was 2D, but the backgrounds were very deliberately created almost like a cartoon.

It seems like it could be similar. I like what they did there, but that wasn't in 3D. Just the way I would use the 3D because it was a comic book with panels, there's some really cool stuff that could be happening. You wouldn't get away with another movie, basically, because it doesn't have that same source material.

The logistics of shooting an ensemble piece much be difficult. What allows you to be able to shoot all of these individual components and bring them together into a cohesive whole?

Shooting things separately? Yeah. Like in Sin City, Rutger Hauer and Mickey Rourke were shot even though they have a conversation like this, it's eight months apart. But it's because I've always been trained as an editor. I always edit my own material, and I'm my own cinematographer, so usually whenever I line up a shot I kind of know how I'm going to block it out or line it up even if the other actor isn't there and we shoot it out of sequence by a lot. So the cohesiveness comes—it's just like layering. You get used to layering like when you do a photo in Photoshop and you do all of the different layers. That's how you do we do it in filmmaking for me now.

When you made Sin City, using all green screen environments was a unique approach. Is that the way these movies need to be made, or is it just the best way to connect the two films?

For this one, it's still the way to do it, to have real actors, and make the backgrounds as 2D as possible and stylized as possible.

You showed some concept drawings for your remake of Fire & Ice, but how much progress have you made adapting them into animated sequences?

Have you considered using rotoscoping in the way that Ralph Bakshi and the filmmakers of his generation made movies like the original Fire & Ice, even just to evoke a similar style or feeling?

How you're going to do it is very particular. I mean, rotoscoping was the latest technology they had at the time. They couldn't make it look like a painting because they made a cartoon version of it that was more like a comic book. But now we can go further. We can go into that, and we'll be using different techniques.

How easy has it been to translate the depth and substance of that imagery into animated environments? That was obviously the obstacle the first time they made the film.

They would have had to paint every frame, and it was a very low budget movie. And you also just have to know the aesthetic, you have to really know his work, and you also have to know when it's not the right look, color, framing, movement, as if Frank is there himself looking at it with his eyes, going, he wouldn't stand like that! He would have a b.s. meter up pretty high to make sure everything was right.

For Heavy Metal, have you thought of drawing on the work of artists like Richard Corben or Simon Bisley and then animating those for the segments?

To use a really famous artist? It's going to depend on the director because it's going to be different directors. I do some drawing and painting myself, so I know for one of mine, I'm going to design it and the create the look in painting form first and then imitate it. So it's like the reverse of this. I'm going to see how other people want to do it, but that's a great idea.

How important is it that the various stories connect to one another as opposed to standing alone from one another?

I think that what works is the thing that I came up with for Sin City, which was three stories and a wraparound where you don't realize they all are connected but they are ultimately so you do kind of get a complete story. And that was also what happened in Pulp Fiction —so I thought Pulp Fiction, Sin City, Heavy Metal, those all three share some DNA that will make them work storywise so they're bold, but they're not so bold or esoteric that people don't get them.