close
INTERVIEW: The veteran action star talks Assassination Games and how to mature gracefully in Hollywood 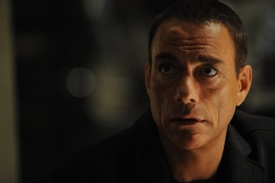 After almost 25 years in Hollywood and countless roles under his belt, Jean-Claude Van Damme remains one of the true icons of modern movies. After starting out in bit parts and supporting turns, he became a leading man with films like Kickboxer and Bloodsport, and it was his films that brought Hong Kong institutions like John Woo, Ringo Lam and Tsui Hark to America. Rescued from a career lull with the meta-textual action movie JCVD, where he played himself, Van Damme has found himself more in-demand than ever, and his latest film, Assassination Games, arrives in theaters this Friday. Boxoffice was lucky enough to speak with Van Damme via email about his new film; in addition to discussing Assassination Games, he talked about his expansive filmography, developing characters far beyond the fight choreography, and about proving to the world that he's more than just "the muscles from Brussels."

How did the critical success of JCVD revive or change your interest in acting, and how did it maybe change the kinds of offers you started getting?

The recognition I received in JCVD gave me the confidence in myself that I had the acting range necessary to do roles beyond action films. I had always felt I could - I feel for example that I have pretty good comedic timing. But it was nice to see that other people agreed with me. As a result of this I have opened myself up to the idea of other genres and participation in other film projects that would not always be perceived as "standard JCVD." I have several really interesting projects on the boards including a couple of comedy/action films.

How well-defined was Brazil in the script in terms of his skills and his appetites (his lifestyle and hobbies) and how much did you bring to him?

The evolution of Brazil was partly script-defined. However, the real character development took place in a great number of discussions between [director] Ernie Barbarash and myself. The cooperation level was fantastic and it allowed me the latitude to really get into the character.

There's a terrific scene where you go out and stop your neighbor from beating the girl he's with. You never seem to get angry or upset, and you are more bothered by the interruption than the fact that he's beating a helpless person. Are those sorts of choices in the script, or how do you make them and bring them to a scene?

I felt that the character had to provide a strong contrast between the physical happenings in the scene and the behavior of the character himself. In this sense it strengths the impact of scene and what is taking place.

How tough or easy is it to play a character who starts out completely cut off from the rest of humanity and then discovers (or rediscovers) that he does care about other people?

You have to get into character and consider who the character is. I took it as a man who was down, but had not always been this way. The humanity was suppressed and needed the right circumstances to re-emerge. This made the "rediscovery" of care for others much easier to portray.

You've had a hugely successful career for more than two decades. Are there any challenges you feel like you've never been offered, or specific things you still want to do?

I face the challenge of continuing to improve the quality of my performances and the range of roles that I take on. I love action films, and my fans expect action films, but I can act! And I really want a chance to show what I can do. I have a calmer approach to films than I once had, I have more perspective on life and career than I once had. I think this is going to give me the ammunition I need to really move ahead with my career.

Do non-action roles appeal to you? If Steven Soderbergh or some other director asked you to play a purely dramatic role is that something you would be interested in?

As I answered earlier I am very interested in trying roles that are outside of my normal type of role.

How has getting older changed your approach to acting, or your thoughts about your career? Do you feel as capable of taking on the sorts of challenges you did when you were starting your career? Or are you even interested in that?

I am in better physical shape today than I was 10 years ago. I am also mindful that I am 50, it is likely that my roles will change over the next 10 years. If I demonstrate my ability to act in other genres as well as in my traditional action roles, I think that my career will continue to develop naturally and adjust with me. Hopefully it will be like a good Bordeaux that continues to get better with age. Look at Clint Eastwood, not a bad example to follow.

When you started acting one of the things that really set you apart from your contemporaries was your willingness to show vulnerability - to allow your characters to get beat up, etc., before they prevail. That has become sort of the prescription for action heroes - having a kind of humanity that all audiences can relate to. How does it feel or have you thought about how your approach sort of foresaw what the industry wanted from its action stars.

Frankly much of what you refer to was story based, and that was the nature of the character I portrayed. In many cases it was a character who first was cast down and then made a triumphant comeback. Chinese action movies often had this element before it became popular in Western films. I wish I could claim I foresaw the trend, but really credit must in many cases go to the writers - although sometimes I was one of them.

Do you have a favorite film, or a project you're proudest to have been involved with? Why?

Well, we already discussed JCVD, and I am certainly pleased with the performance. I very much enjoyed Double Impact, and while it was early in my career, Kickboxer had a certain honesty to the performance that I am still proud of. One of the factors that people don't often consider with actors, that in my case at least has had an effect, is what was actually taking place on the set when a film was made. In certain films they are more memorable to me for the fun I had with some of the other actors. This is not always apparent on film, but there were some great times. Raul Julia was a very, very good actor, and his passing was extremely premature. We were both in Street Fighter, which as you probably noticed did not win any Academy Awards. My part involved filming during a shorter period than Raul's, but we hit it off so well, I actually stuck around to keep him company until his part was done. I had already killed him in the movie, but since scenes are not generally in sequence, there he was up and running again.