'Captain America' Co-Star Sebastian Stan: I Didn't Grow Up With Comic Books. I Grew Up With Communism. 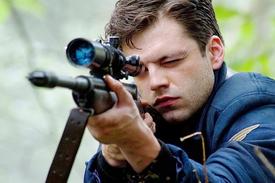 The last time you saw Sebastian Stan, he was probably a creep toying with the hearts of the Gossip Girls or trying to seduce Natalie Portman in Black Swan. But the 27-year-old Romanian-born heartthrob is determined to prove his chops—and his range—to Hollywood. Case in point, his thoughtful answers when Boxoffice asked him big questions about patriotism and the cost of war. Read on to learn more about Bucky, Captain America's childhood chum, and the chance that his character might take on an even bigger role.

Bucky doesn't get a ton of screen time here, but his character is such an important part of the story of Captain America.

Yeah, he is. Obviously, looking back to the comic books and what ends up happening to him, I think their friendship is a big thing. Between him and Steve in the movie, we're able to show something that gets tested in this film with war: what's morally right and is it worth it? I think for Steve, it's just so important for him to contribute something. He doesn't want to be in the shadows. Bucky in this version has always looked out for him and been very overprotective. He's had Steve in his mind in a certain way. He'd never want anything to happen to him—he's the only family he's ever had. At the same time, I think he's kind of ignorant. He sees what happens to Steve. He finally ultimately learns how far Steve's moral code takes him.

Do you think Bucky almost wishes he was the one turned into a super soldier?

No, I don't think so. I think he thinks it's strange. Then again, the circumstances are weird. Bucky gets rescued by this new Steve. For all we know, Bucky is on an operating table thinking he might never come out. That he might never again see the light of day. So for him, every time he comes back from war, he's like, "Here's another chance to think whether it's worth going back. I'm alive. I'm here for one night. I want to live life." I don't think it's jealousy so much, but he doesn't really have much of a choice because I think for him there's an element of, "Okay I'm going to go fight and I will survive this one mission and then I'll come back and I'll not go back." But the problem is that he has no choice because Steve's going and he never lets Steve go by himself. So I think the protective nature of a parent or a brother was was always there. It wasn't like, "Steve's this muscle guy and I want to be him." It's more like, "Oh god—he's grown up and what do I do?"

You didn't move to America until you were 12. Did you grow up with comic book culture?

The funny thing is I didn't grow up with comic books. I grew up with Communism. I was born in Romania and lived there till I was 8 and then I lived in Vienna for a while. Although I was very young, I do remember that we weren't allowed to leave the country. So after the revolution, people wanted to escape and find a new way of life. It's that element of being trapped into something—of a lack of freedom. I always thought for me with Bucky, because of how he grew up in the military and his dad dying in an accident on a military base. His last image of Bucky is, "You're my descendant." I think there is this enormous amount of weight on him to be something when he's never had a chance to go, "What do I really want?" I wanted to bring that—I hope that was being translated.

The '50s comics of Captain America had him fighting Communism. When you read them now, do you feel they're oversimplified or are you just like, "Yes! Fight communism!"

I never read comic books coming from a political opinion, but I understood the overall message, especially with this one, in why it was created. I think it was incredible to get young people excited about something in a different way. Reaching out to an audience like that through a comic book that talks about a war that's going on. I never thought communism was something that was right—or that worked. That being said, I guess I support a comic book that was like, "Freedom!" For me, I've been really educating myself for the last couple of years. When I first came here it was very simple for me. I had an accent. I simply wanted to be just one of the other kids. I didn't want to be different. For a long time, all I lived and wanted and breathed was America. I didn't embrace where I was from. But then as I grew older, I realized it was those things that made me different that actually helped me so it's been like a re-learning process.

In Captain America mythology, Bucky dies but then comes back to life. Do you think that might happen to yours?

I hope so. I would love for that to happen. There are a lot of possibilities. I guess I'll let the fans and the audience of the comic book and the movie decide. Whether I will or not—or whether they even think it's a good idea.

What do you think the military meant to young men at that age in that time?

A sense of belonging, a sense of acceptance, a sense of establishment, a sense of graduating to be a man. Pride. You wanted to serve something. You wanted to do something for the overall good. Empowerment. There were a lot of ideas of disillusionment about it, like, "Oh boy, I grew up with toy guns!" I think that's still happening now. They had become more aware about that during World War I, but it was World War II that really educated a lot of people. I think they went over there and they came back and they thought, "I didn't picture this to be this way." That's why I think Band of Brothers was really helpful for me because it was so intimate with people's experiences over there. Those guys who have been in trenches for such a long time, the rookies that came in who hadn't seen one piece of battle. Just these fresh faces next to these battered faces that had seen all these horrors. There was just a different way they carried themselves. I thought that has to be the difference between Bucky and Steve—at first at least.

There's that moment in the movie where I was almost expecting Bucky to not follow Steve-to say that he's a guy who always goes too far.

Yeah, I think there's an element of being a little pissed off. I just escaped a god damn chamber where a guy is torturing me with things and now I've got to go back because you want to go back? Because you've got a fancy costume on now? That's great, but I think there's also a natural element of: I'm lucky to survive these battles and suddenly you come in and you save an entire platoon of people. And now you come in and you're being hailed as The Guy. You take all this credit for it. But Bucky's like, "It's you and I care about you—of course I love you." But again it forces Bucky to think, "What's it all worth? What am I fighting for?"

There's that powerful scene where Captain America performs for the troops and flops.

Exactly. It really shows where it starts. I thought that was so well done.

How did you handle being at the beginning so much bigger than the fake Steve body, but then letting him be bigger than you in the second half?

It was tough interacting sometimes because sometimes they would put me on a platform, and other times I would have to look at his chest. Then we'd have to match it and freeze in a certain way and then a double would come in and carry on the scene. Technically, there were a couple of things I could do and I couldn't do.

What couldn't you do?

I couldn't act naturally. I couldn't actually hit him or tap him every once in a while. If you were to do physical contact, it would require a specific angle. But Chris was always pretty much the good size that he was. In our real world, our dynamic was much more like the second half of it.

I felt sorry for the guy who played his body double when Steve was thin. On set, did he have a sense of humor about playing the scrawny weakling everyone rejects?

He's a little guy but just an awesome, awesome, super well informed guy. Always with a different interesting book on set. Very eloquent. Very cool character. I think he had a lot of fun. His name was Leander. I give him a lot of credit because he wasn't just sitting around on set. He was watching every single movement that Chris was doing because he had to match him almost to the point of blinking. So he was always constantly working and he was always watching. He contributed his body, but I'm sure it was tough for him sometimes because it requires really pain-breaking attention to be able to match every little thing. He did a really good job. I think he made it easy for the tech guys.

So you think he'll take his friends to see it and say, "That's my body up there!"

He's absolutely going to say that.

What kind of roles are picking for yourself?

Honestly, the truth is I've been trying to do something different each time. Sometimes it's easy to find that, other times it's not. I really want to work on the film version of A View From a Bridge [by Arthur Miller] which has been slated for next year. That would be a completely different character, which would be really awesome. I think the idea is to try to learn and grow different parts of yourself. Liev Schreiber once told me that emotions are like muscles. If you keep using one over and over again, then it's going to grow bigger than the other ones. In that respect, though I always think it's interesting to play conflicted, dark characters I have to find some more lighthearted things to do. It all depends. You always read something and you instinctively respond to it or you don't—and if you don't it's okay. Even though as a young actor, you can take that personally and think, "I can play everything."