Jayma Mays: What The Smurfs Have In Common With 'Glee' 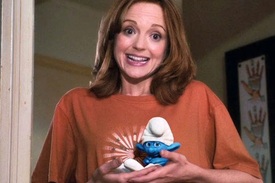 With her big eyes and broad grin, Jayma Mays could pass for a cartoon heroine. But here, the Glee guidance counselor acts alongside them as half of a NYC couple who finds their home invaded by blue pests. Mays tells Boxoffice her plan for getting Gleeks into the theater on The Smurfs' opening weekend.

The Smurfs is very different from Glee.

Yes. It's definitely very different from Glee, except for the fa-la-la-la song. [laughs] I grew up with The Smurfs in the household. Every Saturday morning, by force, my mother would make me watch them. I knew The Smurfs growing up so I was actually very excited when I learned they were going to be making a Smurfs film. I immediately thought "fun!" When I auditioned for the role, they told me immediately I would be auditioning for the role of Neil Patrick Harris' wife so that sent a little "Ting!" in my head. I've been a big fan of his forever. I feel like he can do everything really, really well. He's so multi-talented. He is clearly such a comedic genius and that is what drew me to the film right away. I'm very humbled that they cast me.

With your mother being one of the millions of huge fans of The Smurfs, did that pop culture phenomenon add pressure?

Definitely once I was cast and it came out that I was going to be in it. They would come up and tell me, "I was such a big Smurfs fan growing up. I have 500 figurines!" I started getting really nervous. I didn't realize how big it really is. Also, I found that it wasn't just American-I had no idea about it's European background and how big it was overseas.

So you didn't know anything about Peyo, its Belgian creator, or the history behind The Smurfs?

I really didn't. I didn't know about any of that stuff. I'm not sure Neil did either. It was just like every other Saturday morning cartoon. That was how I knew them. I was blown away that there were books. Our producer [Jordan Kerner] knows so much about them-this is like his passion project. He's been working on this for a decade trying to get this made and made in the right way.

Many interpret the film as strictly a children's movie. How do you think your role can bring in the older audience?

Jordan was saying that he found that target audience was really receptive to Neil and I and our relationship in the film. Neil and I really tried to make sure that our roles were interesting and that we were a believable couple. I really wanted to seem like a modern couple. We wanted to be really natural and normal and have fun together. I feel like that came through. We improvised a little. Neil called me the night before we had our first scene together and he said, "I really want to punch this up and I thought they would be this cool 1940's bantering couple." We would work on things to make sure that it would seem as normal and natural as possible and that there was a real love and admiration for each other there.

I feel like we had fun every day. You have tons of downtime when you're working. He was always playing games on his iPhone like Angry Birds and would make sure that I could play, too. We hung out a lot. We had a lot of fun on Cinco De Mayo together-we went out that night night with my husband and his partner, David. I'm little smitten with him.

You also have to work a lot with a dog.

There are so many firsts for me in this film. I hadn't done anything CGI and I hadn't done any work with animals really before, either. I think it was probably harder for Raja [Gosnell], our director, and the crew. They were desperately trying to get him to do things, but when he wouldn't do what they were asking, I think I found that funnier. They would try to get him to bark and he was so docile he would only do a half of a bark. He was adorable and I'm a big animal fan. I can't imagine ever getting frustrated with an animal. They're more talented than I am.

Did you guys work at all with green screens?

I think Hank did, but we actually shot on a real set, in a real apartment set. That probably helped. You felt like you were in an actual, normal setting.

How did you shoot the kitchen scene without it when all your appliances were moving around?

In the kitchen, it was actually a little poltergeist-y because there were strings attached to everything. There were guys pulling strings to move the bowl across the table and to get the blender to start and the doors to open. They used that clear filament stuff and there were guys everywhere just solely there to pull strings. Neil and I would joke that it would seem like we would be more advanced then to have guys pulling strings. But it kind of awakened the fantasy side of your brain.

I actually just met Alan downstairs. I'm such a huge fan of his. No, I didn't. They were casting the voices as we were filming, so a lot of them hadn't been cast yet. They did a very wonderful thing and hired two very wonderful actors and they did all of the voices that we were working with. We had the little earwig in our ear and there were the eye marks. I think they tried to make this as painless as possible, but little things like that were so helpful to me because it is hard.

What made it so hard?

I didn't want it to look like I'm just staring off into space. I think we wanted to make sure it wasn't like we were talking to children. They were actually little creatures. Jordan [Kerner, producer] and Raja [Gosnell, director] were so great at bringing them to life and trying to explain what we were shooting. It was helpful.