BY DESIGN: The blood, sweat and tears of making an anatomically accurate 3D Smurf 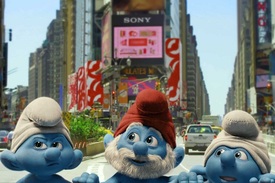 "One should live to Smurf," is the motto of the film and the motto that has ruled the lives of the crew working to revive the decades-old Smurfs in 2011-style 3D. In this modern version, Smurf-obsessed villain Gargamel seeks to capture the Smurfs and obtain their powerful essence in a chase that blunders into a portal into real world Manhattan where they hide out in the apartment of Neil Patrick Harris and Jayma Mays. Sounds simple, but it wasn't easy: from Smurfette's blonde hair to the three-apples-high height of the Smurfs, translating the 2D cartoons into living and breathing creatures in bustling New York City was a challenge.

The Smurfs history goes back to 1958 when a Belgian artist named Pierre "Peyo" Culliford launched them in a comic book. Over the next 50 years, the Smurfs conquered Saturday morning cartoons, movies, videogames, live shows, figurines and even a techno album, 1996's "The Smurfs: Techno is Cool."

Producer Jordan Kerner began his quest to bring the Smurfs to movie theaters 30 years ago when NBC executive Brandon Tartikoff suggested Kerner read The Smurfs book series. Kerner was instantly fascinated and worked diligently for the approval of the Smurfs brand from Peyo's daughter, Veronique. Soon after her yes, Soon after, veteran CGI and live action director Raja Gosnell (Scooby-Doo, Beverly Hills Chihuahua) signed on after chance encounter at a dinner party.

"We needed someone who would understand an honest laugh and an earned tear," says Kerner.

However, the question of how to interpret the Smurfs with modern technology was still left unanswered.

"Much of our consideration had to do with how to make a living, breathing Smurf," says Richard Hoover, visual effects supervisor. "Jordan wanted a Smurf that all the audience would recognize and appreciate, but making that a dimensional character was quite a challenge." The animators created over 570,000 different combinations of Smurfs before settling on the film's six leading Smurfs and 93 other village members.

The visual team hoped to have everything as true to actual-sized as possible. They remained true to the Smurfs' precise three-apple-tall height-nearly 20 million frames were rendered for the film prior to developing a finished product.

The tiniest details, such as Smurfette's hair, were analyzed. In fear of making her blonde locks hair too stiff or too bouncy, approximately 438,000 hairs are on her head. Two animators were hired to work full time to make sure Smurfette's hair was perfect.

"Smurf blue," a legally licensed color, was also tricky. Shades of blue skin were tested and for anatomical precision, were draped over a composited skeleton and muscle mass. When the sun shine, you can see the veins in the Smurf's ears.

Kerner spent a year of testing just on the Smurfs' eyes. "A Smurf's eyes tell the story," he explains. "It's the window to the soul."