'30 Minutes or Less' Co-Star Nick Swardson: The First Autograph I Ever Signed Was For Jesse Eisenberg 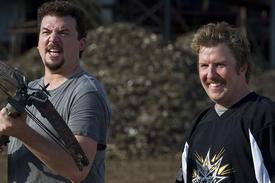 Just try to avoid Nick Swardson. You've got some good reasons: he cusses like a sailor and he loves a good joke about his, ahem, manhood. But the comic is suddenly everywhere on the scene, hosting in his own Comedy Central show Nick Swardson's Pretend Time, starring in next month's Bucky Larson: Born to be a Star, and here in 30 Minutes or Less playing Travis—a goofy, wimpy wannabe badass who solders a bomb on Jesse Eisenberg and forces him to rob a bank. "When I read the script, I was like, 'Awesome,'" says Swardson. "But when I got to set, I was like, 'Okay, this is f--king horrifying.'" Especially when he and Eisenberg have a past that stretches back farther than anyone in Hollywood could imagine—back to when Eisenberg wasn't even barely legal, he was barely in middle school.

In one scene in 30 Minutes or Less, you dance like a monkey. You're very good at it.

I am. I've got a little monkey in me, that's for sure.

Did you practice in a mirror?

No—it was one of those things where I put on the mask and my inner monkey came out of me. It was a surprise. It was very jarring to realize that I still have ape-like qualities.

Meeting Ruben. I've known Ruben for 11 years. I was in the first frame of the first thing Ruben ever directed, a short film for a friend of ours.

Way back before you guys had done anything.

Anything. I think we just met through friends in the scene. Ruben was a huge—and still is—comedy aficianado. He just loves comedy, he loves stand-up, and he would go to all these shows in LA. I would do my shows and he was always there. He's seen me do a million shows.

Being on a set like this, were you giving each other high fives like, "We did it."

There was a really cool moment where we were just like, "I can't believe after all these years we've come to this together full circle." Especially with Jesse—Jesse was a huge fan of my stand-up. Actually, he was the first autograph I signed like 13 years ago.

And his parents were letting him go see your act?

He saw me on Comedy Central, the first stand-up I'd ever done on TV. He was just obsessed with it and he called my manager and I remember signing this autograph for this kid Jesse Eisenberg. It's pretty crazy. And he kept the autograph with him, this signed headshot, and he still has it to this day. He brought it with him to college.

Your roles have a lot of improv. Are you ever surprised by what they choose for the final film?

There's just certain stuff that was so funny and so awesome that I knew it was going in. I mean, there was stuff that I loved that didn't make it, but at the end of the day I really trusted Ruben to make that final call. The DVD is going to be literally f--king nuts. I can't even imagine all the s-t that's going to be on there. It's going to be insane.

I love swearing. I'm glad there's a lot of swearing in the movie.

There is a lot of swearing in the movie. I'm not usually just pro-saying-filthy-s--t, but in the context of these characters, this is how those guys would talk. They were just such simple, small town dudes, we didn't have a problem being completely moronic.

Your character Travis is kind of a pansy. Was it easy to play him?

It was. There's a lot of Travis that is an extension of me, so it wasn't too hard to be him.

The casting really seems to play up people's personas.

The casting was really great. It brought together a different, really eclectic group of people. Comedy-wise, me and Danny [McBride] and Aziz [Ansari] all have very specific styles and tones and cadences. I thought they did a great job of bringing us together—I really like our chemistry.

Did Danny ever boss you around between scenes?

Not too much. Danny's awesome. He's one of the best f--king guys ever. We had never met before the film and we were immediately thrown into being these best friends. But we had no problems getting into it. We're both very similar styles and stuff. He's just a really great guy.

I'm shocked that you and Danny had never met, but you've known Jesse for over a decade.

I know! It was one of those things where we both couldn't believe we'd never met. We travel in the same circles, we have a lot—a lot—of mutual friends. It was bizarre that we had never crossed paths.

You get to use a lot of awesome weapons: flamethrowers, bombs.

It was pretty intense. When I read the script, I was like, "Awesome." But when I got to set, I was like, "Okay, this is f--king horrifying." I was definitely scared. I had to do all this training for the flamethrower. There were all these safety precautions. All of a sudden, people are talking like, "Okay, if this does go wrong, you're going to burst into flames."

What training does a flamethrower take?

The show you how to hold it, basic s--t, and then if something goes wrong, what the hell you do. They're tricky to use.

It's like that scene where you first kidnap Jesse Eisenberg and you're explaining the bomb to him. Up until then, the movie's a total comedy. But in that scene, he's freaking out so hysterically that you see the gulf between jokes and how serious it is for him that he might explode.

Your TV show, Nick Swardson's Pretend Time, launched last year, and after this, you've got Bucky Larson: Born to Be a Star—your first official starring movie role. What do you tell young comedians when they ask you how they can get your career?

Honestly, I always stay true to myself and my comedy and my style and what I like. I always treated people with respect. Growing up in Minnesota, I never had an attitude—I never was disrespectful to people. I was a really easy person to get along with. It's good to be a good person in general, but I think it's really paid off. It's still a small town, a small community. And working hard. Even when I wasn't working, I was always writing and creating and developing ideas. Just really opening up my creative side.

Comedians have a long road to success. But it feels like that road has changed with YouTube and Funny or Die. Online videos are this new path to fame.

Comedy has changed with the Internet. YouTube and Funny or Die and all these places have given everybody this voice to create. Which I think is good and bad. There's so many more people out there now. But at the end of the day, I think you really need to establish a comedic voice. I just hope that people are able to develop that. You can't just make a YouTube video and all of a sudden you're a movie star. You have to hone your craft and get out there. I'm glad that I was able to do stand-up comedy before that YouTube era. I was able to go out and grind it on the road. Bust my ass and travel and get life experience, and I think it was really important.

Being pre-YouTube strengthened you.

Yeah. It didn't come easy even though some people are probably just figuring out who I am with these starring roles. I'm not an overnight success. I've been working at this for 16 years.

Were there any moments when you thought you might quit?

There are some, um, alterations and prosthetics. But for the most part, I spent a lot of time naked.

I can't imagine what it would feel like to see yourself fully nude and larger than life.

I've seen it at test screenings and it's f--king crazy. The funny thing is most people would get a trainer and work out before the movie. But I couldn't because my character wasn't supposed to be super attractive. I had to keep a schlubby body.

Do you think it's going to get you any dates?

I think so. I play a guy with a really small penis—like, tiny. So I think it's only uphill from there when I go on dates.

How are you going to celebrate the weekend that 30 Minutes or Less comes out?

I don't know! I'm in the middle of filming my TV show now, too, so I won't be able to go f--king nuts for a while. Which is good. Maybe me and Danny will go out and get a nice meal.

And reminisce about the year that you've known each other.

We can have our 12 month anniversary.

Do you think you'll be best friends forever?

We will. We're already talking about other projects and s--t like that.

And getting matching BFF necklaces.