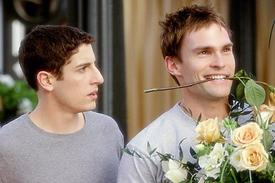 This week, Boxoffice sat down with producer Craig Perry to talk about Final Destination 5, the latest installment in the blockbuster horror series about twentysomethings trying in vain to escape death's design. During our exclusive chat, Perry offered a detailed update on another forthcoming sequel, the American Pie reboot American Reunion. "That went great," Perry said. "It was an incredible amount of fun. It was just great to see those guys back together again."

After launching his career as a producer on the first American Pie and Final Destination films, Perry shepherded both series through all of their various installments, both in theaters and on home video. Looking back on the Pie franchise, he observed that the key to its success was giving some substance to a genre that usually focuses on grossing audiences out. "As much as I love raunch movies, I don't want to say they've played themselves out, but very few of them have that other side to it, which is specific, likeable characters played by actors who just know those characters so intimately and deliver so much on the day and bring so much to every scene. Here, there's an inherent want to see what happened to [them] and where are they now."

Silly as it might sound, Perry admitted that it was an emotional experience recreating the sets and scenarios that launched American Pie more than ten years ago. "Just seeing Jim walk into his bedroom, and it's been changed a little bit because now there's a queen-sized bed because he's a dad and they've got their kid and Michelle's going to be staying with them, but to see that wallpaper, and to see him sit on the bed when his dad comes in, everybody on set was like, ‘yeah!' And then to see those two guys interact, it was like watching thoroughbred horses prance around a manicured field—it's great. It's great to see."

Check out some of Perry's other revelations about the upcoming film, which features almost every single actor from the original American Pie, and which he hopes will return the series to the heights it once enjoyed and raze expectations that American Reunion isn't "just a direct to video movie that somehow found its way onto the big screen."

By the time American Wedding came out, most of the actors were eager to move on to other projects or distance themselves from the franchise. Was there a real eagerness for everyone to go back and revisit these characters, or did they need to rediscover the fun of working with these actors and playing these characters?

All of the actors obviously over time and with enough distance have really fond memories of the experience of making those movies, and when it became obvious that the rite of passage that made sense to justify a reunion was literally a high school reunion, the conversation was a lot easier because you weren't forcing it—it made sense. Now, one of the challenges with any movie but specifically with that movie is that there are so many characters that we have to juggle their storylines and have them come together, and Hurwitz and Schlossburg, the writer-directors, did a terrific job sort of balancing those spinning plates. And we had real cheerleaders in Seann and Jason and then as the more actors came on board, and the more people read the script, the more there became this kind of gravity pulling everybody towards it. And I think that getting everybody back, including MILF Guys Number One and Two—I mean, John Cho, that was the first thing that he was in. So by getting everybody back, it does two things: it makes people think that it's worthwhile and it's not just a direct to video movie that somehow found its way onto the big screen. And I think it also makes the world feel like it's a real world—like everybody's back. When you go to your high school reunion, you see people you haven't seen in maybe eight, nine, ten years, but that world is immediate for you. So that's exactly why it was imperative that we get everybody back, and I think the script, the tone and the timing made it so that everybody did come back. And they had a great time making the movie; I mean, for a lot of people, it was sort of like we had two actors who were child actors, and they never went to high school, and the prom in the first movie was the only prom they had ever gone to, and this really is their reunion.

It was a nice moment when one of the actresses had shown up, and we were at video village and the boys were over finishing a little [scene], and she kind of intimated that this is sort of very awkward because it was like butterflies coming back, and when one of them came over and gave her a hug she started crying. It was very sweet, because as much as you say that the people maybe wanted to put that behind them, age and distance have made them realize that it's their legacy, and you can either disavow it or embrace it and be happy. And all of them to a one have said, you know what? Why would I be ashamed or bummed out or frustrated to be part of something that has meant a lot to a lot of people? Why not see if we can continue to deliver on what makes people like us, like these characters, and like these movies? And it really did fuel the entire process, and it was one probably not like anybody expected. I'm sure everybody's thinking it was hell on earth, cats and dogs fighting, but not at all. It was kind of amazing.

Was there ever a discussion about bringing anyone from the other films back, like say January Jones, who played Stifler's love interest in American Wedding?

We did not bring her back because we were really sort of focusing on the original movie, and why would she go to a high school reunion. And once we sort of had the gateway of that narrative conceit, there was no reason to bring back January. And it's hard with any of these movies to sort of continue to exploit something that happened, you know, 14 years ago, but the reunion was the perfect backdrop to where were we then and where are we now. Who were we with then, and who are we with now. There was a lot of effective exploration since we've grown up with this thing, and if there's enough people who the first movie was sort of a touchstone for, and for kids who are going through it—you're a kid and you're about to graduate from high school, and the first thing you think of is, Jesus, by my ten year reunion, what's life going to be like? So I think that we effectively broadened the audience in a way that allows for the growth of the people who liked the first one, and yet still has a door open for kids who are 17, 18 and 19 years old to find something that has meaning for them directly, which is like anything a challenge. We made the effort to have a broad range of different people with different perspectives and I think it actually helps, because there's more interesting dramatic potential, because each person has an ambition, a goal they want to try to do. And even if it's small, it's something that distinguishes them from the herd of other people, whereas if this was a high school movie, we'd have to rely on clichés.

By the third film, the focus shifted to Stifler, I think to an extent to the detriment of the films. How much does Reunion restore the ensemble feeling of the first film?

We, even Seann, everybody was like, this is an ensemble, and it needs to be an ensemble. Every character needs to have their moment if you will, like every good ensemble has, but part of the strategy was to watch these guys work together as a group to do certain set pieces and shenanigans. It's the group dynamic and how these guys interact with each other that's part of where the humor comes from. And Seann is probably the biggest proponent of saying, you know what? We need to make this an American Pie movie, not a Stifler movie. And another thing we did in this on was give a little bit of vulnerability to Stifler, because I think in the first movie he was a weekly player; he barely had a role. He was the de facto antagonist, but he felt like a guy you knew. But it felt less so and more caricature as the series went on, and we've made a great effort to continue to have Stifler be a human being; he can still be Stifler, but he has to have something that is identifiably human, just a little bit. Seann was absolutely ready to do it, and looking forward to going to that place. And it's been fantastic to watch, because every single thing he does is funny, but now it's not shtick, because now you remember who this guy is. And sometimes when he says things, it's coming from a place of insecurity, it's coming from frustration, and it just makes everything funnier, weirdly. I think that's why the third one for you may not have been funny, because "I don't know that guy! That guy's crazy—he's just a sociopath." Now he's sort of back to being a guy you might know and it's the sort of jackass who's fun to hang out with a few times, but any more than that and it's like, I'm going to go to jail—this guy's crazy! So your points were well observed and well-taken as we approached this one in terms of tone, characterization, and making it just a little bit more credible within the constraints of what an American Pie movie can get away with. And we can get away with a lot.

The first three films share a similar structure. Did you feel obligated to structure Reunion the same way?

I think the great thing about any franchise is there's expectation going in, and the challenge and the pleasure comes from acknowledging those expectations and sublimating them. So if you have an opening set piece like we had in American Pie and now American Reunion, to have it very quickly in a shorthand, and with visuals establishing exactly where the characters are now, eight years later in a way that calls back to the first movie but also you get a laugh out of the fact that, oh geez, look where they are, then you're using the paradigm in the best possible way, as a way to comment on the past and to set the stage for the future. I think that's the shrewd thing that Hurwitz and Schlossburg did with that script, is that they said, okay, there's a structure here that we don't have to adhere to, but if we adhere to it, how do we turn it on its head? How do we capitalize on what it offers us for a shorthand, especially when you have so many major characters that you have to be juggling. Let's get into it fast and sort of set the stage. I think people are going to be highly amused at the opening sequence and sort of the callbacks that it makes and the things that it says about where the characters are right now.