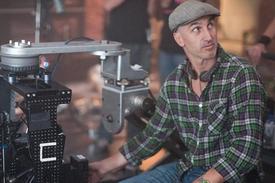 For the guy who previously made the Ryan Gosling drama Lars and the Real Girl, directing Fright Night is an unexpected choice. There's a big difference between a dysfunctional love doll romance and a vampire horror comedy. And yet the indie darling Craig Gillespie makes a smooth transition into mainstream moviemaking with his remake of the '80s flick, which stars Anton Yelchin, Imogen Poots, Colin Farrell, and Christopher Mintz-Plasse. Boxoffice sat down with Gillespie at this year's San Diego Comic-Con, where the filmmaker opened up about about the opportunity—and responsibility—of rebooting a beloved camp classic, and on his even odder next project, the Victorian-era monster movie Pride and Prejudice and Zombies.

How did you pay homage to the original but also make sure it wasn't a carbon copy?

I wasn't that familiar with the original. When the script got sent to me, I wasn't even looking to do a vampire film. I was looking at a couple of projects I wanted to develop and then I happened to be having a general meeting at DreamWorks and they sent this script over. So I picked it up a little reluctantly—it wasn't where my head was—but I read it and Marti Noxon wrote it, who worked on Buffy the Vampire Slayer and just recently did I Am Number Four, and I thought, "This is just too good." The movie was right there on the page. What was great about it for me is it's really scary and has a lot of thriller aspects to it, but it was funny—I loved that combination. The remake aspect didn't factor into it. There are certain story points that are true to the original, but fundamentally the vampire is completely different.

At that point, did you look at the original at all for guidance?

No. I think I watched the original about two weeks before we started filming, but through all the prep I actually wanted to keep my vision on the script. I didn't want to get too contaminated by the original. And then I went back and looked at it trying to weave in certain things to pay homage to.

The film uses 3D very specifically to mess with the audience, which I feel really distinguishes it since many filmmakers are trying to make 3D immersive and unnoticeable.

It's a fine line, and I'm a part of that audience who hates it when it feels contrived. So it was a constant debate on where to have those moments and how to not take you out of the story with it. I love the immersive quality, so for me this is kind of interesting because we've all seen these fantastical worlds in 3D, but to see two guys talk in a kitchen in 3D is just an interesting challenge to see how that works. You get this sense that you kind of want to just look around their shoulder—you feel that with the 3D. But then on top of that I was trying to figure how to make things make you feel like you're in it, explosions and embers and things that float out into the audience. That was the interesting part. When we were shooting, I would constantly look for that opportunity.

There's not a lot of mystery that Colin Farrell is a vampire. For you, what value is there in frontloading that revelation?

That's a good question, and that is actually different from the original. That one has that mystery to it. Basically I took my inspiration from other films, No Country [For Old Men] being one of them. Not to compare us in any way to No Country, but the opening is a such a violent scene, and what I love about that is after that, it keeps you on edge. Something that can be as mundane as two people talking in a doorway suddenly is very threatening. I liked that approach. That's really what I wanted to frontload. We've got this incredibly vicious scene up front because the audience knows he's already a vampire. So I thought it would be more interesting and the audience would be more on edge, because this way you just don't know what's going to happen.

What direction did you give Colin to make sure this guy is menacing, dangerous, seductive, but he's not too much of a cartoon?

It was interesting because I had a very pure idea of what this vampire was. Basically he was almost like a sexual predator or serial killer in the sense that they're incredibly charming, but completely emotionally detached. That was my perspective on what this vampire would be after 400 years of just chasing down human blood. And we've seen that romantic side of vampires before, so I really wanted to just look at him as a predator. So we began with the first scene, which was the pool scene, and Colin is so generous as an actor—he gave me so much range. Then we narrowed it down to this very grounded, nuanced performance. So taking the vampire equation out of it, it's just that alpha male situation where he can say something in a very casual way that's extremely threatening and have fun with it. He has this this baggage of being around for 400 years so there is a boredom and lack of fear and mundaneness that makes him a little odd.

In contemporary horror, even the characters know horror conventions and cliches inside and out. How do you do that without contradicting yourself?

What's great about Marti's script is that she sort of acknowledges it when Christopher Mintz-Plasse says, "This is not Twilight." I think that's sort of great because it's not what people expect. But then if you just use these performances, they are genuinely fearful of what's going on and that puts people back in the film. You're sort of walking that line where you're acknowledging it but you're also seeing the performance they're giving—you can't help but feel their emotion.

Okay, in this movie, a house blows up and there's a car crash down the street. Wouldn't there be some authorities showing up?

It's funny because with this genre of film, a lot of times if you don't address it, it doesn't come up. Any kind of action sequence when you see a car crash, it's always, "Where are the authorities?" I tried to address it just enough by having the police at the hospital because I wanted to have that police presence—I wanted to show that he went down that avenue. But when we had screenings, that never came up for the audience, so we had more but we actually shortened those scenes.

This film offers you a great commercial opportunity, but are genre films something that appeals to you in particular?

It was a great opportunity for me because it was such a different film from Lars and the Real Girl. This one has so much action and thriller in it, and to use the camera as another character is a lot of fun. 3D is just a whole other muscle. I'm actually working on developing Pride and Prejudice and Zombies right now. I was not looking to be in this genre, but the script got sent to me and it was a great script. What I'm always attracted to is the balance of two genres. For some people, that would be a tricky tightrope, but I get excited about making that work. It's not the genre—it's just finding a script I can put my stamp on.

How far along are you on that project?

We've done the rewrite—Marti did the rewrite—which is just a little quick polish of certain characters and things that I wanted to add my touch to. And we're out to actors right now.

It seems like you could play it all goofy, or you could go straight-laced Jane Eyre where a zombie wanders into the frame.

We're actually going more that way. It's like Joe Wright's Pride and Prejudice, which he did a beautiful adaptation of—it has a lot of humor and everything that is Jane Austen is about that banter and that wit. It's entertaining and it's a classic love story, so that is really what I'm focused on—to make sure that relationship works like they do with Jane Austen. And then they live in this time where there is a zombie plague of 50 years, so that's just something they have to live with and there's a lot of humor in that. There are some really scary scenes, but the banter, humor, and chemistry between Darcy and Liz is really important.

Do you see any sorts of themes emerging from your films?

I do. I am attracted to things with a certain sort of sensibility—a little more complex in terms of the tone. I love when you have people in the audience that are scared and people that are laughing at the same time. The audience has their own take, they bring their own perspective. So I'm always trying to find that dance where the audience brings their own baggage to it.