close
INTERVIEW: The Clay Pigeons director explains how to ground a movie where characters switch bodies 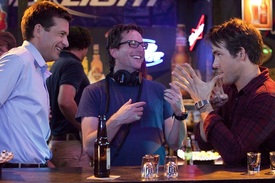 A little more than ten years ago, David Dobkin made the unconventional comedy Clay Pigeons, in which small town Texan Joaquin Phoenix squares off against Vince Vaughn's charismatic serial killer. That odd debut presaged a career of unconventional comedies. Dobkin would go on to direct Shanghai Knights, Wedding Crashers and his latest, The Change-Up, in which exasperated husband Jason Bateman switches bodies with his free-spirited buddy Ryan Reynolds. It sounds like an '80s trope—and it is—but Dobkin puts his own surprising spin on the material and here talks to Boxoffice about picking projects that keep him connected to the indie sensibility that earned him a place in Hollywood. Oh, and CGI boobs.

When Wedding Crashers came out it heralded the return of the R-rated comedy. Do you see a definable aesthetic emerging from your work, even in retrospect?

I think it's two-part. There's the stylistic sensibility of the comedy itself: I'm always going to want to be interested in pushing boundaries and trying things that are just unusual and different. I don't go out there to make the same movie twice or make a movie that I've seen before. I don't think I get attracted to material in that way. I didn't intend to make a body-switching movie—it was certainly not on my list of to-dos. But the script was so f--king good and so funny, and it was so real and grounded that I just had to make it. So comedically, I think there's always going to be that sensibility-I love Lenny Bruce, I love Richard Pryor, 48 Hours was a seminal movie for me—and the scene where Eddie Murphy walks into the honkytonk bar set the tone for what I shoot for comedically all of the time. I'll never reach that moment, but that was one of the most exciting moments I'd ever seen.

Then, Wedding Crashers was a very personal story because as a young kid I had experiences of being tight with my guy friends and then someone falls in love with a girl and you're like, "Wait—now I don't see you as much." The emotional arc of the characters had a story that I could relate to. It was very specific but worth telling, the "bromance" thing as it got coined later on. And then this movie: I'm married with two kids and I hate this movie being thought of as a fairy tale or a fable, because it's not-that makes it sound softer than it is. But Wedding Crashers was as emotional as you could tell that story, and this story had an opportunity to go to a more emotional place in a kind of cool way for a movie like this. I think that what Judd [Apatow] does is my favorite stuff out there, and all of his characters are grounded and there's emotion in it. I think we're big James Brooks fans, so it all harkens from that kind of filmmaking. They switch bodies, so there's a certain part of it that's irreverent and not realistic, but I wanted it to be real. I feel like the comedy had a license to go to pretty absurdist places when it wanted to because they pissed in a fountain.

How well-defined was the machinery of the body-switching conceit? Particularly when you're trying to keep it grounded in a semblance of reality.

They need reality. That's the obstacle. Part of the movie is about the obstacles they run into in a realistic way in each other's lives. It's literal in that sense; it takes it as seriously as Tootsie would have—which is not a body-switching movie, but it kind of is. It was so specific about "Here's Jason's world, and here's Ryan's world. They're going to end up in each other's lives." And then the great thing they did was they shorthand the front of the movie—I mean, they switch bodies 15 minutes into the movie, which is really fast—and the rest of it is the discovery of each other's lives. So you're learning about both characters at the same time, which I've got to hand it to the writers, is really a brilliant thing. It's like, "Oh, I'm going to discover what's going on in his marriage while I'm in someone else's body. I'm going to discover what's going on in his life—and I'm going to discover what this guy whose life looks so amazing to me and I wish I could be a part of, is not as amazing in the sadness and the troubles of what he's involved in." It is what would happen if you switched bodies with a friend of yours—you would learn things about them that you never imagined. And this movie's not afraid to go those really weird and intimate places.

Was the nudity in the film actually CGI?

There were things that were finessed—or you clean things up on people these days, you know what I mean?

Did technology enable you to push the raunchiness further? Leslie Mann isn't an actress who has seemed comfortable with nudity in the past.

She wanted to do it. Honestly, I would never have asked her to do it, mostly because I've been friends with Judd for a long time. [Laughs] I don't know what her boundaries are—I know she's going to sit on the can and take a dump, because that's written in the script, but it never said anything about nudity. And she called me up and was like, "I think while I'm breastfeeding, it should be real-like my tits are hanging out." And I was like, "Uh, okay." I thought that does make it more poignant—it makes it more real. We're not going to be gratuitous about it, but it's there. And when he's having his moment of believing she's this fantasy girl, we present it like it's a lad mag or an old ‘80s music video, like a Whitesnake video or something, and it's just funny. But everybody went for it and that's one of the fun things about the movie: whether it's to everyone's taste or not, clearly everybody's going for it and having a good time. And at the same time, they're not trying too hard. Like, "Here's the material, it made us all laugh when we read it, so let's just throw it all out there and see how far we can take it."

How tough was it to find the right balance between the broad comedy set pieces and the real melodrama? Leslie, in particular, has to do a lot of dramatic heavy lifting.

Again, they existed side by side in the script, so we felt like they could exist side by side in the film. Tone is created by what you present, and I think you have to be confident when you present things because that's how tone comes together eventually. But if she wasn't grounded in the movie, the ending would be really cheesy and corny, and the only way to avoid that in a movie which has such a PG concept is to actually go in both directions where you wouldn't go with a PG film. You would never have that scene with Mann's character breaking down about her marriage in a PG movie, not to that extent, that raw and that long. But that's part of the signal of going, "Hey, you are in an adult film, and we are going to treat you like adults, and we're going to act like adults when we make it, no matter how silly it is." So I think it's important to do that, and again, the third act of the movie hangs on a bunch of emotional decisions and emotional epiphanies, and you can't just spring that s--t out of nowhere on people. You have to tell people that you're going there. And she grounds the film and allows the guys to go farther-that's the whole thing. Because she's holding down the middle.

One Ryan and Jason switch bodies, how did you coach them to adopt each other's behavioral tics? Particularly because we have to see the other one's personality in there somewhere.

We watched it very carefully because there's the inside truth of playing a character, and the outside expression of it. They both have to be accurate, and the inside is sometimes ironically enough easier to get to. A guy like Ryan's Mitch, who's the cool guy and a little bit of a dumb-dumb, he's consistent in how he approaches things. So that consistency exists from the inside-out as long as both actors tap into the same colors. If I'm going to cry or you're going to cry, you're going to see either of us cry from the inside. But the outside stuff is much harder—and honestly, we studied it a little, but not a lot. We did it enough that we felt like we had done due diligence to discuss it. We didn't do it so much that we had scenes where they were trying to imitate one another. We didn't want this to be imitation, I wanted them to go, "Okay Ryan, you're playing Mitch now and Dave is now Jason," and we knew who Dave was and we knew who Mitch was. We worked those two things out and then the actors just took off and did it, and I gave it a little bit of a tune-up. But their fastballs were the same fastballs. We were like, "Okay, this is where the bulls-eye is with this guy, and this is what he's thinking when he goes into a scene. He is not worried about what the little girl thinks, he's worried about his sense of this, that, or the other." But some scenes had to be removed from the movie because they wavered on the edge and they muddied the lines.

I'm sad about that. That was still part of the wave of Sex, Lies, and Videotape, when someone could come in with a script and direct for the first time and f--king have a hit. I don't feel like that's going around enough now—or it's certainly not getting that platform. Or maybe that platform is now cable TV—it's hard to say what's the best place for it. But it's not that way, you're right, and I jones for it. I tend to credit myself as a filmmaker who can work on any budget level. I've never lost my low-budget chops, and often use them to get these Hollywood movies done. But I definitely intend to go back—I can tell you that for sure. I miss it, I miss the creative freedom, but a movie like that could never be made at a studio, it just can't be. And it's still alive, but you marvel when you see these movies that come out of nowhere, whether it's Y Tu Mama Tambien or whatever it is, and you're like, "Man, that is a f--king movie movie!" And that's got to keep happening, and it will, but I have a nostalgia for that time in my career and I can't wait to get back to it. I don't know when that would be—I have this King Arthur movie I'm going to go do next—but before that I was circling two incredibly low-budget, no-pay, go-make-it-for-the-love-of-making-it movies. I was incredibly close, so I guess I gotta somehow turn myself away from Hollywood. [Laughs]