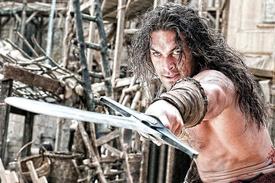 As the director of two remakes of iconic horror films, The Texas Chainsaw Massacre and Friday the 13th, director Marcus Nispel is no stranger to fighting an uphill battle against expectations. But for Conan the Barbarian, his new interpretation of the Robert E. Howard comic book character, the German filmmaker had considerable back-up in Fredrik Malmberg, a producer who spent many, many years shepherding the Cimmerian barbarian through video games, motion comics, and now, his third feature film. Boxoffice sat down with Nispel and Malmberg to talk about the challenges of reviving the iconic action hero and reflect on Conan's position as the personification of machismo in an era of wimpy sensitivity and emotion and ... food allergies?

How important to you is it that Conan is totally macho?

Fredrik Malmberg: I think he is a man's man, and I think the first act of the movie really shows what it takes to survive. I don't think that Conan cares if you're a woman or a man—he looks beyond that. It's all about your moral fiber. Because if you grow up in a barbaric society like he does, you have to be very careful about the consequences of your actions. If you say the wrong thing, you might get your head chopped off. And that's what's so pleasant about this character. Marcus always says he's politically incorrect—and he is in today's society—but back then that's what it took to survive. He's an existentialist.

Marcus Nispel: We made sure to make the rift even bigger by squaring him off against a nun. That's as much of a contrast as possible—how could they possibly see eye to eye? I always loved The African Queen, and I felt like that was a good thing to throw in there, a woman that's actually very strong on her own, but from a completely different planet.

Is this still a generation that buys into machismo, or have they been castrated by a politically-correct corporate age?

Malmberg: It's barbarism versus civilization.

With both the comic book source material and the two prior films to draw upon, what responsibility—and what opportunity—did you feel like you had with your version of Conan?

Nispel: I'm just a tourist here. Fred is the gatekeeper, the crypt keeper, so Conan never went on hiatus. There were video games, there were comic books, and he ushered Conan as a character through all of this. I'd seen Frazetta paintings when I was a kid and it made me want to go to art school. I saw a movie that made me want to shoot film. But ever since, I've done a bunch of commercials and movies, and now I'm coming back. But Fred was there for the time in between. But in that time, who Conan is changed—it changed in our perception and our subconsciousness. And so it was never an attempt to tap into one of those incarnations, but an amalgamation, and I think that's a very fascinating process.

Malmberg: I can concur. I loved the Arnold movie—I think we all did—and that was an uncompromising movie, too. It was a slap in your face, because it was violent. There was Arnold, this big walking special effect that you had never seen before—it was just amazing. But it wasn't necessarily as Robert E. Howard wrote it. But I think without that movie, we would not have had that resurgence, or the staying power. Because so many millions of people just went to read the comics, and they discovered that, "Oh, okay, that was one artist's impression of the Conan mythos." And when we approached it—and I remember when I met Marcus for the first time—I had followed his work too, and he was clearly a very visual filmmaker. And he had done Pathfinder [a 2007 Viking vs. Native Americans movie], and that to me, it wasn't Conan, but it had the Frazetta inspiration, all of the Nordic inspirations that really fascinates us as Europeans. Here, Robert E. Howard has a huge legacy as an American author of adventure fiction, but in Europe, we feel that the Conan world is our world—it's a prehistoric world.

Nispel: It's interesting you bring this up, because I always felt like apologizing for Pathfinder and trying to underplay it in many ways.

Malmberg: I asked you, you remember, I asked you, "What went wrong?" Because you could see it was a fantastic achievement that you didn't have all of the resources for.

Nispel: My answer to it was this: I want to make a movie that's kind of like a Rambo, and kind of like a Conan. It's definitely a graphic novel hero. They said, "You will never get the money for it." And I said, "Why?" They said because there is no Pathfinder graphic novel—there is no Conan logo that you can buy into. So I made my own graphic novel, and a produced a graphic novel and based it on that so that everybody knows they're looking at a graphic novel movie. I wanted to do it different. I want to have a really good actor, and I want to make it realistic, like Apocalypto later did. And so I did all of the right things, but people would look at it, and they would say, "Well, why didn't he die of hypothermia because he was in the cold water for so long? How long can he possibly hold his breath?" And I said, "It's Rambo! It's Conan! It's all of that." They said, "But nobody told us." So I realized that it was a tonal misstep. I didn't want to do Lord of the Rings, I didn't want to do Last of the Mohicans, and yet people would say, "Well, it's not Last of the Mohicans!" I didn't want to do all of these movies. So when I met Fred, I went, "You know what? I can put something in perspective here and I can do it again, under the right star—under the right aspect. I can't make a Conan movie and take Conan out of the equation. I've got to do a movie that tells people how to look at that kind of movie."

Malmberg: But to go back to your question, there was of course a huge legacy with Arnold and Milius' movie, which we all revered—we all think it's a great movie. But that was 30 years ago, and now is now. And I hope that audiences will see this movie coming off of Lord of the Rings, Harry Potter, all very PG-13 movies, and here comes another big slap in the face. Because here comes Marcus Nispel's Conan. And I think it is politically incorrect, and it is a slap in the face.

Nispel: It's funny, because Jason really swears it's true that he never watched the original.

Malmberg: He did recently.

Nispel: He did recently, but he's a younger guy, and so for me it was almost hard to believe. And then for him to get the job, he said, "I don't want this to inform or cloud my own performance," so he stayed away from it. And in a way it's the best thing he could have done, because you're doomed if you do, doomed if you don't. But he says this is the perfect Conan movie. It will split fans in half, because all of the Robert Howard disciples will say he was never a slave, and point out so many inaccuracies. And yet there are all of these people that love that movie very much. But again, these things don't matter if you make your own vision of it—if you go and you look at this amalgamation of it. And if you look at the original books, the guy on the cover looks like Dean Martin. [Laughs] Is that the guy you want to make a movie on? That was that guy's vision of the original books. That's what sucks about religion-that people feel that what was true during a certain time with a certain religion still applies now. Times have changed.

Barbarian movies are not a subgenre that is readily taken seriously. What was important for you to include in order to makes sure it had real gravitas but was also fun?

Malmberg: This is a very good question, and coming not only as the producer of it all but as a fanboy who basically loves this type of film, I could easily spot throughout those years that it has to be realistic. I have to believe it. I have to be immersed in it. And then it's fine. And Conan is not a spandex-clad superhero—it has to be believable.

Nispel: I think barbarian movies never went away, they just came in different disguises, and what they rely on is a character that can pull that off. As I've said, only Sean Connery can play the Bond we love. Not the debonair one, because I like Roger Moore too, and he's debonair and that's all fine. But Connery is the guy that can grab a woman's ass and get away with it.

Nispel: Yeah—but that guy was a barbarian! He shoots first, asks questions later. But what is it that makes a mythos like Conan exist through so many generations, for such a long time? It's that yearning to tap into something that allows us for two hours to be away from the world where for our kids we have to set up a play date. Where he's not allergic so he can't even take a bite. There's a difference, because that's the world they're growing up with. So no wonder they end up doing drugs and drinking themselves crazy! There's all of this stuff pent up that they didn't ever get to exercise.

Malmberg: It's the burden of civilization.