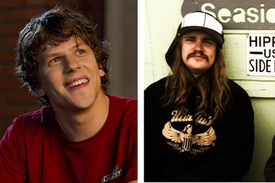 Generally, people who don't work in the pizzeria call us "pizza boy" or "delivery guy" or "pizza guy." In the pizzeria, we're called "drivers," as in, "Who's driving tonight?" But anytime you show up at the house, it's like, "Oh, the pizza dude's here!" "Pizza dude" is probably my favorite.

I could see Jesse Eisenberg being a pizza delivery man for sure, especially the way he was driving. Not that people are pulling e-brakes or anything like that delivering a pizza, but we do drive fast. I've worked in three pizza places and never known of one that still had a time limit to deliver. Driving like he did would be great to do, but it's a little hard to drive like that in a little Dodge Neon compared to a Ford Mustang.

When you get hired, they ask, "Can you drive a car? Do you have a license? Then here you go. Don't drop the food." They didn't ask if I had any speeding tickets or anything. They let me use my own car. One of them wanted to me put one of those signs on my roof that light up. It's a magnet thing that sits on the roof with a cord that comes down and you plug it into a cigarette lighter. But it kept sliding off and it dented my trunk, so I told them I wasn't going to use it. Another place had their own car with decals advertising the place, which worked well because a lot of cops ate at that pizzeria so we had more leeway. I've been pulled over a couple times, but I've never been ticketed while working—even in my own car. Once I was on my cellphone trying to get directions to a house, another time I was speeding. I said the name of the company that I worked for and he said, "Okay, just slow it down."

The only other pizza delivery movie I've seen besides 30 Minutes or Less is Loverboy, which deals more directly with pizza delivery. But I've never had an "extra anchovy" delivery. The pizzerias I've worked at haven't even had anchovies, so we've never had the opportunity. I've delivered to attractive women, but nothing ever happens the way it does in the movies. There's never some horny old lady looking to get laid. It's usually just a bunch of old fat guys. When I was 16 and I just started, I thought that might happen. But then after the first few days on the job, I learned it's mostly just your typical families.

If you want to get a tip, you better be friendly. You don't really need to be a people person. You could just show up and say "Here's how much it cost," and then leave. But where's the fun in that. I like talking to people. It makes it more enjoyable to have a conversation with somebody and then leave.

There's one elderly lady who calls all the time and she's had other drivers put away her groceries for her or hang curtains for her. Old people, they don't really have anybody around and when that one person shows up, they try to talk to them. Older people will talk your ear off for as long as they can. They're just lonely.

You never know what you're walking into. I guess it's like UPS guys or being a f-king mailman. You hear a ton of jokes over and over again like, "Oh, I forgot to order any chicken wings—have any extras in the car?" That's not even a funny joke. People just say silly things to you all the time. If you go into a business to deliver food, there's always a bunch of people who didn't order anything, but when you walk by they're like, "Oh yeah! Just set it down over there!" I just give them a friendly nod and keep going. You hear that s-t all the time.

I've seen some hoarder-type s-t, though. Houses where they can barely open the door and you just squeeze the pizza through. There was one house in Utica that was actually a fairly nice looking house. But when the lady invited me in, I set one foot in the door and all you could smell was urine. There was animal hair everywhere. But other than that, the place looked good. S-t like that sticks in my head.

There's a lot of different characters who work at a pizza place. Everybody just wants to get through the day and then go out and party with each other afterward. It's like a second group of friends. For the most part, everyone gets along. There's definitely a lot of arguing and s-t, but that's just when it's busy. Everyone's hectic and tempers flare.

I think the biggest misconception about us is we're slackers. I wouldn't consider myself one, either. Most people aren't doing it to make a career out of it, or anything. Sometimes you'll tell people what you do and there's a moment of that thing where you think they're thinking, "You're a slacker, you're an idiot, you're a stoner." I get why Jesse Eisenberg's job is shorthand for being a slacker. But you make money and you don't have to sit in an office—you get to get out and drive around and meet people. And to be honest, I've made a lot of money delivering pizzas. I'll walk out at the end of the night with $60 in tips plus my normal pay, which isn't bad for a couple hours work.

It's the fifth most dangerous job in America? I guess that would depend on the area where you're working. Maybe it's more dangerous than I think. There have been times when I've think about some of the areas I'm in and I realize, "Holy s-t, I've got $400 in my pocket right now." You're walking away from the door and counting the money and you never know who's watching you. But who the f-k's really going to try to rob a pizza boy. I guess I could see it happening, but I've never really felt scared or nervous.

And to actually go rob a bank—I don't think I could pull that off. I have a bit of a rememberable look so I have run into a few people at the bar who have been like, "Hey! You brought me that pizza the other day!" Yup, that was me. I guess I could wear a ski mask. I did like that line in the movie about where you shouldn't wear pantyhose because you can still see the face. When I see people wear pantyhose in movies, I'm like, "I can still see who you are."

If the bomb thing was not involved and the situation was a little bit different—like if they had a family member kidnapped and they needed me to go rob a bank for them—I would probably have an easier time getting it done.

I heard this was based on a true story? And the bomb really went off? Jesus. I mean, that doesn't make me more scared to go out there—I don't know why it wouldn't—but just based off of personal experiences, it seems like a pretty safe job to me. And he was in on the robbery. There's no way in hell I'd do something like that.

I thought it was pretty funny. I thought they blew their wad on the previews—they gave away all the good s-t, you know what I mean. But definitely not the worst movie ever made. I thought the hitman guy and the major kind of sucked. I think the s-t between Nick Swardson and Danny McBride could have been a little better. Just some of the jokes missed for me. Like the voicemail he left on that stripper's phone—I know it was supposed to be funny and I probably laughed a little bit, but it seemed a little drawn out. All in all, I'd recommend the movie to people. I wouldn't tell them it was going to change their lives or anything.

That first chase scene when they're leaving the bank and they play that song, "The Heat is On," I was like, "Seriously, you're playing this song right now?" Who even sings that song? It's some '80s s-t, right? That was way out of place. But that's just one man's opinion. And everyone makes fun of me because I listen to sports talk all day long. I like sports. But the next day, someone will get in the car and be like, "Why is this damn radio always set on AM?!"

There's no way I could quantify how much pizza I've had in my life. More than the average person. Say you work a six hour shift. When you get hungry, you're going to take a break, eat a slice of pizza. If you work five days a week, that's five slices right there. If you work that way for a year, that's a lot of pizza—not to mention the pizza you eat when you're not working. Yeah, I get sick of pizza. But then you just put something else on it.

The most common order is a large plain cheese. We make so many large plains. People with kids just get cheese cause kids are picky eaters. You can't put anything fun on your pizza. If I could only have one type of pizza for the rest of my life, it would be pepperoni.

At the end of the day, you smell like fried food. And I have long hair so it gets in my hair, gets in my clothes. I always have to shower before I see my girlfriend and put fresh clothes on. I even wash my pizza laundry separate from my normal laundry in two loads because I didn't want to cross-contaminate anything. Even after washing them, the t-shirts still have this weird smell. It's not just for the ladies, either. It's for me.

People are usually pretty excited when I arrive. Kids go nuts. I've definitely shown up and gotten some high fives. No hugs, though. I've shook a few people's hands when sometimes you get talking to people for longer than you should. If you get into a good conversation, I'll give them a handshake before I leave.

If people are partying, it's usually a fun delivery. The order will be $40 and they'll give you $60 and say keep it. And if I say, "You're really tipping me $20?" they'll say, "Yeah! F-k it! Let's party!" Drunk people will tip you so much money. They'll try to get you stoned or they'll try to get you drunk. I've never drank a beer at a house, but I've definitely taken beers for later. People have definitely tipped me with beers. You just throw them in the fridge when you get back and save them for after work. And you don't have to report them on your taxes.