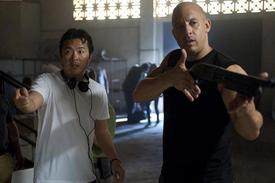 When Fast Five premiered in April, it sped out of the gate and demolished box office records, setting the pace for summer and taking in more than $600 million worldwide to become the most successful film in the series. Before its $86.2 million opening weekend was over, Universal Pictures announced that a sequel was on its way that would further explore the possibilities hinted at in Fast Five's provocative closing-credits Easter egg. During an interview today for the Blu-ray release of Fast Five, director Justin Lin revealed that as he wrapped up production on the last film, he already had fully developed sequences for what's tentatively titled Fast Six. (We were hoping for Fa6t 6ix.) Here's what may be in store for Vin Diesel, Michelle Rodriguez and the gang:

Fast Five has maybe the best Easter egg I've ever seen at the end of a film. How much of the appearance of Eva Mendes and possibly Michelle Rodriguez was predetermined for a next film, and how much was it just a coda to include for fun?

Vin [Diesel] and I were talking about it way back in the fourth one. The thing about Vin is that usually if I go meet him in LA or New York or wherever, I kind of have to block out like six to eight hours every time we sit down, because we end up talking about stuff that's not even about the film—which I love. So it's kind of cool because we had talked about that for a very long time, about how if we were fortunate enough we were going to build this into a trilogy starting with the fourth one. He was going to bring back everybody because ultimately what I love about the franchise is that it's about this construct of this family in a very untraditional sense. So to be able to bring everybody back, that was all pre-planned.

I think the Michelle [Rodriguez] of it all, we'd been talking about that, but our big thing was how to ultimately present that to the audience. And I think that we always knew that the Michelle element was something we had kind of planted the seed for, but I think the presentation of it was something Vin and I had a lot of discussions about. But ultimately, while we were shooting Fast Five, I loved seeing all of these characters come back, and the one character that I really didn't get to see was Eva Mendes' character. And I felt like she was part of the family, and I felt like she was the best person to be able to do it—you know, the audience was going to sit all of the way through to the end, and I thought her and Hobbs [Dwayne "The Rock" Johnson] seemed like a good pair. They were the two characters that were able to bring this news. So that came through more kind of talking and discovering, but I knew I wanted to bring everybody back. But I didn't know how much fun and how exciting it was until we were back on set. But in regards to Letty, that's something that we had always had in our back pocket.

How far are you guys into the process of developing or cracking the story for Fast Six? Have you taken any inspiration from what people seemed to respond to in Fast Five?

To answer the last part of your question, that's something that I tried to avoid for sure. Because if I'm trying to figure out the formula of what people like, I would be chasing something that I don't understand. My whole thing is about respecting the audience and respecting the evolution of these characters—and they've grown and now the family is back together. And in many ways, some of the big pieces of Fast Six have already been discussed: I already have a 12-minute sequence done. I did it just as an exercise. I had it done before we were finished with Fast Five, actually. So I wanted to do that just to have it there and to be honest with you, I didn't know if I was going to do a Fast Six. I didn't know if people were going to embrace Fast Five and we were going to have an opportunity. But I felt like I really wanted to make sure that the last scene, which I had talked to Vin about countless times—I wanted to make sure that was done. So actually I boarded it, I pre-vised it, and I cut it. So it's funny, when we were in Atlanta shooting it, I already had the end sequence to Fast Six done. And that was what I wanted to work towards.

Now I'm talking to Chris [Morgan, the writer of the last three films], we're talking to everybody, and I'm re-engaging, but it's cool because it's not about, "Hey, people want to see another one-what are we going to do?" Now it's like, "wow, people want to see another one-and we have a plan." So it's been a really great. I've just been sitting down with Chris and we're getting together later today, and it's much more fun when you kind of know where you're going to go. That kind of discourse is something I enjoy much more than, "Oh my God—what are we going to do?" So I think in a way, it's a perfect relationship of the audience embracing it and wanting another one-and us being prepared that if that happens, we know where to go.