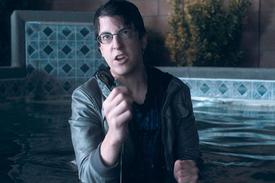 Say this for Christopher Mintz-Plasse: he's got a surprising amount of staying power. The young actor was barely 17 when he was cast as McLovin in Superbad, and though his screen charisma made him an instant household name, few thought he'd be able to break free and carve out his own career. But he has. Slowly and steadily, he's picked roles that baby step him away from typecasting. He'll still play geeks, but he's playing a range of them: rich geeks (Kick-Ass), role-playing geeks (Role Models), pre-Christian geeks (Year One) and here in Fright Night, a geek named Evil Ed who's truly frightening. (Kinda.) If you haven't seen the original film, this entire interview gets a spoiler alert—watch it this weekend and report back after to hear Mintz-Plasse's bloody thoughts on vampire sex appeal and his plot to get vengeance on co-star Anton Yelchin.

The most awkward thing about playing a vampire must being the moment on set when you have to lean in and bite someone's neck.

It's pretty intimate, actually—it's scary because the teeth that they put in my mouth were extremely sharp. There was one day on set when Colin was testing out some special effect with all this blood and he bit the stuntman and punctured his neck. It was pretty bad. So it's kind of nerve-wracking to bite someone with those teeth, but thankfully nothing bad happened after that.

Wait—how could they tell what was real blood and what was the fake blood?

It was definitely all fake blood! There was no real blood there.

Why have people been so fascinated by vampires for centuries?

I think it's cool that vampires as of late tend to be very charming and sexy and they have this power over females—or males, if the vampire is a female. There's zombies, but zombies tend to be flesh-eating dead people. There's werewolves, but werewolves are super hairy. I think that people love the fact that vampires are so close to humans, but so far at the same time.

And, unlike zombies, vampires are associated with wild sex appeal. Did you feel any pressure to take off your shirt?

I think you could have been a sexy vampire if you'd been given more time to learn your powers.

But seriously, is Colin Farrell's sex appeal that crazy in person?

Oh my god! There was one time this year at Comic-Con where we were doing a photoshoot—me, Anton, Imogen and Colin—and Colin had to go do a second photoshoot for the Total Recall remake. Jessica Biel and Kate Beckinsale ran up and he was just wooing them and holding them by the hips and I was like, "F-k, Colin Farrell is so sexy!" It's insane. And his accent is so sexy—he could get any woman he wants, it's ridiculous.

There's a scene where you're attacking Anton Yelchin. How much of that aggression was resentment over him abandoning your friendship and how much was just raw vampire hunger?

You and Anton have become friends in real life. You're both the same age and live right next door.

Is your plan to become so cool you dump him?

That's my goal. My goal is to become too cool for Anton and disown him. We'll see how that goes.

When you rewatch the original, it looks so '80s. Do you think 20 years from now in 2031, this Fright Night will also look ridiculous?

I hope so. You can tell when a movie is from the '80s and I think CGI is just going to keep getting better, and cameras are getting crazier, and I think 20 years from now, this will look super 2011esque.

Yeah! Kick-Ass had a couple fights and Fright Night did, too. It's fun to get to do that because I'm not a very strong guy, so I like to have to work out for a little bit and get into some fights.

If you could write and greenlight your own project, what would it be?

You know, one of my good buddies is writing is a screenplay for me and Dave Franco to star in, so hopefully that gets picked up.

You and Dave Franco are really good friends—you did that Funny or Die skit together. What was it like having him play this bully who bosses you around in Fright Night?

He's one of my closest friends, but he played a huge d-k in this movie, especially to me. But it was cool to hang out with him because we'd never really done anything before together.

But you turn the tables in your next film, The To Do List, where you play a guy who hooks up with a girl his friend likes just to mess with him.

Yeah, I play the d-k now. [Laughs] I play the best friend of Johnny Simmons and he's in love with Aubrey Plaza, but Aubrey just wants to hook up with a bunch of guys and I'm such an asshole I hook up with her.

Are people surprised when they meet you that you're different from your film roles?

I don't know? I don't think people really care how I am in real life as long as they get to take a picture with me and tell their friends they met me. I don't think they really care to have a conversation with me. But they're all really sweet and really nice and I'm always happy to do it.

I heard you were working on a hip hop album with Tom Felton, Draco Malfoy of Harry Potter?

We both played villains in our last movie so we're thinking about writing a rap album about villains.

There's a lot of material there.

There is, but he's a busy man and I'm busy right now, so hopefully by the end of the year we'll get a chance to do something.