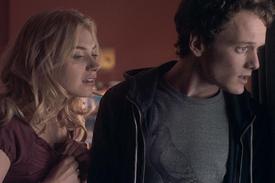 Though she's only 22, Imogen Poots has already worked with Natalie Portman, Phillip Seymour Hoffman, Michael Douglas, Colin Farrell and Michael Fassbender—and that's just in the last five years. With high-profile turns in everything from Solitary Man to Jane Eyre to Fright Night, the wide-eyed, big-grinning British blonde is being branded the next big thing. Boxoffice caught up with Poots via telephone last week for a brief chat about her new film Fright Night, in which she plays a fresh-scrubbed girl-next-door type who finds herself kidnapped from her boyfriend Charley (Anton Yelchin) by a bloodthirsty vampire named Jerry (the aforementioned Farrell). Good news, fellows: She likes nerds.

Did you wanted to pay homage to the original film or maintain a safe distance from it?

Well, I think what makes the original to important to so many people is it reached out to this specific era and society—everything from visually to the way people conducted themselves, the music they listened to, what they were seeing in magazines, all of that. It was a real shame to lose that in a character and it's what makes the original so brilliant. So in that respect, it was really important for me to pay homage to the original. It's not that I'm a cult follower by any means—I actually watched the film for the first time when I knew I would be doing this version. But it was always important and it's an interesting decision to make whether you pay any attention at all to the way the original was done, or whether you approach it with your own eyes and that's the end of it. It was important to give the character of Amy a heartbeat of my own creation, but at the same time respect the premise and the intentions of the original film.

Is this the first time you played a straightforward, normal American teen?

I've played American roles before, but I can safely say I never the American girl who's got the blonde hair, the whole kaboodle. But it was a fun adventure to go on. And it was made cool by the fact that I was collaborating with Anton Yelchin, because he's a special friend and during the filming of the movie, we definitely bounced off one another's energy. So you're not just playing that straightforward girl, you can kind of embody her from a place of humor and farce, too, because of how fun and ridiculous the situations they find themselves in are.

How savvy did you want to make Amy about how Anton's character is constantly hiding the fact that he was dorky in the past?

I think what's important—and hopefully that was established in the scene with Dave Franco—is that whole concept of how moronic the people you're at school with can be. These phony, awful people who are working on their identities. And often in those situations, and in those social microcosms, you figure out what's important to you. I think in a way, Amy is represented in the script as someone who is very sure of herself and intelligent and is her own being. Charley is still figuring all of this stuff out and he's insecure, and I think that's endearing to her because Amy has probably spent a lot of time dating the Dave Franco characters and I'm sure she's done with it and bored. And I think around that age, about 17, 18, it's when I found myself as a girl definitely being intrigued by another sort of guy: someone who is going to treat you differently, or expose you mind to something new. I think that's what Charlie does. He caters to the needs of that which is geek chic, and I find that really attractive.

Our readers will be really happy to hear that. What's sort of harder to find your way through: the normalcy of being a regular high school student, or the heightened fantasy of vampires?

It's difficult, the idea of being the straight protagonist. But at the same time in order for the film to work, that's extremely necessary because you have to bring the audience to a place of belief and they can only believe if there's something accessible they can relate to. I do hope that they will find that in Amy and Charley because you've got those elevated characters in Jerry [Colin Farrell] and in David Tennant, and in order for those characters to really work and for the audience to love them, you have to have some sort of normality and a balancing factor. But at the same time it's cool because Amy and Charley definitely get involved in the action. Amy knows that this is ridiculous, but she's still about to kill a vampire and she's actually scared. And I think you have to come from a place of pure sincerity—the funniest situations in life are never meant to be humorous, and the funniest people are often the most straightforward.

You've played Jane Austen heroines, an incestuous daughter, a Celtic witch—how difficult has it been to find this kind of amazing variety of roles?

All I'm aware of is the material that I read. Obviously your opinions are formed by those around you and your own instincts, so I feel that I've been really lucky to work with directors who believe in the roles that I play-they're not just dismissed as women or objects. I'm by no means a hardcore feminist in that way, but it was important to me to recognize Amy isn't just the girlfriend. She's just as capable of killing a vampire as Charlie is, and she stands her ground and kicks ass in the film, too. The director Craig Gillespie really didn't want Amy to irritate—the worst thing is when you think, "My God, can this blonde just die already, she's in the way!" But in terms of looking out for female roles, it really comes down to the material and the people you're working with. I think if you get in the mindset of, "Every woman I have to play has to have a right to be there and a reason to be there and shouldn't just cater to the male protagonist's needs," I think that can actually isolate you from working with some great artists. If you believe in the character and think there's something to be done there and a story to be told, then it's worth doing.

Distinguishing a character is a necessary challenge, particularly since actresses don't always get roles that are automatically as interesting as some of their male counterparts.

I think with something like Fright Night, it's a lot of fun. The characters, some of them are elevated beyond reality, and some of them are going to be realists. So you commit to that aspect because any kind of filmmaking is a collaboration. It's the amazing artists behind the film who are perhaps sacrificing their renaissance abilities and just bloody well doing a vein on a face because that's what the movie requires—and it's going to be a bloody good vein at that! You're aware that you're not a pawn in the mix of things, but you're fulfilling a role, and that role is required to make the story work. But that doesn't mean you should sacrifice creative inspiration or abilities. You should, if anything, delve deeper and find something that's really special. Because otherwise, it can just kind of creatively disappoint you, and you walk away and you're not fulfilled. Fright Night is very much a film I was satisfied by because I was surrounded by people who were elevating what could be just a commercial beast, or something disposable, into something meaningful. I could see when I went to Comic-Con it was a film that meant a lot to people, and that's important. But fundamentally it's fun-that's what it comes down to.

How formal is your process of preparation as an actress?

I was never formally trained—and formally trained, I presume, means a drama school background. I never did that. But I started acting when I was about 15 alongside my time at an academic day school. It was very much juggling those two things—education was really important to me, too. So it was really a matter that I just continued on and hoped that there were still going to be auditions to go to after school. In that aspect, I didn't formally train. In regards to preparation for the characters, every single character is so different and so diverse. Right now I'm playing a girl in a film about Jeff Buckley and the nonexistent relationship between him and his father. I'm playing a girl who's in the presence of Jeff, so they build up this dynamic but she's informed by performance art and literature and she's informed by music from the ‘60s. All of these contributing factors enable me to learn something different and that really has to come from curiosity-and that's how you educate yourself through your work and you can give something back to the work that way. The preparation process is constantly changing. I really couldn't say whether it gets easier or harder because I'm working it out myself, but I've certainly been lucky enough to observe other people like Phillip Seymour Hoffman or Colin Farrell or Michael Douglas and how they conduct themselves. They really just have this sense of play and what hit home was that sense of play and it's a really beautiful, golden gift that I've had the chance to be exposed to in their presence.

95 percent of the interviews about you describe you as "one to watch." What sort of pressure does that put on you?

I think there's always a pressure, whether it's coming from the industry or coming from yourself. I think success has different meanings for everybody. But I think it's important to be ambitious because if you're in this industry, there's something you want from it. And I know what I would like from it is to understand it from an artistic point of view and open my mind to many different creative outlets within the industry and hopefully give as much back to it as you are taking. But I think in terms of people putting you in some sort of "one to watch" or "one to rise" category, we're so disposable, we're so interchangeable, and I think you probably hear this from a lot of young actors, but I think the important thing is to focus on the present. And that's the hardest thing to do, to step outside of now and acknowledge that, "Yeah, I feel really lucky and very privileged," and not get lost in the whole mechanics of it all. Because then suddenly you're 50 and your life is gone. Not that your life is gone when you're 50, but that your life isn't like it was when you were 22-you have to remember that I just saved that. [Laughs]