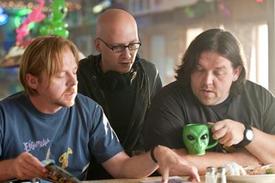 This week, Universal Studios Home Entertainment releases the Blu-ray of Greg Mottola's sci-fi tribute Paul, a geeks-meet-alien comedy starring Simon Pegg, Nick Frost and the voice of Seth Rogen as the extra-terrestrial. Alongside both the film's theatrical cut and an unrated version and a commentary track, the disc is packed with a blooper reel and a featurette about the evolution of the special effects work that went into creating the alien. Boxoffice joined a small group of journalists for a dinner in Los Angeles, where Paul star and writer Simon Pegg and director Greg Mottola talked about their problems with being their movie being seen as a genre homage and what audiences didn't appreciate about Jar Jar Binks.

The film pays homage to a number of classic sci-fi films. Why do you that making references or paying homage sometimes gets a bad rap?

Simon Pegg: I think there are less references in Paul. It was never about the references for me and Nick. The film itself in some respects is a reference because it accepts the existence of its progenitors. We didn't go out there to make a film and say, "This is totally original." It was like this film is the child of other films and we're saying we know that. It's a postmodern film in that respect in that it's absolutely aware of its forebearers. There's a difference between referencing and just copying stuff. We don't have a list of films we wanted to nod to. I have to give Greg credit for the [Star Wars] cantina bar music in the bar because it felt like that was the way it would be. If Graeme [Pegg] and Clive [Nick Frost] walked into a bar that was shady, that's how they would see it. "Oh my God, it was like the cantina." The film is almost how they interpret their lives. Spaced was very much about two people recanting their lives and using popular culture as a metaphor. Paul is a little bit of that as well, but there's a difference between referencing and just recreating scenes.

You see those films like Epic Movie and they just replay a scene from a film with other actors and that's supposed to be funny? Just noticing it? There's more farting? We didn't want to get laughs like that in Paul. It was more a layer of intertextuality if I can sound really up on myself. I guess it's quite now-ish. Referencing is like things happen and then the mainstream catches up with it and it starts to do it, too. I think the whole of nerd culture or geek culture, whatever it's called, has now been slightly assimilated and hegemonized by the mainstream now that the marketing people have realized it earns money. All the big noises this summer are comic book franchises, traditionally niche markets which are now making lots and lots of money. That's partly to do with the fact that we as human beings have a tendency towards infantile regression and it's partly because that's the way society works.

What sort of extra content is included in the extended cut?

Greg Mottola: There is more stuff with Shadowchild [Jeffrey Tambor's ridiculous cult author]. There's the quote that comes back. Stuff we liked but we sacrificed for pace.

SP: I was a little against the idea just because I felt like we had our film and that should be it, but I think Greg's right. With the deleted scenes thing, there are loads of deleted scenes that we could've put on but they would have Paul in them. Of course Paul isn't finished in those scenes. It'll be the model or the ball or Seth's weird superimposed face. Even though that would be quite interesting, I think it would be a little tiring to watch. They were nice scenes. There were scenes with Ruth [Kristen Wiig] and Paul talking about stuff outside the fireworks. I would've liked to have seen those scenes on the deleted scenes but I think they would've been pretty unwatchable. I think it's a good way to see a little bit of stuff you didn't see in the theaters but not have to play all and all that s--t that sometimes you have to do.

GM: In a perfect world, we probably would've made this a much lower budget film for various reasons of content and just to put more on the screen. The reality of doing an alien today was, "Do we make him a puppet and save a lot of money or do we make him CG and try to make a funny CG character?" Once we made him CG, the cost of putting Paul in CG in the movie is 1/3 of our budget. When you take Paul out of the movie, we're not that much bigger budget than Superbad. At the same time, I think we felt like that was a challenge. It was an interesting challenge for me. I wanted to learn about the technology, but it's a huge leap. I don't know how you could've made such a fast-talking character, wise-cracking alien who's puppeteered that an audience would accept now. You could make someone in prosthetics. You could put an actor in a suit.

SP: Nick and I did say a couple times, "What if Paul was a giant rabbit? What if it was a guy in a bunny suit?" [But] people these days I think demand so much from reality. When you think about how much we used to suspend our disbelief as kids, when we first saw the cantina sequence in Star Wars, you look at it now and some of those masks are pretty ropy, but they were certainly not in the day. They were amazing. It was fantastic. Any kind of artificiality we detected, we just let it go because we were prepared to meet them in the middle. We're not now. If CG doesn't look absolutely f--king super real, we say it's rubbish. I think it's amazing in a way, but it's a testament to how awful Jar Jar Binks was. It was actually amazing for some animators to put a real CG character into a movie. That was pretty clever. It was just overshadowed by how terrible it was. Now a slight moment of artificiality and we fold our arms and say, "No good, sorry, that's just not good enough." So the idea of Paul being a puppet would seem like we're making a comment about puppets. It had to be so real.

Is writing with Nick very different from writing with Edgar [Wright, who co-wrote and directed Shaun of the Dead]?

SP: A little bit, because when I write with Edgar, he's the whip-cracker and I'm the savant. Nick and I are both just lazy bastards. I took on that role of the patriarch I guess. It was a lot of fun, I laughed. Edgar and I are very studious. We laugh a lot but we also spend a lot of time scratching our heads. I don't think a day went by writing with Nick where I didn't almost piss myself laughing because he makes me laugh so much and it was such a fun experience to write that film. It's kind of different, but we still sit opposite each other, it's very collaborative, we rarely write alone. Edgar is my dear, dear friend-but Nick's my best friend so working with him is a bit of a treat.

Does the end result come out different?

SP: I don't think so. Not really. I think Nick might even take a part with our next film, we might bring him in a little sooner to help us with the creative process just because he's a great natural talent, Nick. He's got an amazing comic mind and he's a really good person to have on your side.

Is your next film with Edgar another genre movie?

SP: I don't know. One thing Edgar and me have discussed, we've been away for a weekend and got things going, is that we're not going to just do what we've done before. Even though we want this film to be like Shaun of the Dead times Hot Fuzz, we're not the genre guys. We didn't set out, "Oh, let's do zombie movies!" We wanted to do a zombie movie and we wanted to do it in light of the fact that most British films were romantic comedies—and we thought it'd be funny to make a romantic comedy and a zombie movie at the same time. We weren't setting out to say anything about zombie films. Shaun of the Dead makes no comment about zombie films whatsoever. It simply dons that jacket. Hot Fuzz was a little bit more of a parody in some respects because we were offsetting very stereotypical ideas from action cinema by putting them in a different context. So that does comment on homoerotic subtext and the bizarre histrionics of that kind of violence. So that was more of a comment on a genre but that's two films and they're both different. This one might not be either of those things. I think people want to figure us out and they want to know who we are. That's not it. So we're not going to do, "Okay, let's do cowboys next."

Will it end up being called A World's End?

SP: Edgar said that in an interview and now it's called A World's End. It's just like Paul again. Shaun of the Dead was a working title. We thought, "We can't call a film Shaun of the Dead. That's a terrible joke." And then it got out, so we did.