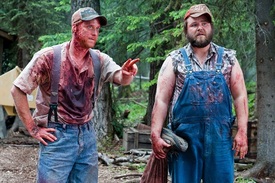 A rural cabin. A pack of hot teens. Two chainsaw-wielding rednecks. Tucker & Dale vs. Evil has all the classic ingredients for a horror film, but Eli Craig has instead whipped up a bloody great comedy about red state stereotyping where the college kids mistake the rednecks for killers and go on the attack. But frat guys are so clumsy, they keep accidentally offing themselves and setting off even more panic. The real victims are the two backwoods boys who think they've stumbled across a teen suicide cult: Tucker (Alan Tudyk of the upcoming Abraham Lincoln: Vampire Hunter) and Dale (Tyler Labine, just seen as the contagious chimp handler in Rise of the Planet of the Apes). In this cheerful, chatty interview Alan and Tyler are still so buzzed from the great reception Tucker & Dale got at Sundance that they and director Eli just want to toast their cult comedy by talking about rednecks and beer.

How did you guys get into character as Appalachians? Alan, you're from the El Paso desert and Tyler's Canadian.

Tyler Labine: Well, we Canadians have our rendition of those backwoods rednecks.

Tyler: No, no. I'm talking about the honest-to-goodness, coverall-wearing equivalent to the Southern accent that we're talking about here. The Canadian equivalent sounds something like this [in a low sing-song]: "Hi-yo. What's happening, buddy? How you f--king doing, man? You wanna go out and get drunk, get pissed?" That's how we talk, the Canadian rednecks.

Alan Tudyk: Is that Newfoundland?

Tyler: It's a mix of maritime meets, uh, just a lack of education.

It kind of sounds like talking with your mouth full.

Tyler: Really? I don't hear that at all. I don't know where that comes from, but it's a pretty universal redneck accent in Canada.

Tyler: Yeah, wanna talking like that? Try it. Let's hear it. Can you do it?

That'll come in handy when—

Tyler: When you have to flee the country. I'll see you at the border. [Laughs] We'll have our pitchforks. Woo!

But seriously, how do you research being Appalachian?

Alan: I don't think we did. I don't know anything about Appalachian people. The idea that they're hillbillies as being seen by the college kids, we approached it as it's their perception of us—we're just good ol' boys—so I just borrowed from what I knew from good ol' boys in Texas.

Tyler: Yup, there's good ol' boys in Canada, too. Calgarians, for instance, where we shot the movie.

Alan: There's a lot of them!

Tyler: Calgary, that's a cowpoke town, man. They're all farmers and cowboys and big beef and oil towns. A province, I guess I should say.

Salt of the earth?

Tyler: Yeah, definitely. As far as the accent—

Alan: We looked on YouTube and found people in West Virginia and just listened to them for a while and picked out certain qualities and made sure we put them in. But then I just slipped into Texas.

Tyler: And I just emulated him. As long as we sounded the same, I figured my best way of sounding authentic was following a guy who has an authentic Southern accent, right? And if we sounded like we had different drawls and different accents, it just would've been weird. Plus, after a few days of being with Alan, it just all blended into one. We just sort of generalized our accents a little bit. But it was tricky. It's not an easy thing. It's not an easy accent to adopt and make sound naturally. You can sound really, really stilted. Especially, it's hard to ad-lib stuff with an accent because your first thought is to say what you're thinking, but you have to pass it through the accent filter, and then it comes out and a lot of times it just sounds bad. So my accent drops out a couple of times in the movie, but it's worth it for a laugh.

What were your favorite ad-libs that you guys came up with?

Tyler: We can talk about that all day! I have a couple favorites. One of my favorites is, when after the body goes into the woodchipper, you ask him if he's okay-that's a funny one. "Are you okay?" Blood and guts all over him. I loved "Body Perm."

Tyler: I just loved that one as a nickname from the preppy college dudes. He had a loose, curly element to his hair. Just call him "Body Perm" or "Body Wave," as in, "Shut the f--k up, Body Perm."

Alan: I want to call him "Collarpop!"

Tyler: What are you saying? Collarpop?

[Tyler and Alan repeat "Collarpop!" to each other testing different accents and intonations]

This is one of those movies where the audience really feels that everyone was having a good time on set.

Tyler: No, no. Not by any stretch of the imagination. It was challenging.

Alan: It was fun.

Alan: It was challenging because of the pace that we had to go to complete it. We had 25 days. Shot nights. During the summer in Calgary, there's very short nights.

Tyler: Barely time for one take.

Alan: One takes, two takes, sometimes three takes. Every time. There isn't one shot in that pic that was exhausted as far as takes go. It was just, "I think we got it, guys. I think we can move on."

Tyler: For example, that crying scene where Katrina [Bowden] wakes up and she's like, "What happened?" And I'm like, "Your friends are crazy!" I think I got two takes at that.

Tyler: Well, because it was huge cabin day that day. And we were still trying to shoot some of the night. We only started halfway through the day and we would get everything before the light all went out in the cabin. I mean, we could shoot a little day-for-night but we just were in such a rush I got two takes for that. It's hard because those are moments that you wanna explore and play around in and you don't have the time. You just don't have the time. Your producer's there and they got their hands on their wallets and they're just like, "No, come on. Stop where it is. Move on."

Did you guys start by just drinking a bunch of beers together? How did you get this friendship bond started?

Tyler: I guess the first big bonding thing, we decided we were going to get together and work on a script and write a back story and figure out what we were going to do and make sure we weren't leaving any stones unturned.

Tyler: Me neither. You hear about it, that it exists, that other actors do it, but I've never actually done that.

Alan: We threw out some ideas, put down our guards.

Tyler: We had a sturdy foundation. Laid down some groundwork and it was like, "All right! F--k s--t up! Shake it around and see what happens!" And then the drinking. I'm not going to lie. There was a fair amount of imbibing going on.

Alan: Yeah. The beer in Calgary is much stronger.

Tyler: It's like saying to an Australian, "Is it Foster's?"

Eli Craig [director, walking up to join the conversation] You guys talking about beer?

There's a Canadian restaurant in California that has Molson's on tap.

Tyler: There is? It's a huge Canadian beer. But it's not good.

Alan: Screw you up. It's strong.

Tyler: Yeah, and we have a lot of winter ales. It's a colder country.

Eli: Is there a minimum? Utah has a maximum content.

Tyler: It's designed to get you pissed.

Eli: Speaking of beer, did you ask him about the powers of Pabst—

Alan: You came to me with the bee stings and poured it on my face. I was so glad when we did that. "I want to pour this beer on my face. Can I?"

Alan: In every other film situation, makeup would go, "No, because then we gotta dry you off, and we gotta clean you up, and we got too many takes, we've got too much stuff to do that day."

Alan: Exactly. Thank you. So just everybody knows, I'm gonna pour beer on my face. So makeup people, wardrobe people, let's get some towels ready because we're going to do this and I don't want it taken away from me.

Eli: He's gonna take a sip and it goes right to his face.

Alan: I was going to pour it on my hurt fingers. And I never did it because we were running out of beer, and B) I was in a hospital..

Tyler: I had one Pabst left that was given to us for free.

Eli: We had to go to another country to get it.

Are you serious? You were rationing Pabst beers?

Tyler: The whole time. A lot of those scenes were just cans that were sitting around and we would just rinse them out and put water them in and fake-open them and add in sound effects.

Pabst is having such a hipster revival.

Tyler: I know, man. It's like, f--king Parliaments and drinking Pabst is all cyclical again.

Tyler: Yowza. There's a big hipster movement in Vancouver. You get your flannel, your skinny jeans, and your jean jacket, and you smoke Parliaments and drink Colt 45.

Tyler: That's the thing now. You've got one big 40 in a brown paper bag.

Tyler: It completes the image.