close
INTERVIEW: The actor talks about bucking Hollywood convention, and what's going on with Sin City 2 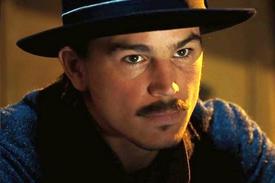 Josh Hartnett never wanted to fit in Hollywood's box. The handsome Minnesotan was just 20 when he was thrust from steady, low key work shooting commercials to a major big screen role against Jamie Lee Curtis in the horror reboot Halloween: H2O. Overnight, he became the heartland's favorite hunk and a continual nominee at the MTV and Teen Choice awards where he competed for such laurels as Best Breakthrough Performance and Best Chemistry. But look beneath the pretty face and you can see a male starlet determined to be taken seriously. Hartnett shunned straight romantic comedies (he's only ever done one, 40 Days and 40 Nights) for roles in Black Hawk Down and the high school Shakespeare adaptation O. And even when he did get the girl in Pearl Harbor, The Virgin Suicides or Here on Earth, by the credits, one of the lovebirds always ends up dead. As he approached 30, Hartnett took advantage of graduating from teen stardown to take on roles in quirky thrillers. His latest, Bunraku, is his oddest yet: a neo-retro noir when the men wear kimonos and kill each other with katanas in a heightened, violent world somewhere "east of the Atlantic." Visually, it's unlike anything audiences have ever seen. And for Hartnett, it represents a new frontier in his quest to carve out a career on his own terms.

Bunraku is a wild-looking samurai western made by someone who's never made anything like it. What made you trust him?

Guy Moshe came out to New York. He made a visual presentation before he'd allow me to read the script. So the visuals seemed secondary by the time I read the script. I just really respect somebody when they come to me and they say, "I don't know if I can pull this off necessarily, but I'm gonna try to accomplish this and this and this. And here's how I'm gonna do it." Their ambition is larger than the average person's.

Did the stylization of the film put different demands on you as an actor?

Well, the one thing that was different about this was the physical aspect. I'd trained in the past, but I'd never done serious fight scenes like this. It was harsh, but it was a lot of fun. With the physical stuff, it's just choreography. And when you don't get it right, people are still awed by your ability to get most of it right, so it's kind of a win-win situation. And in a fight sequence, everybody's on your side, so it was awesome.

Your character doesn't have much to say other than very pointed lines like saying to Woody Harrelson's character, "I ain't your son." Who is he under the surface?

For the most part, he's a physical creature. He's not, like, incredibly verbose. Everybody else seems to have some speeches, but not the Drifter. As far as lines go, there weren't a lot of cues, but I think that I just came up with a solid, what I thought was interesting, backstory, and a lot of that is reflected in what he's wearing and how he holds himself and what his reactions are to everything that's headed his way. He's got a very simple part in this. He's at a simple place in his life. He's just there to avenge. This isn't a story of him coming-of-age or anything-he's already made. So I didn't think it was that difficult to find the emotional core of him. It was fairly simple.

Did the film turn out the way you expected, or was it different than you could have imagined?

In a film like this, because the script is actually quite long and our production budget is not particularly high, we had to sacrifice certain things. There was more back story in the original script. But you never know how something like this is gonna turn out. I didn't know what to expect when I signed on-I wanted to see what I was gonna do. I was fully onboard. I had a sense of what he wanted and I just went with that. It was more based on instincts. I said, "Can we just make the Drifter have some sort of weakness, because in the original script he just kicked ass." He's on top of things a lot, so I said, "Why don't we make the Drifter afraid of heights?" Looking objectively at the final project is pretty much impossible. I'll just say that with what I saw, I was really pleased with everything that Guy accomplished. I like his tenacity in sticking with his vision.

When you first started out in Halloween and then Pearl Harbor and O, it seemed as if Hollywood was very determined to make you into a movie star, but you were always more interested in just being an actor. Now that you're a little less in the spotlight, does that feel like an advantage or disadvantage?

Being in the shadows is a good way to explore something new. When you have a lot of expectations, it's very difficult to make rational decisions. But I enjoy being a little bit more on the outside, and I think that over the last years, I've done some films that I really like. They haven't been seen all that widely, which has been difficult to take because everyone wants their work to be seen. So, I don't know, man. I'm always trying to make films that are interesting to me, that are new for me. In this film, I had never done anything physical—not like this. No fight sequences really except for Black Dahlia, which is one boxing scene. And I thought it'd be really interesting to take this on and not do it in the same old way? I get as sick as anybody about the same old films coming out: the same character dilemmas and similar visuals—it gets a little old.

Robert Rodriguez said that if he's going to shoot Sin City 2, he's going to do it this year. How much did shooting the first Sin City help you make this one-and conversely, how much will this one help if and when you go back for Sin City 2?

Sin City was so bizarre. We did a lot of green screen work. That was pretty much the only green screen film I've done. And I mean, the characters are completely different, but being on a sound stage for exteriors is kind of what filmmaking is all about. I didn't find that part odd either time. I don't know, maybe you think I'm in the minority there, but I actually don't mind acting against a ball on a stick. I don't mind that being my scene partner. It doesn't bother me. It's all in my head anyway.

Have you actually spoken to Robert about getting the cast back together to make Sin City 2?

He kind of owns the offsite film industry, in a way. He just works when he wants to that makes it easier for everyone to come down and do their part. The nature of those stories is that everyone's kind of separate. People interact but all the actors don't have to be there at the same time. But no, I haven't spoken to him about any participation in it-who even knows what the plot line is?