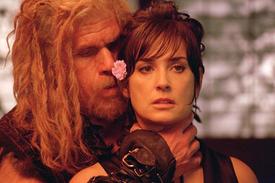 You can't miss Ron Perlman—literally. Not only does he have one of the most memorable faces in Hollywood, this year alone he's in 11 movies and five TV shows. What's striking about his career is that Perlman's a self-described workaholic who thrives on working with unknowns. This week, you can catch him in Guy Moshe's bizarro-world Bunraku, a Samurai Western that stars Perlman as Nicola the Woodcutter—a villain who must kill or be killed by a vengeance—seeking Josh Hartnett. But first, Perlman talks to Boxoffice about one upside to his quirky career: he's toured the Eastern Bloc.

You like to throw your weight behind new directors and unusual projects.

The great thing about young directors and first-time directors is that they're fearless. They have nothing to lose. They're not protecting their house in Bel Air or their place in the firmament. They're daring to bring about something that's going to get the attention of the world. That's an exciting way to work in cinema. My first experience with that was shooting a movie named Chronos with a young Mexican filmmaker who'd never made a movie before: Guillermo del Toro. At the risk of sounding hyperbolic or corny, it was a life-altering event to me. I like working in independent cinema among people who dare to do things completely differently that anyone else. It's like being reborn—like being reminded of the initial impulse of why I wanted to get into the business in the first place.

Has that ever backfired?

Yeah, it's backfired on a number of occasions, but I don't regret any of those. I joined onto those things for the right reasons and hoping for the best. Guillermo del Toros are few and far between. In fact, there's only one. So even though you try to make lightning strike twice, the chances of that happening are pretty slim. But I love the sense of adventure and I love that Guy Moshe, who's making his first big film, is utilizing all of these major names like Woody Harrelson and Demi Moore and Josh Hartnett and Gackt and Kevin McKidd—these new directors deserve all of the support and the love and all the nurturing that they can get. Bunraku doesn't look like anything you've ever seen before. Whether you like it or not, whether you think it's a good movie or not, is almost beside the point.

Because an ambitious failure is better than a film that plays it safe.

Your Nicola the Woodcutter is the obvious villain of the movie, but do you see him as a villain?

I found this particular character interesting on a multitude of levels, and the more we worked on him, they more interesting he became. What struck me about him is that even though he has this undeniable lust for dominance—he basically owns everyone and everything as far as the eye can see in this twisted, deteriorating world-there's a profound loneliness to him. There's no one that he can call an equal. There's nothing that he aspires to. He's holed up and completely isolated from all manner of reality. He's a really melancholic figure for someone who's achieved as much as he has.

He almost seems like he wants to be defeated.

He wants to be reminded that he's human because by conquering all of the things that he aspired to, he's superseded anything he could have possibly dreamed of, including the possibility to feel human. He knows the day is coming. He knows there's going to be somebody coming for him who's younger, faster, more skilled—there always is. That's the ongoing theme of all great Westerns and Bunraku is part Western.

That's interesting when great nations and Ponzi schemers both seem to think they'll have power forever.

Right, and that never happens.

The film has such a wild, unearthly look, but by contrast you chose to underplay your character.

I had to research because I'd never heard the word "bunraku" before. It's a highly stylized Japanese form of storytelling that involves multimedia like paper mache figures, puppetry, elements of comic books all in the storytelling. You know you're going to wind up in something highly stylized. But you've been hired as a actor to find the reality of the character, so your job is no different that it would be in any other film. It's just: who is this guy? What is he aspiring to? What is he afraid of? How does he behave when he moves trough the universe? Then the rest of it happens around you.

You shot the film in Romania—what did you do in your downtime?

I wasn't off very much. I had another job I had to get back to, so they needed to shoot me out in two weeks. I should have been there all nine weeks of shooting, but they condensed it. I didn't have much of a chance to experience the local finery that is Bucharest, Romania.

With all the stray dogs.

With all the stray dogs. I saw plenty of that because we had an hour drive from the hotel to the studio. They're everywhere. Ubiquitous. It's kind of heart-wrenching. It's sobering to see the aftermath of what was one of the most horrific reigns of terror every perpetuated on mankind: the Ceauşescus. They left an imprint on the society that will take a long time to erase. Movies are getting made in the weirdest of places because they'll go anywhere to save a dime. I've now worked twice in Budapest, twice in Prague. I've worked in Kiev and Moscow and Croatia. I've gotten to experience a lot of the post-Perestroika results of that 48 years of existence where no one's destiny was in their own hands. Some countries have come out of it better than others. The Czech Republic has a highly articulated infrastructure—the people there feel like they're doing well. But Romania is going to take some time to get past what it was put through.

Directors and costumers seem to use you as a canvas—you've had such a range of crazy looks.

With Bunraku, no one knew what Nicola was going to look like until I walked out of the make-up and costume trailer. Including me. I walked in and there were these two cool English girls doing hair and make-up and they said, "Well, here's how we think about it." And I said, "Well, here's how I think about what you just said." So then they start trying stuff on and then we end up with these dreadlocks, and they had a very good reason for why his hair would end up this way. And then we got this goatee and they had a very good reason why he would wear his facial hair this way. And then we ended up with these rose tattoos because he bathes in rose water and he's obsessed with it. So one thing led to another and suddenly Nicola was born without anybody really having any predetermined concept of who he was until it happened, until we looked at it and said, "Yeah, that looks pretty interesting, and I love the reasoning—let's go with this."

What was the reasoning for the dreadlocks?

I can't remember. But we sure thought it was cool-looking.

I'd be impossible for me to pick. In Hellboy, I would look at myself on playback and go, "That's the most amazing, most compelling visual character I've ever seen." I've had an abundance of really amazing artists working on me. The Name of the Rose, I played a hunchback, and that character happened right in the chair in front of our eyes. You have a generalized view and then when the actor shows up, he's got all these quirks and you figure out how to make it work.

You also look good in the tracksuits in Drive.

[Laughs] That, I had nothing to do with. That was Nicolas Winding Refn's conceit. He said, "This guy should always be in velour tracksuits."

You're so busy—is it hard for you to say no to projects?

I'm a workaholic. It's impossible for me to say no to ap project that is being approached when the reverence that Guy Moshe approached Bunraku, that Nicolas approached Drive. It's impossible for me not to bend over backwards and say, "I'm showing up for this no matter what the cost is, no matter what it does to my schedule, no matter what vacation I had scheduled. I'm showing up—I just gotta be a color in these guys' paintbox that ends up on that canvas." It's a true joy to be part of the gestation of that. And I seem to have more energy the older I get. I'm just going to keep doing it until I can't anymore.

Next, you're playing a woman named Phyllis in the movie Frankie Go Boom.

I will guarantee you that I am the ugliest broad you'll have ever seen.

But it's not just looks—how did you get the motions and the walk?

I gave it no thought whatsoever. I said, "I'm going to learn the lines. And they're going to say action. And I'm going to start talking." The only thing I decided to do on the drive to work that day—because I only worked on the film for one day—was that my voice was going to be lower than my own voice. Like Harvey Fierstein. And then let it rip. I cannot wait to see the final movie. It's the funniest script I've read in 30 years. Without equivocation. I don't get a lot of comedies, so it's not like I've read every Judd Apatow thing that's come down the pike. I haven't read any Judd Apatow thing that's come down the pike.

By the way: there's something I've always sworn I'd tell you when the moment was right.

I'm intrigued. Let me sit down.

My friend Scott has a cat that looks exactly like you.

Wow. Wow. That's pretty cool—I'd like to meet this cat one day.