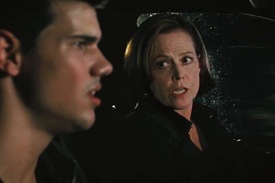 Sigourney Weaver is the poster girl for girls who kick ass. But that's not intentional, at least not by Hollywood. Weaver specializes in scooping up scripts and convincing studios to cast her in male roles-a stroke of genius and guts that's allowed her to snatch up some truly prize projects, including Ripley in Alien. This week, you can catch Weaver in Abduction playing the badass Dr. Bennett, a therapist who's can really throw a punch. But first, she fields six questions on being a fierce female star.

Why is it that people think of you for roles that are originally written for men?

I think it's awesome! The one thing I say is "Please don't change a word." I don't want them to put in some sniveling scene. There was a reporter who said, "Aren't you insulted by that?" I said, "Why? Why would I be insulted? I think it means that I play people with authority and that I can be strong and direct and all these things we think as male, which they're not."

This is a role that harkens back to Ripley a bit.

It was an interesting part because I think she probably is a therapist—although why he's riding on car hoods, she obviously doesn't know or she should talk to him about it. But the idea of having sort of settled into this life where I think she has other patients and then having to turn on a dime and find that old training, it's sort of like what I had to do. I used to be that sort of Ripley person. So I enjoy all that. I felt a little rusty. It's good to play an action part every now and then. I actually have another one in the movie called Light of Day that's coming out in April with Henry Cavill. I play another active person. Another role written for a man. I think they just thought, too much testosterone.

Is this some secret strategy your agents are doing and not telling you?

I think it's just something that's happening in the zeitgeist, actually. I'm sure I'm not the only actress. When they're casting a film, there are usually more men's parts than women's parts in any story traditionally, even in the theater, and I think they're going, "Eh, it's too weighted with men."

People have said that the problem in Hollywood is that the studios don't trust. Like, say, there's one bad movie where the leading action hero is a female, and they turn around and say, "That doesn't work."

I think that's one of many scenarios I can imagine. I think there is a lot of attention now paid to the first weekend and they don't want to make any mistakes. They don't make enough movies to just get used to making mistakes. If you are really doing it right, you are gonna make mistakes. And that's fine. I think that's good. I think that you can't blame a woman if the script isn't right. It takes a lot of different elements to make a good movie work and hit. It's very complicated these days and it's never for one reason. And certainly not because it's a woman. That's the worst reason. That's just silly.

Do you ever stop and think about central you've been to really important cinema history you've been?

I haven't had a chance to think about that. The movies that we made, they were great. You don't know that when you're making a movie. But, no, it's very gratifying. I love the inter-generational quality of our business. I love working with these young directors or people who had Ghostbusters posters all over the wall growing up and things like that. It's hard for me to believe I've been around that long, but I guess that's the case.

What keeps you going?

I really love all the things I'm being offered now. I have a vampire comedy coming out that Amy Heckerling directed. I just worked with Oren Moverman and Woody Harrelson. Now that my daughter is in college and I get to do as much work as I want, I'm very grateful that I have all this work to do because I might miss her too much. I just worked with Betty White on You Again and here she is sitting in the chair next to me going, "Make sure that I'm ready because I have to be on set with everybody else." I admire that so much. She doesn't take anything for granted. She gets out there and she's brilliant. Sometimes I just think I should garden more. I like gardening, too. Maybe gardening is harder. But I really like the variety of things I'm offered to do, big parts and small parts. They all ask for different things from me so I get to keep learning and trying something different.