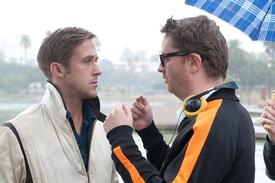 Bad things happen when you doubt Nicolas Winding Refn. The Danish director was a 26-year-old nobody when he shot Pusher, a bloody, dark thriller about a Copenhagen drug dealer that was a shot in the heart to action film fans. Pusher begat a trilogy which begat Bronson, an ultra-violent flick about Britain's most notorious convict that made Hollywood sit up and take notice. Not just of him—of Bronson's star Tom Hardy, who's name might sound kinda familiar by now. His Viking adventure Valhalla Rising didn't quite rally the troops, but it gave Refn the mojo to make his first big American picture: Drive, a sharp-turning drama that argues that Ryan Gosling, here playing a speedster-for-hire, is this generation's Steve McQueen. Drive rocked Cannes and Refn was overnight catapulted to be Hollywood's next thing. Up next: more films with his muse Gosling and Warner Bros. reboot of Logan's Run. But for today, Boxoffice corrals the fast-moving director for some straight talk about the film that's going to put him on the mainstream map.

The film seems to be about a guy who built a wall of McQueen-like cool around him, and it comes crashing down when he opens up and cares about someone.

Well, does he know how cool he is? He doesn't, because he can only react truthfully to things around him. He doesn't know how other people perceive him—he would never think about it. He is who he is.

How were you able to pare things down so that the audience understands who Gosling's Driver is without any back story?

Because the film is structured like a fairy tale. That's their strength because they're streamlined, and it's the same thing with Drive. Everything that's going on is going on in the silence, and that was the love story between Carey Mulligan and Ryan Gosling—the Driver protects purity. That's what he's willing to die for. So you have to give that a love story that is pure and uncomplicated, almost childish. But it's true.

One of the things you said at Comic-Con was that you and Ryan originally set out to make a movie about a guy who drives around listening to pop music. But do you mean for the music in Drive to exist in a real context? Chromatics isn't really top 40 kind of stuff.

Well, fairy tales have their own reality. But I wanted to set it in an urban environment like Los Angeles—a real environment, not on top of a mountain like in Valhalla Rising, or in a made-up prison like Bronson. I wanted to be contemporary, but yet retain this fairy-tale aspect to it. And so automatically the music becomes its own identity. We wanted to use music that wasn't retro, meaning things that were either old or kitsch, but they were maybe in the family of sounds that were older. However, they were also modern. And it gave this film a timelessness, because you couldn't define it really.

What was your learning curve like for the driving sequences? They almost feel like the fight scenes Martin Scorsese shot in Raging Bull.

The way that I constructed them was very much like I did the fight sequences in Bronson. Each fight sequence had its own identity, its own visual style, and its own trajectory in the protagonist's story. In the beginning, everything you see is from inside the car, because this is like the Driver's mind and he's a superhero, because the Driver is two persons—he's half man, half machine—and at night he even dresses differently than by day because he is a man who's caught between two worlds. So in the beginning and in that first sequence, it's all about the Driver's experience of being a car. The second time is when [REDACTED] gets shot, and it's real—it's his human side. But we didn't have the money to do what people do nowadays. And at the time, I had an interest in the sounds, so I had the idea that we would do a car chase that would really be about the sound of the engines, like wild horses going after each other. And the last chase, which is not even a chase, it's more like a stalking that ends in a crash. I wanted it to feel like you're just driving in a car ... and then driving a car into a wall.

There are great sound flourishes in the film. Like there's a scene outside of a grocery store where the sound doesn't come in until he walks over to Irene's car. How important are those smaller details in solidifying the whole?

They're very important because they're the small steps that the characters take to meet each other. So they're essential. And if they don't work, the story won't work.

But even the conversations between Driver and Irene have this same spareness?

It's all about what Carey and Ryan are not saying to each other. What they're having is small talk because all they're doing is staring at each other. Like when you see a girl across the school classroom, and you just can't take your eyes off of her. And you can talk about stupid things, but you will never take your eyes away, and I wanted to capture the purity of that. Well, the Driver is a smart man and he knows people well. He knows when things are not right. Shannon [his boss, played by Bryan Cranston] does things for the wrong reasons—he does it for his own personal gain, his own greed. Driver does things out of a purity of love. He's a hero.

There are so many great shots in the film that as much as they have their own artistic style, also really reflect the characters and the plot.

I don't always really know why I do what I do, because I'm very much fetish-oriented. I just go by what I would like to see and do not always understand. I don't storyboard, I don't pre-plan. I start by going through each scene with the actors and seeing what they would like to do physically, how they would like to move around, and see if that works for me. But I always see what they would like to do first, and let them investigate where they feel comfortable and not comfortable. Then once they're happy and I can see that it's going to work out visually, I place the camera where I think it's going to look interesting. And that's how it comes about. It's real uncomplicated.

At what point then do you formalize your themes?

Well, I don't set out to do it like that. I just set out to make a film that I would like. The key is the editing, where I begin to understand the film better. It's not that I didn't know going in—I understand the motivations of the characters and the story and where it has to end. But at the same time, I shoot my films in chronological order, because they also need to be flexible about how they can change and alter and mutate. This arc needs air to breathe like a painting, and you also need to let go once in a while and see where it takes you and not be bound by subscription to rules.

How much of a cinephile director would you consider yourself? You don't quite wear your influences on your sleeve like some other filmmakers, but using the music from the obscure Italian fake documentary Goodbye Uncle Tom isn't a choice that many filmmakers would make.

]Laughs] Well, I'm a huge fan of Gualtiero Jacopetti and Franco Prosperi [directors of Goodbye]. I have all of the Mondo soundtracks on vinyl, and I have all of their movies in a grand box set, and I have some of the posters. And I always wanted "Oh My Love" in the film. But I love all kinds of films. When I was younger, I was more maybe of a cineaste in the sense I was very much aware of other filmmakers or other films when I was making my movies. And I just over the years, getting older and having a family and children, soon you just start to look at other things in life.

Do you have a little internal database where you save ideas or inspirations for your films?

Oh, yes, absolutely. I can get semi-obsessed about certain things and I'll watch them again and again and again. But also a lot of times, it's figuring out what not to do, you know? But yeah, absolutely. I definitely watched Le Samourai a few times, I watched a few classics, like car movies, Douglas Sirk, all kinds of movies. But I can't do as much as I used to. Because on my first three movies, I was very aware, and I would go back and watch a lot of movies from other filmmakers that I admired. And just now, I don't have the time. Like to take two hours after I get the kids to bed, it's like 8:30, and you've got to wake up at 7:00 again. How am I going to watch a movie?

How much was Walter Hill's The Driver an influence?

Well, strangely, I'd never seen The Driver, so I actually got to see it right before I started shooting, but I knew that James Sallis had seen The Driver when he wrote the book [that Drive was based on]. But it's a great movie; I loved it.

How did you decide on things like the font you used for the credits?

That was my editor Mat Newman and I. Mat Newman is a really important collaborator of mine, and we were just playing around with ideas. He knew that I was a huge John Hughes fan, so it was pretty in pink! I think he took Risky Business or something and showed it to me, and said, "Let's put it on there."

This is a film that is going to open you up to a lot of opportunities. How much of a challenge is it to maintain creative control as you move on to bigger films?

Yeah, I mean, that's what I experienced on Drive. Certainly the financiers were just really behind me, and the producer was there to support me. It was a great experience. I thought I would have to fight them all of the way, but they were really there to help me. It was kind of odd in a way. I was warned of the possibility they would [give me a hard time], but they didn't. It helped that they didn't really know what I was doing. But by the time I'd done it, it was too late. Nobody really saw the finished movie until Cannes. But I think I will always choose my own movies because I want to be in control, and Only God Forgives [his next film in which Gosling boxes in Thailand] is like that. But on Logan's Run [Refn's just-announced reboot], that's such a huge franchise that of course I'm going to be dealing with a lot of Warner Brothers executives and marketing people, which I should because it's a big piece of machinery that needs to turn its wheels. But again, all of those people want to make a good movie, and they want to help you make a good movie, you know. So it's like playing Russian Roulette, but instead of one bullet, you have five.