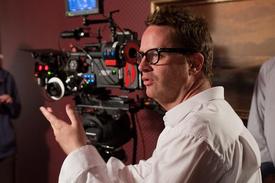 Since Nicolas Winding Refn broke into the international market in 2008 with the release of Bronson, the Danish filmmaker has spent much of his time offering slivers of information to interviewers about a variety of potential projects. One of those projects was a film version of Wonder Woman, which Refn no longer has any official association with, and its distributor Warner Brothers is no longer developing. But when Boxoffice spoke to Refn recently to discuss the upcoming release of his new film Drive (also starring Hendricks) he refused to let the lingering rumors about his involvement in a Wonder Woman die. Check out his comments below:

You have alluded to Wonder Woman many times, including at the LA Film Festival premiere, where you said that Drive costar Christina Hendricks would play the title role. But a Wonder Woman movie is something you are definitely not doing, correct?

Well, I'm not doing it now. But maybe in the future.

You're great at fueling the rumor mill. But as you've taken on bigger projects, do you have to play it close to the vest, or can you speak about upcoming films without worrying about how it might affect an actual future production?

Yeah, because—well, here's how I look at it. If no one gives me things, I'll just make up my own movie. And nobody gave me superhero movies, so I made one out of Drive. Hopefully I'll get to do Wonder Woman, but if they won't give it to me, then I'll do my own Wonder Woman. I'll just call it something else. Super Wonder Woman! And yes, my ideal choice is Christina Hendricks. I certainly can't think of a better version, and I don't think anybody else can.