close
OPINION: A working mom can try to do it all—but she needs to know who she's doing it for

EXPERT OPINION: Taking Issue With 'How She Does It'

on September 21, 2011 by by Caroline Frost, as told to Boxoffice
Print 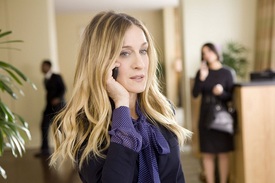 When I'm being positive—and generous—to Sarah Jessica Parker's stressed-out mom, wife and businesswoman in I Don't Know How She Does It, I think the message is, "Embrace imperfection." And that's a message that I can get behind because we are perfect in our imperfection. The sooner we get that message, the sooner we can accept what is and love ourselves, whether we're making six figures or a tuna casserole for dinner—or both.

But when I'm thinking critically, I think about her two poor children, a kindergarten girl and a toddler boy, who are constantly being rewounded by the stress between the parents, the broken promises, the multiple abandonments. Abandonment happens as a matter of course: all parents leave at some point. Most parents probably have to go to work, and most kids probably have anxiety about that and fear that one day mommy or daddy will never come back. That's nothing new. But the way they set it up in the movie, I don't think they really give dignity to the children's experience. I don't think they do justice to the position of being abandoned over and over.

The son, who is two, has very little discretion and makes it easy on mom. He's always happy to see her. But I take umbrage with the way Jessica Parker's Kate characterizes her daughter as punishing. She takes the victim stance—we're meant to pity Kate when her daughter Emma gives her the cold shoulder for going on out-of-town business trips. And the movie is firmly on Kate's side. But underneath the daughter's rejection of mom is pain, and I don't think Kate is sensitive to this. She just acts hurt, or distracts her daughter by doling out bribes, which glosses over the fact that Emma has real feelings that aren't getting acknowledged by mom. And what's worse, Mom is personalizing Emma's pain as a rejection of her, she gives her daughter so much power and control that she doesn't have—really Emma is just erecting a defense to protect herself from being left again. Left untreated, this girl could have some serious abandonment fears as an adult.

The portrayal of the "Momsters," the stay-at-home moms that Kate imagines hate her, is really curious. We see them as uniformly conceited, lazy, entitled, and deeply unhappy people who project their self-loathing onto working moms. This is another way I think Kate takes the victim stance. It's a cheap shot, and I think it's unnecessary. Wendy Best (Busy Phillips), the mom we always see on an elliptical machine, is an easy laugh, but it's really not very funny. Stay at home moms have an awesome responsibility. These women often have to choose one or the other—they can't do both. Not everyone can—or should—be jugglers, as Kate describes herself. I think it's dangerous territory when we begin to judge women for the choices they make around career and childcare, and it reeks of an internalized sexism—women hating women because we learned it was safer than hating men. I might be taking a leap here, but I don't think I'm completely off base. And the film uses a documentary-style camera that interviews the Momsters during almost all of their scenes, like it's saying, "This is the truth—it's not just Kate's paranoid perception." Think about it: why does the movie want us to hate Wendy Best and kind of love Jack Abelhammer (Pierce Brosnan), even though the guy is essentially trying to seduce a married mother of two?

I want to talk about Olivia Munn's Momo, Kate's perfectly groomed, kinda robotic assistant who thinks her boss is a mess and can't imagine dealing with having kids. She literally wrinkles her nose when Kate asks her to hold a Tupperware full of Cheerios. (Curiously, though, her name contains "Mom.") I get the feeling Momo is either Aspberger's or deeply wounded and neglected. And earlier in the film, Momo is very clear about not wanting children in any way, and I wanted to say, "Hey, good for you. Excellent choice. Way to know thyself." I think it is wise to treat parenthood with gravity and awe. Ambivalence is normal, and yes, women experience a surge of bonding hormones when they give birth that may assuage a new mom's worries, but Momo was crystal clear—she patently rejected the idea of motherhood. But, spoiler alert, she ends up pregnant and is of course immediately thinking about abortion when Kate tries to convince her of how magical motherhood can be. I found that really disturbing. Just because she has a uterus doesn't mean she truly wants to be—or should be—a mother. Her perfectionism and discomfort with physical contact will undoubtedly resurface and leave a lasting mark on her son. That moment was just way too cavalier to consider the new life who will be raised with her as a mom.

I wish the movie had given more attention to the marriage between Kate and Richard (Greg Kinnear), who are barely talking and definitely not having much sex. It's interesting that Richard has kind of the stereotypical female role in their relationship. He wants to make dates just to talk and have normal conversations. She's always late for dinner and skipping out of town when things get too intense.

The foundation of a solid family begins with the parents. Family dysfunction begins with the parental dyad. If the marriage isn't right, the children will know it, and they will absorb that unrest. When mom and dad don't deal with each other directly, they begin triangling the kids to take the pressure off their marriage. It's like when mom and dad aren't having sex because mom is a workaholic and dad is taking a passive role, and all of a sudden they become obsessed with how their youngest daughter isn't at the top of her class. Ignoring their problems only makes them bigger, and the children shoulder the brunt of the impact." This is madness for the children—it's stressful enough to have your own problems without someone projecting their own crap onto you.

Their family would definitely benefit from some group counseling so that the children have a safe space to talk about their feelings of abandonment and that Kate is prodded to tell them about why she chooses to leave—deep down, it's partially because she wants to take care of them, and they need to hear that. This family needs to communicate directly. The next step would be couples therapy just for Kate and Richard, again because she needs to slow down, check in and stay honest. And she deserves a chance for him to listen to her instead of walling off his own emotions as he seems to do when he feels like he's been rejected too many times.

It's a shame the movie didn't delve deeper into Kate's history to get to the root of where her need for perfectionism comes from. That's where I'd want to start if she came into my office for a solo visit. We get a poignant glimpse when, explaining her semi-homemade cherry pie attempt for the school bake sale, we see that her mom was probably absent or disinterested. Her own mother didn't bake a pie for the bakesale—she sent young Kate off with two cans of peaches. And negligent mothers often breed codependent daughters. You can see the codependence even in the way Kate talks—when she's not apologizing to someone, which is always, she's thanking them. Her overwhelming thank yous even become a plot point—it's that obvious.

Kate adores her children, and there's no doubt about that. I think her love of the kids is one of the redeeming qualities of this movie. I really connected to the scene when Kate realizes that her son got his first haircut while she was at work. That that moment was stolen from her sort of carelessly by the babysitter, and she weeps as she walks away. They flipped it as a comedic moment, but I really felt sad for her, and I felt sad for that sacrifice. There are so many firsts and only experiences in childhood, and they do grow up so fast. Missing those milestones is a painful tradeoff for working parents and the movie acknowledged that well.

Kate's main flaw is in trying to be everything to everyone and not being honest with herself and others about her limitations. I think that's the vanity of what she's attempting to do. It's not wrong for her to be ambitious—but if she wants the career and the family, she needs to get acquainted with her boundaries at home and at work. Codependence gets encouraged by others because it looks good—"She's so available, she's always there when I need her"—but in the end, it lets people down because she's not taking care of herself. And that leads to resentment and chaos and acting out. She finally gets it at the end when she tells her boss she's not going out of town that night because she has to make a snowman. "No!" is going to be the best word in her vocabulary. Saying no is anxiety provoking for codependents at first because it represents missed opportunities or letting people down. But it's infrastructure. Saying no creates the conditions of a sane lifestyle. And her children and husband will thank her for that.

At the end of the movie, someone asks Richard what Kate does, and Kinnear gets this glossy look on his face and says, "She's a juggler." I was trying to decide if that was an okay last line of the movie for me. It really isn't, because if you're juggling, you're throwing things up in the air, and nothing's in your hands for very long-you're constantly moving and not taking care of any one object. You're tossing things around and praying they don't fall on the floor. You can't juggle forever. Eventually you have to stop or drop something. And juggling is clownlike—it's for other people's entertainment, not for yourself. You might get applause, but it's fraught and exhausting.

Caroline Frost, MFT, is a licensed Marriage Family Therapist and specializes in intimacy disorders like sex and love addiction and relationship dysfunction. She sees individuals and couples in private practice in the Beverly Hills/West Hollywood area. She also specializes in treating creative populations.

For a free phone consultation, call 323-839-3707, or email carolinefrost@mac.com. For more info, visit www.carolinefrost.com or follow @LoveWellTherapy on Twitter.

Tags: expert opinion, I Don't Know How She Does It, Caroline Frost
Print