How 'Moneyball' Could Change Your Life

on September 20, 2011 by Daniel Berkowitz
Print 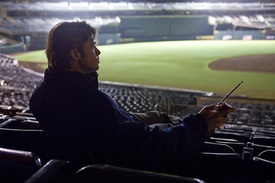 Moneyball is a system of evaluating baseball players developed principally by Oakland A's General Manager Billy Beane in the early 2000s as a response to the enormous gap in team payrolls: some wealthy teams could spend upwards of $100 million to hire their star players, but the A's maxed out at around $40 million.

Before Beane's brainstorm, managers competed to buy players who best matched baseball's traditional statistics (homeruns, stolen bases, batting average) and dated forms of physical evaluation (how muscular a player looks, how fast they run). Instead, Beane sifted the statistics for tiny, unnoticed, but telling details—rather than look at how often a player gets hits, moneyball looks at how often he gets on base. He saw value where other teams saw only a second-tier athlete.

You probably don't work for a professional baseball team. You might not even be able to throw a baseball. But the principles of moneyball can still be put to work for you with the power of measurable, controllable choices that dodge the obvious. Here are six tips to implement off-kilter, statistical evaluation into making better decisions in your social life: