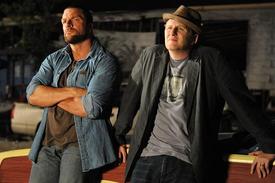 Do you feel as a performer you could reach a larger audience, perhaps one that isn't as familiar with Triple H or the WWE product by staring in action films where you can show off you natural athletic ability and your larger than life persona more than in a slow-paced drama?

Listen, I think a large fan base would love an action film, but at the same point in time I'm not going out to be this big Hollywood actor and make a career of it. They came to me with a movie, I read the script I thought this is a really interesting script I dig it. They came to me with Chaperone and I thought, hey that's a really fun family film I enjoyed the script so I did it. If someone came to be tomorrow with a great action script and I like it I'd do it, if it fit in my schedule. It's not the be all end all to me. It's not my goal to be a big action star, I have done some movies in the past I had a blast and hopefully people enjoy them.

Do you feel working with Bruce Dern and Michael Rappaport brought out the best in you as an actor having to rise to their level every day?

Yea, definitely. I read the script and one of the things that intrigued me about this film was the chance to get to work with Michael Rappaport, Bruce Dern, Parker Posey, Julie White, Michael Cudlitz, these are all very very good actors. I mean Bruce Dern is a legend, and it makes you rise up to their level, but it's also a form of protection. If you put enough great actors around you, you start to look decent yourself; you can hide your flaws a little bit. Listen, I in no means see myself as this great Shakespearian actor and I'm not gonna win an Oscar for anything but I do think I do an okay job and If I have great people around me I can make a good picture that people will enjoy.

When WWE films first started they came out with hard hitting films such as See No Evil and The Marine, which appealed to a target demographic and hit that well. As the WWE wrestling program shifted gears throughout the years to a more family- friendly environment their movies seemed to have followed. Now with Inside Out they seem to be targeting a more adult demographic. At the same time the on air programing of WWE seems to be slowly shifting gears again to a more adult-oriented program—not as much as it was in the past but a little more than it has been. Do you feel WWE films releases their movies based on the demographic the wrestling program is trying to reach, and if so does it hinder the expansion of potential new viewers outside of the WWE Universe?

I think a lot of it is honestly coincidence. I shot this movie over a year ago before we were anywhere near our changing programing, I wouldn't actually say we changed our programming. We have pushed the envelope so far years ago to an extreme that you almost had to sterilize the product. So when CM Punk can go on TV and say the word "ass" and everyone would go, "oh my god." It's not necessarily that one follows the other but I will say that when the creative mind is set in the PG environment you start to read scripts and formulate scripts in the PG mind frame, it's just where you're at. We have films coming up on our slate now that are R-rated films, it's just the way it happened.

Now with WWE rebranding itself then more than just a wrestling program it seems with every film a bigger and bigger co-star signs on, now you have such actors as Bruce Dern, Ed Harris, Michael Rapport staring in WWE films. Where do you see WWE films in the future?

At the heart of what we do is the wrestling. You have to look at it as two separate things; you have WWE the wrestling product, with the superstars and our intellectual property. Then there is WWE the company. WWE the company is a marketing juggernaut, television production facility, a movie studio, soon to be a network. It's a lot of different things that's the business of what we do. Some of those businesses can translate to each other, like with the Ed Harris movie That's What I Am, Randy Orton was in that for like a minute, it didn't have much to do with the WWE. It's not necessarily reaching out to our WWE fan base it's a totally different thing. We are trying to create a viable film studio and that's going to take a long time to do. If WWE wasn't the name on it and we didn't get the attention we get because we are the WWE I don't think people would criticize us as much. But because we are the WWE people look at every individual product we do under a microscope. Really, what we are trying to do is create a great slate of films. We have some action films, a couple of comedies, some family friendly films, the That's What I Am film which is a big moral film, we have Inside Out which is completely different, a horror film coming out called No One Lives. We have a lot of different types of films, and that's our goal, to create a slate so that over the long term people are seeing the good results of what we do. When we were first starting the business out we couldn't get any named actors, or named directors, now we get great scripts, great actors, such as Harris, Dern, Rapport, bigger and better actors, bigger and better directors, bigger and better scripts. Slowly as time goes on and we create better and better products people start to see us as a viable studio. They don't just go, "Oh, the WWE wrestling guys are making a movie." Its "WWE films are making a movie." It's no different than with Marvel. People don't go, "Oh, the comic book guys are making a movie." It's Marvel Films is making a movie.