close
INTERVIEW: Talks the challenges of approaching a role, staying invested, and Hitchcock's theory of plausibility

"It's Invigorating": 'Abduction' Star Alfred Molina on Working With Taylor Lautner and a Younger Generation 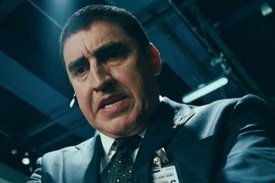 Alfred Molina had a literally killer Hollywood debut. His first big screen appearance was the opening scene of Raiders of the Lost Ark where he played Satipo, Indy's double-crossing guide, who has only a minute of triumph before he's fatally stabbed with spears. From there, Molina's made his career playing smart swindlers, bad husbands and memorable villains like Spider-Man 2's Doc Ock. He's never a thug-he's a man with a plan. And in Abduction, his Agent Frank is a shifty protector that you can't quite trust. Is he sheltering Taylor Lautner's teen-on-the-run, or tucking him away for his own purposes? In this candid interview, Molina tells Boxoffice about his impressions of this latest crop of young actors and the struggle to find his creative spark after three decades in the business.

What drew you to this script?

I like the story, first off. I'm a bit of a sucker for CIA, spy, espionage-y, suspense stories. And I've never quite played this kind of character before. The fact that he starts off, you think, as a good guy, then becomes slightly dubious, slightly questionable. It just struck me as a really good story—a good yarn, a good rollicking yarn. And then, added to that, I've never worked with John Singleton before. It's always interesting to work with a new director. And working with a new generation of actors. So all of that was all grist for the mill, you know. And the money didn't hurt, either. [Laughs]

Your Agent Frank clearly has a sinister edge, but it has to be presented with a degree of moral clarity.

Far be it for me to presume that I pulled it off successfully, but I think the only thing you can do is to really just serve the story and what's required rather than try and second guess the audience or direct them—or misdirect them, as the case may be. I think if the writing and the structure of the story is such that that will happen—and I think it does in our show—then you just serve what's required. So if they require you to be angry at so and so and quiet at someone else, then you just fulfill that without worrying about, "Oh, if he shouts, that means he's the bad guy." You know, you've got to balance what's going on with what the story requires and hopefully what the audience requires, as well. And I think that brings us into the whole notion of what's real and what's not real. And I always think that our only responsibility is not to be real. It's to be authentic, and to be authentic enough to allow the audience to feel comfortable in suspending their disbelief. Which ultimately is all we do. I think there's a level at which you can over-think the story and over-think how the audience are responding to you. All you can do is just be honest to the story.

How important is realism? I mean, your character clearly has some guile and strategy to him, and yet in one scene he has Taylor Lautner, who obviously people are after, sitting in front of a big plate-glass picture window where he could get picked off.

Well, I think you have to be plausible. But at the same time, you can't be so realistic as to be pedantic. Alfred Hitchcock used to talk about Mr. and Mrs. Plausible, the Plausibles. And what he meant by that were people in the audience who would automatically say, "Oh, that would never happen. Well, how can that be? That would never happen." And of course, if you absolutely scrutinize any movie you've ever seen—great classics or even the mediocre—you can scrutinize those films and there will be endless examples where things are implausible. But that's the nature of fiction. Fiction and storytelling isn't about fulfilling a series of plausibilities. It's about making the implausible, making the unlikely, making the undesirable, making the scary or the frightening, entertaining. Now, that scene in the diner where we're all sitting in front of the window: I thought that was plausible only because my character believed that he had the area cordoned off. He had guys positioned out there, stationed out there. Then you see those guys being picked off. And that's what creates the drama. You kinda go, "Oh, my God. They're not as safe as they thought they were." So that's kind of dealt with in the structure of the plotting. If the actor's concerned about the plausibility of the situation, then the script isn't working. But I think our script was finished enough and coherent to the point where we were able to relax about that.

But we hear about actors going through the process of creating a back story and this motivation. Is what you do equally difficult in a different way?

Yeah, basically. I mean, different people have different ways of getting there. We all make the same journey. We just have different routes. That's all. Some routes are more complex, have more distractions or more detours than others. Our intention, the end result, is hopefully the same: which is to be as plausible or as authentic as you can be. How we get there is really up to the individual. But I always talk in simple terms because I think that's the nature of the job. I think it is simple. But that doesn't mean it's easy. It's simple in the sense that what you have to achieve is pretty clear. I always think of it in terms of looking up a glacier. The surface looks incredibly smooth and it's all one way. "Yeah, that easy. I can do that." But as you get closer to it, you realize there are rocks and ravines and crevices. That's the craft: dealing with all of that. I try not to overcomplicate it by using highfalutin language about it—but I'm concerned as much with back story and motivation as anybody else. We all just have different ways of getting there.

What inspiration do you get from working with not just younger actors but younger filmmakers? Like Paul Thomas Anderson—

I was just about to use him as an example. It's invigorating. There's no two ways about it. You expose yourself to new generations of filmmakers, actors, directors, writers, producers, and you get something very different from each one. Because each generation is, in a sense, a product of their prevailing circumstances. And so I love it. I find it challenging. I find it inspiring, working with say, Taylor and Lily, for example—certainly with Taylor, I realized his hunger, his ambition, his desire, his enthusiasm for the job at hand was precisely what mine was when I was that age. And I was delighted to see it because it's very easy to fall into the notion that all the young kids want to go to parties and have fun. But the truth is, when it comes to the work, they're as committed, as serious, as focused as any other generation was. With the added thing that given the prevailing circumstances of the industry, they seem so much more sophisticated and knowledgeable than I would have been. When I was his age, I didn't have a clue how the industry worked. But someone like Taylor has a good understanding of what's required of him in terms of what he's got to do, the steps he has to take to achieve what he wants. And that's laudable. It's admirable.

You've been doing this for so long, do you still feel the same creative spark?

No, you don't always get as excited by each job. It would be disingenuous to try and pretend that. But the circumstances might be different: one job might be more exciting than another in terms of who you're working with, where you're doing it. One job might have a great location. I'm gonna spend three months in some exciting place that I've never been to before. Or it might be you've got a gig where you're gonna spend two months shooting in some boring suburb. Those things change, and of course one thing might be more exciting than the other. But when it comes to the actual moment of work, the moment when you hear "Action" and the actor is there in front of the camera doing the work, that moment is always the same. For me, anyway. That sense of excitement, that sense of anticipation, the fear, the desire to make this the one that counts, is always the same. Your circumstances might change, but I hope, I think I get just as excited as I did years ago. I think the only difference is that now I feel a little bit more comfortable—not comfortable, more confident—about how to handle things if things go wrong. There was a time in my life when if there was a technical problem in the scene-like say, for instance, the scene requires me to hand this over to you—if something happened that I couldn't do that, I would suddenly go, "Oh, sorry! Sorry!" And I'd break the moment because I was terrified that I didn't know what to do. But now, of course I'd work something out. I'd move this or move that or put it somewhere different and make sure that you understood why. You become better at the craft. But the excitement is just the same.