close
INTERVIEW: As well as the tricks in making a sympathetic Holocaust movie

John Madden on Shifting Release Dates, Luck in Casting, and 'The Debt' 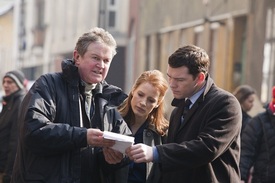 John Madden likes a lot of things, but he doesn't much like the present. His films—a list that includes Shakespeare in Love, Captain Corelli's Mandolin and Her Majesty, Mrs. Brown—are most content when digging up the past. Slowly, with psychodramas like the mathematical Proof and the hitman thriller Killshot, he's slunk into his own era. But Madden must be happy that his latest, The Debt, splits the difference. The Debt is a time-leaping and tense drama about three spies—played in their youth as Sam Worthington, Jessica Chastain and Marton Csokas, and in their cynical maturity by Ciaran Hinds, Helen Mirren and Tom Wilkinson—who set out to capture a Nazi war criminal (now posing as a kindly gynecologist) and wind up derailing their entire lives. Poised to come out last December at the height of awards season, it was held back when its studio, Miramax, collapsed. "Strange to be talking about a movie that I haven't seen for a year," joked Madden when he sat down for our interview. But his recall hasn't faltered when speaking of the pressures he felt when founding a movie on the trauma of the Holocaust—and of the way he used those pressures to put the audience through their own emotional and moral grinder.

This is a remake of the Israeli thriller Ha-Hov. Why remake it and what did you decide to change from the original?

First of all, it's just a really good story. Number two, it's about very, very weighty, powerful subject matter. And number three—and this is crucial, really—it's a film where you can't unravel the physiological complexities of what's going on from the characters, and therefore, you have a chance to make a film that we haven't seen for some time where the film is both an emotional and physiological drama—and a moral drama—and a very good genre thriller. Well, I don't know about very good, that's for other people to say. But in script terms, it had the potential to be one. When Matthew [Vaughn, director of X-Men: First Class and Kick-Ass] and Jane [Goldman, writer of X-Men: First Class and Kick-Ass] came to me with the script, Matthew was thinking of directing it himself and it would have been a different kind of movie. I was responding initially to them and then part of the process was seeing the original movie. It was an entirely positive process, not one where I thought, "How am I going to avoid all of that?" Miramax was interested in making a thriller because there was a commercial attraction there. It was a given that the story would expand slightly as it has done. The attempt to get the Doctor out of East Berlin was not part of the original movie at all. But more much significantly, this movie—and this is where I have to be careful—is much more concerned with the parenthesis around the inner story. In other words, how the characters' lives are affected by, contaminated by, unravel as a result of what's happened. The original film was more about unfinished business. The guy got away, now what do we do. And that's not a bad choice—it's just its original preoccupation. There are several significant shifts in the story, notably the introduction of the character of the daughter, who was not in the original film at all. That completely changed the psychological underpinnings of the story in a significant way because that daughter turns out to be not just another character, but to be entirely central to the story, which is all about gynecology and enabling people to give birth.

For this film, you cast Sam Worthington before Avatar and you cast Jessica Chastain long before The Help and Tree of Life. You even put Joseph Fiennes on the map with Shakespeare in Love. Why this emphasis—or this luck—for discovering unknowns?

The answer is very simple. I don't set out to do it as a working method, as in, "I have to find the guy that I can break who will then become a star!" It's just looking for the best possible casting you can get. I did start off with a bias in this that I thought it would be not necessarily helpful to have two stars playing the same character—that felt as if it wouldn't be an equation that would help the film, it would actually impede the film or insert an agenda that the film wouldn't benefit from. That led me to the position of wanting to cast someone who had negative—as in, no—baggage, an argument I also used for the casting of Doctor Vogel (Jesper Christensen) because that role could have easily become an acting grandstand. I felt that would inauthenticate the film. So I simply started out trying to find the best person. Sam was a known quantity only from this movie I'd seen him in, and so I began to tune in on him. I didn't find the studios digging in their heels because he was going to be coming out in Avatar in six months time before the movie was likely to be released. I think one of the director's most important jobs is to cast the movie really, really accurately. To be very alert to what the part needs and therefore what actor that part belongs to. Joseph Gordon-Levitt is another example. For Killshot, I really fought for him and he was not well known at that point. Joseph Fiennes was exactly the same. Miramax was interested in virtually every actor under the sun who was hot at that moment, but obviously the parameters were much easier to define. I would like to take credit for it, but you don't have to be a genius to see talent in front of you. Particularly when you see the material come alive.

Let's talk about Doctor Vogel. When we meet him in the '60s, he's a nice, reasonable man. But obviously through flashbacks, we see things that make him the personification of evil. How did you juggle that balance between making him human and looking flatly at what crimes he had done?

The problem with the Holocaust is that it's very difficult to unravel the magnitude of the monstrosity and the corruption of human behavior and morality. It's so overwhelming that it almost forbids three-dimensionality. It's very, very hard to convey that in a way that's plausible. It can be done. Ralph Fiennes' performance in the Spielberg movie [Schindler's List] went a long way towards accomplishing that. I spoke to the actors and said, "There are certain assumptions we have to put behind us. This is a man who has somehow found a way of living with himself even though the world has condemned his actions and behavior." One of the interesting things of doing a film about someone like him is you discover all the contraptions someone has built in their head to make sense of what they've done. Another things is that his behavior in the safe house is obviously the behavior of someone who will do anything to survive. In that context, it's manipulation, but most of what he's doing in this movie is fighting for his life. That seemed to me to be a way of settling those issues because one of the arguments you're working through in the film is have they got the right guy? The audience is supposed to make up its mind about that, and that's an important part of what's going on. You're introduced to him in the guise of a person you're instinctively willing to trust—a doctor you're willing to open your legs in front of. Certainly once he is tethered to a radiator and force-fed, your reactions become quite complex because you instinctively as an audience empathize with a victim or an underdog. I took all of this quite seriously because the last thing I wanted to do was just bolt-on a story to an immensely, dauntingly, gigantic moral issue and just bend that into whatever way it serviced the story. Obviously, I can only hope that I got that right.

Both The Debt and your last film, Killshot, were moved around on the release calendar. Has that affected your career plans?

I think I've learned that you never can—and never should—rely on when a movie is going to come out because that's a shifting idea. The last movie that came out when I expected it would was Shakespeare in Love, which was very helpful to me because there was a target we were moving towards so the movie had to be shut down on time and I was grateful for that. But creative momentum is only important up to the point where you lock the movie and deliver it. It's frustrating after that. The frustration of Killshot was of a different magnitude because that film never really got a release. That was very upsetting in a different way, though as time goes on that movie will be there and people will see it because of Mickey [Rourke] and Diane [Lane] and Joseph Gordon-Levitt, who is now a big star just as he was always going to be. It can be found again. It only matters to me that Elmore [Leonard] was happy with it and I was happy with it. The rest is fine. But in the case of this movie, it's landed in a much, much better place. If Miramax had distributed it—if Miramax was still around—we'd have been fine. But Miramax didn't exist very soon after we finished it and I think Universal and Focus is a much better place to be than Disney which really wasn't equipped in the right way to distribute this film.

They always said that the best way to find a job is to have a job. Have you found that the industry understands the reason for the delays between your films, or do they think you've just been inactive?

I haven't found that, luckily. I've made another movie since I've finished The Debt, so I'm in a nice position. Of course it's true that, famously, you're only as good as your last movie—and if your last movie hasn't come out, I don't know what you're as good as! You worry about that, but in fact it hasn't proved problematic, though I imagine it could have done. There is a problem that certainly happens with the perception of a movie, which is that if a movie is perceived as being endlessly in post-production—which may have nothing to do with the circumstance, in the case of this film, this film was locked within three months of my starting to edit it—you do have to push back certain assumptions that are made about it. In the case of Killshot, it was very difficult for us to recover from that perception, particularly because of Harvey Weinstein who released—or didn't release—the man is famous for invading films and playing around with them. The movie was my movie in the end. That's annoying, but you're sort of at the mercy of the gods once you've finished a film.