close
OPINION: It's man vs. wolf in this testosterone standoff 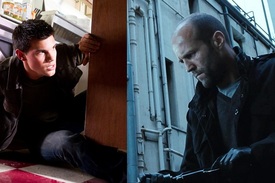 It's an unfair matchup, you might argue. One's a barely legal, baby-faced teenager while the other's an ex-Olympic diver-turned-no-nonsense-action star. But this weekend, Taylor Lautner—emboldened by his Twilight success—dares to carry his movie Abduction solo while for Killer Elite, Jason Statham leans on his A-list co-stars Robert De Niro and Clive Owen. Which of the two headliners will reign supreme? We're pitting the upstart Lautner against veteran Statham in a macho match to rank them on six categories of action hero might.

Box office muscle: Lautner's films have banked over $800 million domestically, thanks almost entirely to Twilight. But the star is unproven outside of the franchise, whereas Statham has carried two dozen modest $30 million successes like The Transporter and The Bank Job.
Verdict: Lautner wins, but only on a technicality.

Hair: Lautner has a mane of luscious, thick black hair, but a balding pate like Statham's is indicative of very high levels of testosterone. (Think Bruce Willis.) When asked about his sex appeal, Statham once swaggered, "Must be the bald head."
Verdict: Statham in a photo finish after Lautner gets points deducted for his heinous Twilight wig.

Bank account: For his first topliner role, Lautner got an eye-popping $7.5 million for Abduction while it took Statham seven films to earn just $750K for The Transporter. By Crank 2, Statham's salary was up to $5 million, but it's been a slow climb.
Verdict: A knockout for Lautner, but with great money comes great responsibility—a big failure can bump his price down fast.

Abs: Lautner's new and improved washboard stomach got him a spot on Access Hollywood's "Top 5 Hollywood Abs." The muscle he packed on for New Moon made him famous, but Statham's been ripped since his diving days two decades ago.
Verdict: A tough call. We'll give this to Statham because, hey, it's not easy maintaining a six-pack when you're 44.

Real-life ass kicking ability: Lautner is actually a five-time martial arts world champion (YouTube "Taylor Lautner Martial Arts" to see some impressive flips and roundhouse kicks), but Statham's no slouch either with his training in jujitsu and kickboxing.
Verdict: Lautner. Real life thugs will be caught offguard when the baby-faced boy kicks their asses.

Arm Candy: Shallow, we know, but if you think Lautner and co-star Lily Collins share sizzling chemistry in Abduction, the young twosome also found love off the movie set. Meanwhile, Jason Statham is shacked up with Transformers 3 babe Rosie Huntington-Whiteley.
Verdict: Cute as Collins is, the impossibly stunning Huntington-Whiteley gives Statham the edge.