close
INTERVIEW: Discusses his career, his love for Man on Fire, Sharkboy and Lavagirl, and yes, Breaking Dawn 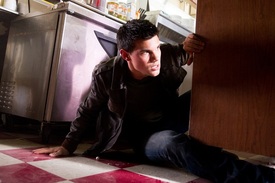 When you're a 19-year-old Michigan boy best-known for taking off your shirt, a roomful of journalists sees you at live bait. Taylor Lautner, aka Twilight's hirsuite hunk, knows it's time for him to prove his worth to Hollywood. Step one: star in your own action movie. With Abduction, a baby Jason Bourne thriller about a teen tracked by men with guns, Lautner's about to check off the first on the list. But first, he has to charm this outspoken mob of interviewers who fire off perilous questions about his comparisons to Tom Cruise, making out with real-life girlfriend Lily Collins on the Abduction set, and if he knows that Brad Pitt only recognizes him from the 2005 kiddie flick The Adventures of Sharkboy and Lavagirl in 3D. If Lautner can act cool under this much pressure, the kid might become famous after all.

Do you feel like you were destined to be famous?

I definitely don't feel that way because I wasn't expecting it at all. It kind of all came really quickly and it took a while to soak in and I still don't fully understand it or understand why it happened. So, I'm still a little confused, but I'm happy and not complaining. It happened and I'm sitting here today and I'm the most thankful guy on this planet. I'm having the time of my life.

Most young people get pigeonholed into a certain role. You have Twilight and this. Would you be interested in doing other action films?

I know you were gung-ho about doing the action scenes, but once you started the work did you ever think, "What did I get myself into?"

No. The only time that I ever had that thought cross my mind was when I did the giant slide on the glass in the baseball stadium. I was so excited about that stunt and was so thrilled that they were allowing me to do it. But after, and I'm being honest, about 15 or 20 takes I was like, "All right. Where's the stunt double?" It was fun for a while, but then you get a few bumps and bruises. That's about it.

What was the funnest scene you did in the movie in terms of action?

The funnest was probably the opening of the movie where I'm riding on the hood of the trunk, flying down the road. That one took some negotiating from me to allow them to let me do that. At first they were like, "No. That's not happening. You are not getting on the hood of that truck." Somehow I convinced them to allow me to do it, but then they were like, "OK. But you're only going 20 miles an hour." I was like, "Come on, people. Haven't you ever heard of Method acting? I need to be able to relate to the adrenaline that this character is experiencing." So, we got up to about 50, 55 which was not quite the eighty on the speedometer, but it was fast.

What's the working relationship like between you and your father, who's a producer on the film?

He's simply there to help me because I'm really busy. For instance, in the past year I've only been home for five weeks. So, when I'm on set and I have no time to think about anything except the character that I'm living at that moment, he helps me out with that.

You and Lily Collins have this scene on the train-

How was that? Was that a negotiation?

There was no negotiation needed there. [Laughs]

But you had to be reminded that it was a PG-13 film, right?

Yes. That's why the cut off or the little, "I'm getting hungry," excuse right before. It was great. We went for it, and sometimes those scenes can be awkward. It just depends, but thankfully it was all good.

How does it feel to finally get the girl?

What was the thing that sparked your interest in martial arts when you were a kid back in Michigan? Was it seeing a movie?

Honestly, I just gave everything a shot right away. When I was 6 years old, I just loved being active and I loved sports. I said, "All right, I want to enroll in as many sports as possible." So, I gave everything a shot from football, baseball, basketball, soccer, karate, swimming. It was insane. Then as I got older I started narrowing it down to the things that I was most passionate about. It ended up coming down to football and martial arts. What I think I ended up liking about it the most was the competitiveness, but then probably the life lessons that it teaches you. Martial arts has been really important to me and the lessons that it's taught me, from hard work and self-discipline, all of that stuff. That's probably the biggest thing that I got from it.

Do you have an eye for it when you see films, like, saying, "That guy can't really do that?"

A little bit, but they do a pretty good job of faking that stuff in movies nowadays. [Laughs]

The movie that I have watched a million times, and if I meet somebody that I has not seen it I force them to sit down and watch it—I don't know why I'm so obsessed with it—Man on Fire with Denzel Washington and Dakota Fanning. It's so good. It's very brutal, and like, weird, but I think that Dakota is amazing in it and he's so cool in it.

Did you tell Dakota about Man on Fire?

I think I played it cool.

How old is she?

She's younger than me, yeah.

What are your thoughts on hearing people saying that you're the next Tom Cruise?

It's a little intimidating. I mean, Tom Cruise is probably number one on my list and always has been. I've looked up to him since I was really young. I think the biggest reason that I've looked up to him is just his career choices. He's always continued to challenge himself and do different things, going from Risky Business to Top Gun to Jerry Maguire to Born on the 4th of July. The variety in those roles and genres is absolutely insane and that's what I admire about him the most. That's my goal. My goal is to be able to challenge myself like he did. If I end up with a tenth of the career that that guy's had I would be completely happy.

Have you met him?

I have met him. The first time I met him he was in his Les Grossman outfit because we filmed this thing for the opening of the MTV Movie Awards two years ago. So, it was kind of weird for me to meet my idol, Tom Cruise, and he's in this giant fat suit and he's bald. That was kind of weird, but then I met him a couple of times after that.

Is that a role that you'd do in the future?

Les Grossman? My version of Les? Yeah. I'm always, like, I had the time of my life with 'SNL' where I got to dress up as a girl and dress up as this foreign blonde pop star, playing these weird roles like he did with that. I have a lot of fun doing that. So, I'd definitely be open to that.

What's your relationship to the Twilight franchise going to be like after it's all over? It took Harrison Ford 30 years to start talking about Han Solo again. Are you interested in setting it aside for a while?

Not really. I'm so close to that franchise and to that character and to everyone involved in it that it'll be so close to me for as long as I live. It was really emotionally finishing filming. It's sunk in, but then I don't really know if it has because when we finished filming before we'd be bummed, but we knew in another couple of months we'd just be back filming another one. This time around that wasn't the case. So, it was tough and it's definitely going to be tough to let go. Thankfully for the next year and half we'll be able to talk about it and promote it together, but when it's all said and done it'll be really weird.

How has an experience like this rekindled your creativity or challenge you in a different way from Twilight so that you're recharged and maybe went back having learned something for the final two of those films?

This actually was perfect timing because I filmed this one right before I filmed the last two Breaking Dawns. This movie stretched me as an actor more than I'd ever been stretched before. It was perfect before in Breaking Dawn Part 1, specifically, my character, he gets so emotional and he changes so much. Now that was by far the most I've ever been stretched, and it was great to ease into it with Abduction right before that. So, this was a great experience and then leading into that. Breaking Dawn Part 1, I can't wait for everyone to see because you're going to see every one of the characters in a different light than you've ever seen them before. It was by far the most challenging experience that I've ever had as an actor.

Where do you see your life and career going in the future?

I hope that this new and exciting life professionally maintains and I just hope that a few years down the road that I'm doing this. Then what I've been so thankful for so far is to be able to have the same life that I've always had. I have this new one which is great, but I have the same life that I've always had before with my family and my friends. I do what I love to do and I'm kind of able to bounce back and forth which is really important to me.

Have you heard what Brad Pitt said about you in the most recent Entertainment Weekly?

No, what did he say?

He said that Sharkboy & Lavagirl is a fixture in his house—

He said, "I watch only kids movies and that's what we watch."

He didn't know anything about Twilight.