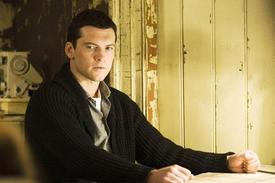 If you haven't seen Sam Worthington before, you haven't been to the movies—because he's in all of them. After James Cameron tapped the young Australian to star in Avatar, directors like McG and Louis Leterrier followed suit for their franchises, Terminator and Clash of the Titans, and he's since shown up in a variety of high-profile projects as precisely the kind of everyman who gives blockbuster heroes their humanity. In his latest film, The Debt, Worthington plays a Mossad agent assigned to capture a Nazi war criminal in 1960s Berlin. Boxoffice sat down with Worthington at the Los Angeles press day for The Debt, where he opened up about learning who he is through living different lives on screen.

David, your character in The Debt, is very introspective. How tough is it to play someone who's very internal, and yet give enough to the audience?

I think you have to just trust your director to gauge it. John saw a movie I did called Somersault, where the character was the same kind of thing—he kept a lot of his emotions inside and in check. David's a bit different than that because I think with David it's by choice that he keeps everything in and keeps everything private. I think when you're playing those types of roles, it is a fine line between being boring as batshit and revealing things slowly. And then you just gauge it with John on how much to bring out, and how much to pull back. But in order for Marton [Csokas] to be the extrovert and the politician, you have to have a character that is kind of the complete opposite.

Ciaran Hinds plays David when he's older. How did you two together map out who he was?

I think my map was more where does that character end up? So I have to start differently—and even though we're dropping into him when he's 28, he's had a life up ‘til then so you're halfway into his life and you have to map it that way. That's what me and Ciaran did, and I kind of said, "Here's where I reckon it changes"—and it's just gear changes. It's just the mechanics of breaking down a scene so you can sit with a fellow actor and go, "Okay, that means that what happened in those 30 years, where would you start it?" So they're not just cookie-cutter kind of ideas where it's "And then he ends up like that." It should be a bit more complicated than that because humans are complicated beings. So that's all I did with Ciaran, map out the mechanics of what I thought the journey was until he disappears, and then I gave it to him and he did probably the same thing.

How much did the single-setting location of your scenes in this film contribute to the film's claustrophobia, especially given the scale of movies you've done in the past?

Well, you're still going to different places. You're still going to 1966 East Berlin, so it's still another world. I think whether it's Pandora or a mythological kind of place, it's still another world that you're visiting, which I find interesting. The dynamic on paper reads as a thriller, but you can't play thrilling, so you have to kind of find a way in. What makes it thrilling is the struggle for these people to achieve their objectives. David just wants to complete his mission—that's what will sedate the demon—but along the way he connects with these other two people in the house: one on an emotional level, the other on a kind of older-brother, combative level. That's what keeps bringing the demons out, plus there's a monster in the house that keeps bringing the demons out. So that gives it the thrilling aspect because it's a ticking time bomb of whether or not these people can achieve their objective.

But did the self-containment of being on one set affect you at all?

It does because we got to shoot it in order, so you start off happy families and then after four weeks going to the same set every day with a bloke spewing porridge at you, you tend to want to get the hell out of there. So it does help—it parallels.

Do you tend to spend a lot of time on or off set internalizing what's going on with a character?

I think it just comes into your pores. I think with any kind of part you play, it's not you—it might seem similar and people might get an idea that Sam Worthington is this type of person because he only does these type of characters. But you're exploring different types of things within yourself at the time, and you're bringing aspects of yourself out, so it's always kind of in the fabric of your being.

So what then kind of person are you?

I'm still trying to figure that out, man. I don't know how old you are, but I'm 35 and still haven't got a f--king clue. You're still trying to figure out who you are and what your actions are and what your ideals are and what type of person you are. The great thing about acting is that you get to explore all different facets of that. Like I just played a dad [in Clash of the Titans 2, which is now in post-production]. Now, I don't have a son, but I got to explore the aspects of being fatherly in Clash. In something like The Debt, you're exploring the aspects of being so wound up by things that happen in your past that you're too scared to let your emotions come out, your true feelings come out. And when they do, they come out like a flood. So that kind of exploration is why I like doing the job. It's tough on people around you, but that's what keeps me coming back.

Do you have to strategize what you're doing next, juggling sequel opportunities with projects like The Debt?

No, I don't really strategize, and it's two things: if I want to go and see that movie, and if I want to go and film that movie? Because something like Clash 2 is five months of your life, and a movie like this is two months of your life, and I kind of lock in. I don't see my friends or anything like that and it's difficult, because they're paying you to do that: to give your all. I don't think it's a strategy as much as if you do the movies that you want to see, something will happen. There will be a formula that will come out of that.

How much have you found that you learn from the experience of exploring these different roles?

All of the time, man. I'm still an infant. I'm only just started. I've been in this career, what, eleven years? I've done—I've lost count how many movies? 30? This is my second career—I've already had a career in Australia. So I got lucky to have another one. And each day you still realize how much more you've got to learn. You work with people like Liam Neeson and you see how much more you've got to learn, and you talk to people like Helen Mirren and realize you're just at the beginning of the marathon.