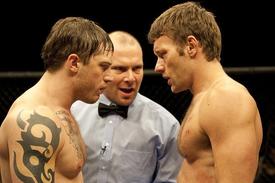 While doing press for Warrior, director Gavin O'Connor grumbled that the trailers gave away the whole plot of his brother-battles-brother movie—except for which brother wins. But the strength of Warrior is that even if you know where the blows are going to land, they still sting. And it's the same problem every sports film faces: c'mon, did you really think the basketball team in Hoosiers was going to lose in the first round? So how do you make a movie when everybody thinks they know what's going to happen? Says O'Connor, "It was scary."

Sports films have a familiar arc—how were you able to seed Warrior with its own unique substance and story?

Gosh. If you look at Miracle [his 2004 film about the winning U.S. Men's Olympic Hockey Team, starring Kurt Russell], the architecture of that story was driving towards The Game. And obviously, the challenge was that you already knew how it was going to end—that was very hard. There's nothing surprising that's going to happen. And then I made a movie called Pride and Glory [an NYPD drama with Edward Norton and Colin Farrell) that was very different, it was a great learning lesson just in regards to the narrative and learning what works with audiences. But there was a kitchen sink element to Pride and Glory, very inmate character stuff. Someone said this to me, and I think I wasn't even aware of it, but a friend of mine said that with Warrior, I took Pride and Glory and Miracle and gene-spliced them. I took the intimacy and the intensity of P&G and the scope and the emotional, inspirational event of Miracle, and I connected them both. So I guess I did that? I don't think I was operating that consciously while I was doing it. But I think in the art that you do, that just happens—and maybe it's just a part of my own artistic DNA? With Miracle, I was so f-king terrified, but I'd learned how to cover an audience and make sure I get it right. When you shoot an audience—and you see this a lot of times in movies, you just get generic—but I'd learned that there's a specificity to everything. The audience needs to be reacting exactly how they'd react to something that just happened, so it's all truthful en masse.

But the other thing that I was intentionally doing was I wanted the audience to be rooting for these two different entities until they have to fight each other. And usually that doesn't happen in movies—you know the star, you know who you're rooting for. In this movie, I wanted you to root for Brendan (Joel Edgerton) and root for Tommy (Tom Hardy). And you're still rooting for Brendan, and then you're still rooting for Tommy, and then you're still rooting for Brendan until: "Oh f-k." That movie, we've never had before. And then what I was going for was that the audience has to feel—and this is all unconscious because if they're thinking about it, then I didn't do my job-that there's a surprising yet inevitable finale to all this. And the feeling should be-hopefully—that [REDACTED]'s win is his win, and [REDACTED]'s loss is his win. That was the trick, because otherwise, it wouldn't have worked. It's an operatic kind of Greek, Shakespearean kind of thing I was going for. And it was scary. I kept saying to the studio, "I hope I can pull this part of it off."

Each brother fill ins what the other brother lacks—was that deliberately mapped out, or did it just happened intuitively?

There's a lot of intuitive stuff going on, but I think the intuitive stuff happens after you've written it. I try to operate intuitively in the making-of the film—the writing-of is a little more under a microscope. The architecture of it, the character arcs, the journeys, the emotions—that stuff has more of a science to it in the writing. Once I get there and I start doing my thing, I try not to look at the script anymore. I remember my script supervisor said, "You never f-king look at the script ever!" and I said, "Because I wrote it." I don't like to think about the script anymore. I don't wanna go, "Oh, it says that he's supposed to do this here," because I don't know what the f-k he's going to do. Let's just see what happens. Because then it becomes intuitive.

And then how does that translate into the fights because they feel real, but there's all this character motivation behind them?

First off, I story-boarded all the fights. It wasn't like we just shot—it was very specifically story-boarded. And also, what was crucial was—and this is what I'd always say to my Director of Photography—what's happening outside the cage is more important that what's happening inside the cage. It's the people who are there that are invested in what's happening that inform the audience watching. We just went with great care to film Frank [Frank Grillo, as Brendan's coach] in the corner and everything he says. We were really specific about it. I would roll three cameras on him, shooting him through bodies—he was so important to what was happening. When Tess is there, Jennifer [Morrison, who plays Brendan's wife] is amazing. She thought she was just showing up to sit in a chair, but we had her react to every beat of every fight. We got to a really genuine place because she was my go-to person. I kept cutting to her watching her husband because she was so f-king good. That's so genuine and so pure and so helpful.

You had to get through a lot of back story which ran the risk of feeling really explanatory.

Here's the best way I can explain that. Especially when you're doing a movie with 14 years of estrangement and a lot of the story is about what happened, you're dealing with the past. But sometimes you'll have one character explain it to the other when they both already know it. That feels really like exposition because why would they be saying that? We had a couple of those scenes. The hardest scene in the movie by far was the scene with Joel in the bank trying to save his house because it's all f-king exposition. On paper, I kept going, "Aw, this scene sucks, this scene sucks." So I cast and I get a day rate actor to do that scene—an actor who shows up, flies in that day to do the scene. And I said to my co-writer, "We're done—the movie's going to fail." We have a guy with no rehearsal who's going to come in and say lines that suck. I called up my friend Noah Emmerich, who's one of the best actors I know, and I said, "Dude, I have a really big favor for you. I need you to come in three days before I shoot this scene and let me workshop the scene with you. And the scene's not about you—you're there to serve Joel and his character. You're a little bit of a dick, we'll come up with a very specific point of view, but you're there entirely in the service of this guy...and you're going to get paid nothing. Will you do this for me?" And he said yes.

So Noah came in and we workshopped it Friday, Saturday, Sunday and we shot it on Monday. The scene evolved, the scene evolved, the scene evolved. We worked out a back story for the two of them: how many times they've met, what happened the other times they met, what happened to the economy, how are the housing prices? All that stuff we worked out and then when we did that scene, because Noah is great, he made that scene. I remember one time Joel came up to me after we cut and said, "I can't keep up with him. He's a freak because he's so good, he's so in the moment, and his brain is so fast." It illustrates beautifully that what could have been the worst scene in the movie—but had information that you had to have—turned into a scene that I'm really happy with. We almost get away with that exposition because of the emotional line between them and the tensions and the wants.

You have all these other fighters all competing for the grand prize—Koba, this undefeated Russian, and guys named Mad Dog and Midnight. But you've made them badasses without being bad guys. How did you strike that balance?

I would talk to the guy who played that character and then we'd figure out who this character was. The guy who played Midnight Le [Anthony Johnson], Brendan's first fight, we had a whole back story. He was born and then his mother left him on the doorstep of a guy named Chong Le. And he was this black kid raised by a Asian man—we had this whole back story laid out for him. He knew who he was. And then it was very simple: What is your intention in this fight? He says, "To win." I said, "Well, go beat him. You're a good guy who wants to win, and someone's going to win and someone's going to lose." It's an easy thing to do a white hat/black hat thing, but with Joel, it was about respect. When Joel beats him, he goes over and shakes his hand. Anthony's reaction was great. I was like, "Well, what would you be doing if you were in this fight and you really lost?" He was like, "I'd be bummed." I said, "Access this truthful reaction to losing—without acting, let's not act." So we did it a couple times to let them get comfortable and then a lot of times, I wouldn't even tell them the camera was rolling. I'd say, "Let's just rehearse it." Sometimes you catch the magic that way.