close
OPINION: WE OFFER A FEW ALTERNATIVES TO THE USUAL PARADE OF SEQUELS, REMAKES AND IDIOTIC MAINSTREAM HORROR. CONSIDER IT A PUBLIC SERVICE.

5 Films You Need to Watch This Halloween - Part Five: 'Near Dark' 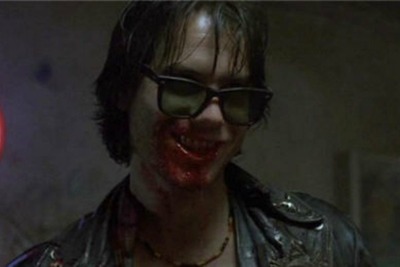 I feel kind of weird starting and ending this thing with Vampire movies, especially since I'm probably the 4,000th person to recommend Near Dark. But after having several conversations this past week with people who have never heard of it, I feel like I have a religious duty to spread the good news about this weird little ode to white trash vampires in rural Oklahoma. So make a note: Near Dark is about White Trash vampires in Rural Oklahoma.

I kid, I kid. I mean, yes, it does in fact contain white trash vampires, and it does take place in rural Oklahoma. It begins with small town cowboy Caleb (Adrian Pasdar) who meets a girl named Mae (Jenny Wright) at a bar and successfully picks her up, only to find out rather quickly that she's been sent by her crew of Vampires to pick up groceries, AKA him. For some reason she takes a shine to him and can't bring herself to kill him. However, she does manage to bite him, causing him to flip out and bail on her before she can explain his new daylight-challenged lifestyle to him. He staggers home and, moments before burning up in the Dawn sunlight, Mae's crew of Vampires grabs him and forcibly makes him a part of the gang.

That gang - Leader Jesse Hooker (Lance Henricksen) and his girlfriend Diamondback (Jenette Goldstein), Severen (Bill Paxton) and a 'boy' named Homer perpetually stuck in the body of a 12 year old boy, attempt to induct Caleb into their way of life over the next several weeks. This includes killing pretty much whenever they're hungry to survive. Poor Caleb has a bit of a problem adjusting to that little detail and can't bring himself to do it, leading to jesse's decision to force him to make his bones during a brazen, ad hoc mass murder in a redneck tavern. That scene, set to a cheesy 80s cover of the Peggy Lee classic "Fever", is a brilliant bloody centerpiece to an already blood drenched movie. Unfortunately for the vamps, Caleb still can't bring himself to kill his chosen target and lets him go, an act of mercy that leads to  showdown with local cops during which Caleb buys himself more time buy risking his life to save everyone else.  Ultimately, Caleb has to choose between his awful new gang including the girl he likes, and his human family.

The plot really isn't that important. Suffice to say, Caleb gets a happy ending and the vamps go out with sufficient karmic justice. That probably sounds ho-hum, but Near Dark's greatness isn't due to the specifics of its story. What distinguishes it from the other  Vampire movies is its radical departure from almost all vampire-related conventions. Yes, they're immortal and must drink blood to survive. But the v-word is never uttered, fangs are never produced and vampirism can be cured with a blood transfusion. More importantly, instead of the erudite, charismatic predators defining the genre since Brahm Stoker, Near Dark's bloodsuckers are ignorant, semi-literate career criminals who eke out a living killing random people and stealing their valuables. Whether it's simply a lack of vision or a defiant choice to refuse to roll with changing times, Near Dark's vamps seem utterly unaware that in the era of social security numbers and massive infrastructure (but not the Internet! The movie is from 1987 after all), it is nearly impossible for people of limited means and intelligence to simply disappear.

Near Dark's vampires remind one of lottery winners who squander their fortunes and end up destitute despite having had millions. They have no concept of restraint or discretion. Though it's true the police attention the ultimately attract is brought on by Caleb, it's also true that the other vamps don't even try to conceal their activities. They basically do whatever they want, not much, considering their lack of interest in anything aside from destruction. Even without the film's  enough brazen murders that they'd attract the coppers eventually with or without Caleb. It's unclear whether they want to die, don't care or simply lack the imagination to understand it's a possibility. It's a very interesting take on the question of whether immortality would be a blessing or a curse, the answer being 'this is why we can't have anything nice.'

But if philosophical questions dressed up in 80s white trash redneck clothes don't interest you, rest assured there's more than enough blod, gore, swearing to keep your attention. Though you'll probably never drink beer in a mug ever again.

Near Dark is available on DVD and Blu-Ray.