close
INTERVIEW: Opinion: We Offer a few alternatives to the usual parade of sequels, remakes and idiotic mainstream horror. Consider it a public service.

5 Films You Need to Watch This Halloween - Part Four: 'Phantom of the Paradise' 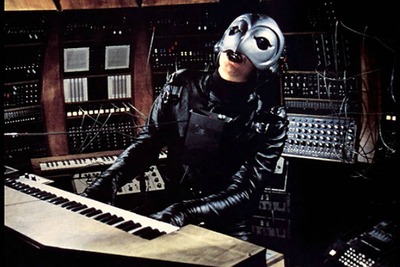 I will never understand how, despite having seen The Rocky horror Picture Show about 4 jillion times (I once even portrayed the man with no neck in an act-along presentation!), I was 30 the first time I saw Phantom of the Paradise. Released one year before Rocky Horror, Paradise is a cinematic mashup of Faust and Phantom of the Opera, with a dash of Frankenstein and Oscar Wilde thrown in that combines the talents of the director of Carrie and Scarface with those of the songwriter behind Rainbow Connection.

Yep, it's a musical. And all the songs are written by Paul Williams.

The prologue explains how Swan (Paul Williams), a world-famous (and Satanic!) record producer who made a fortune promoting 1950s nostalgia music*, now plans to ditch that scene and open a new concert hall, The Paradise, supposedly the greatest musical venue in the history of music. When the story begins, we're introduced to Winslow Leach (William Finley) a struggling songwriter currently playing backup for a crummy band called The Juicy Fruits who are auditioning for a spot performing for The Paradise's grand opening. Unfortunately, they make a living performing the same kind of 50's nostalgia Swan is in the process of ditching.

During the performance, it's obvious Winslow is absolutely miserable. What he really longs to perform are deeply personal songs that speak to the soul; soon after the Juicy Fruit's botched audition and inevitable rejection, Winslow slips back onstage when he thinks the audition hall is abandoned, and performs just such a song, Paradise's motif, "Faust":

"Faust" is Winslow's magnum opus - he even slipped the melody into one of the Juicy Fruits' terrible songs - and during his passionate, lonely performance he throws everything he is into it. Unfortunately, Swan is secretly observing Winslow from a hidden room. Immediately recognizing its brilliance, he orders his henchmen to to steal it, which they proceed to do by way of pretending to sign Winslow to a recording contract but actually tricking him into signing the rights to all his songs over to Swan in perpetuity. When Winslow realizes the dirty deed done to him, he attempts to break into Swan's mansion in order to destroy the contract. Instead, he's beaten within an inch of his life and framed for drug dealing, for which he's given a lengthy prison sentence.

In prison, he's subjected to a series of vicious experiments which result in all his teeth being replaced by shiny metal choppers. He eventually catches wind that Swan, not content with having robbed Winslow of everything, has also signed Winslow's old band The Juicy Fruits to a lucrative recording deal and hired them to play the Paradise's grand opening after all. This completely unhinges him and Winslow immediately escapes from prison and races to seek his revenge. First stop, the factory where Swan's recordings of Winslow's stolen music are being pressed. Things don't go as planned and Winslow is severely injured and disfigured. Bonus: his vocal cords are also ruined. Believed dead, Winslow sneaks into the Paradise where he acts a lot like the Phantom of the Opera and forms a half combative, half parasitic relationship with Swan. Swan tempts Winslow with riches and the restoration of his rights, convincing him to write a Rock Opera for him based on Faust, only to double deal him to the point that he even seduces a singer Winslow likes (Pennies From Heaven's Jessica Harper), just to screw him over a little bit more. We won't give away the ending, but you can guess things don't turn out well for anyone involved. Lots of gore, murder and ultimately, death by pact with Satan ensues. Even if you find yourself wondering what the hell happened, it is absolutely worth it just to make it to "The Hell of It", the film's final, bitter tribute to Swan's quest to ruin Winslow:

Phantom of the Paradise has its problems: Like Rocky Horror, despite being a musical there are long, slow patches of boring, music-free nothing that will drive modern audiences up the wall. Performances are spotty and the combination of Faust and Phantom of the Opera never matches perfectly. But it's gory, campy in the best possible way during the peak of Glam rock, and the soundtrack is absolutely incredible. Even if it will be forever eclipsed by in popular culture by Rocky Horror, it's a perfect companion piece. It also has the benefit of not having been seen 40 million times.

But in case none of that convinces you, here's the Trailer.

Phantom of The Paradise is available on DVD and Blu-Ray; and the Soundtrack album is also worth your money.

*The satire here isn't as biting now as it was in 1974, the year after American Graffiti's success spawned a wave of nostalgia for the Eisenhawer years.