close
OPINION: Opinion: We offer a few alternatives to the usual parade of sequels, remakes and idiotic mainstream horror. Consider it a public service.

5 Films You Need to Watch This Halloween - Part One: 'Blood on the Highway' 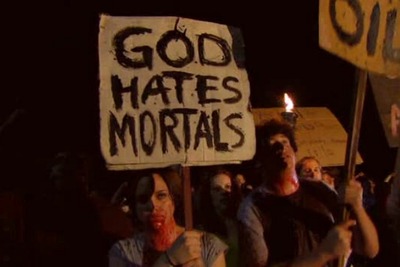 Somewhere in between Sam Raimi and mumblecore, Blood on The Highway is microbudgeted, excessively violent and often hilarious parody of both the vampire and creepy small town genres. It miraculously manages to transcend its bargain basement production values and amateurish acting with a witty script, some genuinely disgusting carnage, and a pointed critique of the way Big Box shopping centers have destroyed the economic base of rural America.

It follows Bone, Carrie and Sam, 3 frenemies on their way to a Dudebro Rock fest somewhere in the South who get stranded in Fate, Texas and find themselves under attack by an increasingly large population of vampires representing the very worst that small town America has to offer. Big Box retailer <strike>Wal-Mart</strike> Consumart has recently built a new supercenter, and the grand opening celebration resulted in most of Fate's population being turned into ravenous, surprisingly stupid vampires. Our protagonists encounter Gun nuts, homophobes, even vicious Christian fundamentalists who retain the wretched core of their awful personalities even into death. The result: instead of the usual unstoppable army of the undead, you get a hyper religious, extremely prejudiced redneck Lynch mob bent on purging Fate of its remaining living citizens with the same enthusiasm their counterparts in previous eras went after unpopular minorities or the local library. (it's also a funny riff on a concept from I Am Legend by Richard Matheson.)

The retention of a backwards, insular culture, also the source of some funny jokes about the understood 'rules' of vampires and, because two of the 3 main protagonists are absolutely terrible people, the importance of not treating your friends like shit, is only one of the BOTH's many original takes on the tired Vampire genre. There's also funny stuff about the uselessness of libertarian militia types and the inability of people to set aside their differences even when death is on the line. When the whole thing comes to a head in the newly-opened Consumart, where Blood on The Highway basically calls Wal-Mart (and stores like it) an economic vampire, the film actually asks whether or not the destruction of rural America actually cost the country anything worth saving.

That isn't to say BOTH is particularly political or unfairly mocking of the South. Co-director and Co-writer Blair Rowan actually is from Texas. This is more the kind of pointed mockery that can only come from intimately knowing and loving a place, even if it annoys the hell out of you. Blood on The Highway is mostly about riffing on the cliches of horror movies, and is appropriately full of blood and gore, some sex jokes and a constant, unrelenting sense that people can just be terrible for no reason.

Due to the mostly amateur cast - the two biggest name actors are Henry: Portrait of a Serial Killer's Tom Towles and Buffy The Vampire Slayer's Nicholas Brendon, both basically inflated cameos - and the tiny budget, it does meander around the quality map, but it's very well written, extremely well-informed about the conventions and cliches of multiple horror genres, and most importantly, funny and disgusting in equal measure.

Blood on The Highway has appeared in a handful of theaters and several festivals. It's available for rental on Netflix (DVD only), and can be purchased on Amazon. Here's the trailer.